Welcome to an ongoing inquiry about the behavior of people and dogs.
Blog Home >> Animals and the People Who Love Them >> Repeating Cues: Information or Affect?

A blog reader asked a great question recently, in response to my comment that I couldn’t help myself and repeated “Stay, Stay, Stay” to Willie when in a dangerous situation at the side of a busy highway. We all know that repeated cues, like the ever popular “Sit, Sit, Sit” are not exactly “best practice” in dog training. And yet, they are commonly used, especially by beginners; just go to any Beginning Family Dog Training class and you’ll hear repeated cues thrown around like confetti at a homecoming parade. It was that very occurrence that helped inspire me to write The Other End of the Leash, about how the evolutionary backgrounds of people and dogs both help us (we’re both crazy social and insanely playful) and hurt us (direct facial contact is polite to people, rude to dogs). “Sit, Sit, Sit” sounds a lot like “Wooo Woo Woo” coming from a chimpanzee, and that is not a random association. But why? Why do we repeat ourselves like agitated apes, and why is it so hard to stop? We all know why it is a problem in training: If you want your dog to sit the first time you say “Sit” you are teaching the opposite if you say it three times in a row.  But besides wondering why we do it, might it be useful, ever, to repeat ourselves?

First of all, why do we repeat ourselves when it makes no sense? A look at the science of vocal communication is helpful here. We know that individuals who are emotionally aroused tend to produce short, repeated vocalizations. Think of repeated whines from a needy dog, whimpers from a child upset about something, and your own predisposition to repeat yourself when you are nervous. In The Other End of the Leash I talk about a good friend who had never ridden, and yet was inappropriately placed on a nervous, high strung horse. The faster the horse went, the more my friend said “Whoa! Whoa! Whoa!” and the more he did the faster the horse went and the faster the horse went the faster he said “Whoa Whoa Whoa”… You can well imagine that it did not end well.

This linkage between emotional arousal and short, repeated vocalizations is so common in mammals that some speculated that all animal vocalizations were nothing more than indicators of their emotional state. As arousal increases, so does the rate of vocalizing. Thus, it makes sense that when we are nervous we tend to repeat ourselves, and who isn’t nervous the first time they take a dog into a dog training class, no matter how kind and benevolent the instructors?

But there’s more to vocalizations than the internal state of the producer. An important aspect of my dissertation research was to shift the focus and look at a sound’s effect on the receiver. I had found that across language groups, cultures and species of receiver, people use short, rapidly repeated notes to speed animals up, long and slow ones to soothe or slow them and one sharp sound to stop a fast moving animal. And the study I did on puppies showed that they indeed were more active in response to short, repeated notes than to long, slow ones. That’s why I argued that sounds do more than provide information about the internal state of the producer (or predict future behavior), but can be used to influence the response of the receiver.

Go back now to the story I told in a recent blog about having to get Willie out of his crate beside a busy highway. Picture cars and trucks whizzing by at 65 miles an hour, a huge bleeding, flapping beast barely contained by Jim’s arms, and me needing to open the crate in the back of my RAV to get Willie out and put the turkey in.  Describing everyone as “aroused” is appropriate here: If Jim had lost the turkey it could have fallen/ran/flown just a few feet into the highway and caused a horrible accident. If I didn’t handle Willie right he could have been killed. Tom Turkey must have been the most agitated — injured and now captured by monsters, he must have been terrified.  Here’s what the scene looked and sounded like, as best as I can describe it:

I opened the door to the back of the car (the door to Willie’s crate facing directly to the back). While holding my out, palm toward Willie in the universal “Stay” signal, I began repeated “Staaaaaaay, Staaaaaay, Staaaasaay” before I opened the door to his crate. Notice there were two important variables the sounds I used here: I repeated myself, but I was using looooooong, sloooooooow notes designed to keep Willie calm and still. I was also consciously keeping my voice low, the better to sound confident and even somewhat inhibiting to a dog. Thus, there were 2 functions to my “cue.” One was using sound to inform Willie what I wanted him to do. The other, which over rode the first,  was focused on using sound to influence his emotional state and motor activity levels. This had an indirect benefit on me, in that speaking as I did acted to calm me as much as it did Willie. (Not a small benefit at the time, believe me.)

Was that a “perfect” use of sound in that context? Nope, I don’t think so. It was adequate, and it worked, but here’s a tweak that would have made it better. Ideally, now that I have time to think it through, it would have been better if I had said “Staaaaaaay” once, and then, as Willie did stay (which he did, bless him), I should have said “Gooooooooooood boooooooy” and repeated it as long as I needed to until I had him safely by the collar. That avoided repeating a cue (and thus undercutting the power of it when spoken once) but would, at the same time, serve to keep all of us calmer and safer.

Lots to think about here: First, think about what you say to your dog. Are you using vocal cues to convey information, or to influence your dog’s emotional state? And how do the sounds you use influence your own internal arousal levels? I’d love to hear your thoughts about this. Heaven knows I will never use sound ideally in every context (I have been known, on occasion, to shriek like a five-year old when truly panicked) but I find the more I understand about acoustic communication the better I am at it. You?

MEANWHILE, back on the farm: Welcome to July. It’s been in the 80’s most of the week. About six weeks of growth has occurred in 5 days. I’m serious, it is absolutely strange and weird and seems to be acting as a kind of ink blot test: The people that I know who are most connected to the land are both confused on some deeply primal level and frantic about how to get six weeks of gardening/farming/spring chores done in a few days. Others, who live less earth-bound lives, have fewer concerns and are thrilled with an early spring. This makes sense. It’s all good if you don’t have to worry about killing the thistles before it’s too late and they take over your pasture at the same time that you need to prune the raspberries, get ready for lambing, weed the gardens, worry about insect pests and parasites that didn’t get killed off over winter that usually do …… You get the idea. I have learned to smile and celebrate with my more urban friends and commiserate with my country ones and take it one day at a time.

Here’s some of the good parts of our early spring. And there’s lots of it. It’s gorgeous now: Tiny leaf buds that define the color “spring green,” cheerful, nodding daffodils, and carpets of my favorite spring flower, Scilla. We got some great rain yesterday and last night; it was getting terribly dry, so that was a good thing. We are also expecting a cool down… back to the 60’s (still 20 degrees or so over normal for this time of year) instead of the high 70’s and low 80’s. The only down side of the storm is the discovery that little Tootsie girl has Thunder Phobia (which I learned around 3 am this morning, our first thunder storm together). Poor kid. We’ll just add that to the list we all have of “Things to Work on For Our Dogs: Treating Thunder Phobia.” Oh well, what else is there to do, right?

Here’s hoping that you are enjoying your own weather….and perhaps some flowers as pretty as these daffodils. 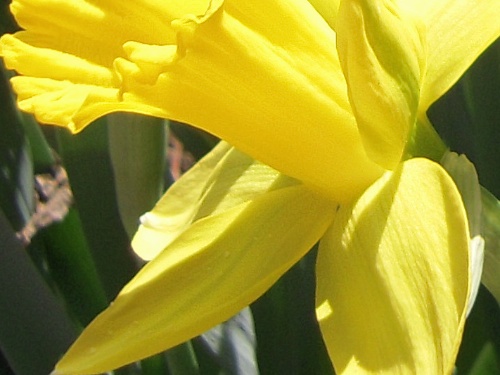 Here’s a carpet of Scilla (or Siberian Squill) under a Dogwood bush from Tootsie’s perspective: 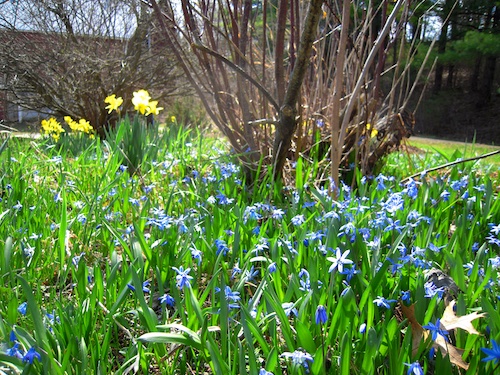