Welcome to an ongoing inquiry about the behavior of people and dogs.
Blog Home >> Animals and the People Who Love Them >> Saved by Dogs: Tiny Treasures

Like many of us, I am finding the world to be increasingly worrisome. Between feeling physically sick about the non-ending reveals of sexual assault and harassment, the relentless attacks on the environment on our fragile globe, and political ideologies based on hate and fear–well, thank God for dogs.

There are days I honestly feel like my dogs are keeping me sane. Here are three tiny things that each of my dogs did that made me feel deeply, truly happy, if just for a moment. (I’ll tell you mine if you’ll tell me yours.) 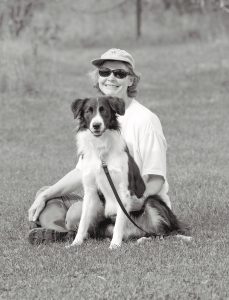 WILLIE: Saturday morning I nestled in bed while Jim took the dogs outside for their early morning pee. (The dogs, not Jim.) Suddenly I heard barking. It took me a moment to realize it was Jim barking at a pack of coyotes over the hill. Both Jim and I had learned to bark after our last livestock guarding dog Tulip died and there was no one but us to keep the coyotes away. (Making a sound like “Bark” has no effect on coyotes, but yelling out a series of deep, low “Woooooofs” shuts them up instantly.) The Border Collies have never barked at coyotes, but after we began filling in for Tulip, Willie would stand next to us and look confused.

One night, Jim and I ran outside at two in the morning to bark away a pack of coyotes just across the road from our newborn lambs. (Picture two elderly-ish people in bathrobes and slippers, barking at the top of their lungs while standing on a Midwestern front porch. It’s a cartoon waiting for a caption if there ever was one.) Willie stood beside us, silent as usual, until just as the coyotes quieted and our voices got weaker, he let out one quiet Boof. Not Woof. Boof. You know, the kind in which a dog’s mouth is closed, but a little bark pops out almost beyond the dog’s control.

“Good boy!” I said. “Bark, bark, Willie, bark bark.” Jim and I kept barking enthusiastically until Willie let out a louder vocalization and then another. Ever since then, dog and humans stand and bark side-by-side whenever we hear the coyotes. (Maggie stands around, presumably as confused as Willie used to be.) I have no idea if Willie wonders why we are barking–he has always barked at cars pulling up in the driveway, but never at the sound of coyotes–but the fact that we now join in together to protect our farm warms my soul. 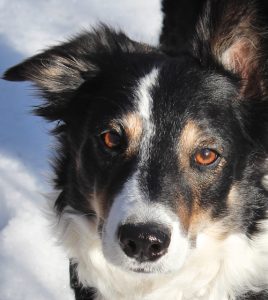 MAGGIE: A few days ago I was digging weeds out of the rose garden while Jim was putting up the Christmas lights. (Note: These things do not happen on the same day during a normal year in Wisconsin. But then, what is normal now?) Maggie and Willie were outside with us. After hauling out yet another long dandelion root, I heard a noise behind me. Maggie was enthusiastically digging her own hole in the grass a few feet away, her face shining, her paws the color of earth.

Maggie isn’t a digger. I don’t remember her ever digging a hole until then. I can only conclude that after watching me dig she decided that digging is what we pack members do, and she’d like to do it with me. Not wanting a hole in the grass, I quietly said “No, Maggie, we don’t dig there” and resumed my work. The next day she began digging again beside me as I weeded another garden, and this time I redirected her to another activity.

Saturday I was weeding in another area (I spend a good deal of my life weeding, it’s the price of all those flowers) and Maggie again appeared beside me. This time, she simply lay down a few feet away and stayed there for over a half an hour. That simple act overwhelmed me with it’s power and its implication. We have a huge yard, and there are endless things that Maggie could have been doing in it. But Maggie’s behavior showed that most of all she’d like to be with me, even if she couldn’t do what I was doing.

I’m sure this sounds trivial to many–but it is so easy to take our relationship with dogs for granted. It’s nothing less than a miracle that individuals of another species have become members of our family. Maggie’s simple act of friendship felt profound at that moment, and it warmed my heart for the rest of the afternoon. 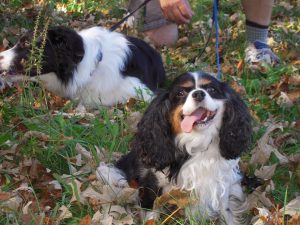 TOOTSIE: Tootsie is getting old. She is probably fourteen or fifteen; no way to know for sure since she was rescued from a puppy mill years ago. Her hearing is bad enough now that she doesn’t wake up when we come home; we have to go over to her, stroke her soft shoulders and quietly say hello. She wakes up like a bad actor in a B grade movie, emphatically blinking her eyes and shaking her head, until she finally rises to lick our faces. We suspect that her eyesight is fading, and like so many older dogs, her sleep seems to be deeper and deeper every month. A few times I’ve gone over to her and had a stab of fear that she wasn’t even still alive.

But, Tootsie becomes the expression of all things joyous and ecstatic when it is time for us to leave and give the dogs their customary treat. Willie and Maggie dash into their crates, while Tootsie leaps and spins like a puppy in anticipation of the greenish, dental-cleaning goody that I call the cocaine of dog treats. She is happiness itself, an ear-swirling, eye-gleaming symbol of joy in its purest form.

We adult humans rarely feel this purity of emotion, and if we do we tend to squelch it. Tootsie reminds me every day that tiny moments of delight are all we can really can expect from the world, and that we’d better savor each and every one of them when they come. Send us your tiny dog-related treasures; I think I can speak to the village to say that we’ll all love reading them.

MEANWHILE, back on the farm: Cook, garden, work my sheepdogs, see friends. That’s about as good a weekend as it gets. Not to mention the sunsets. What is going on with them? They’ve been amazing the last week.  Here are some photos that Jim took on the way home last week. 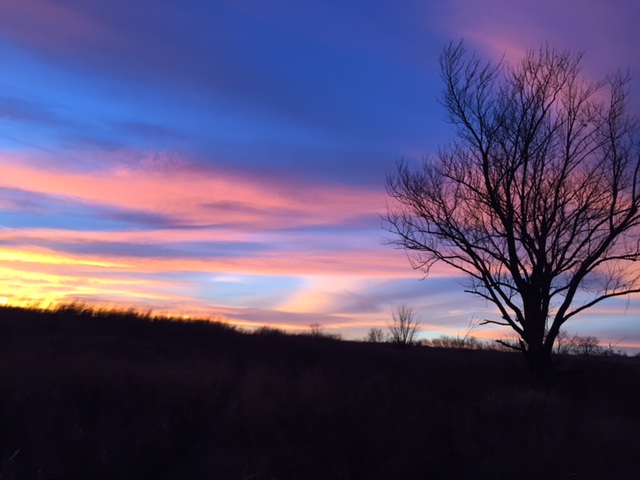 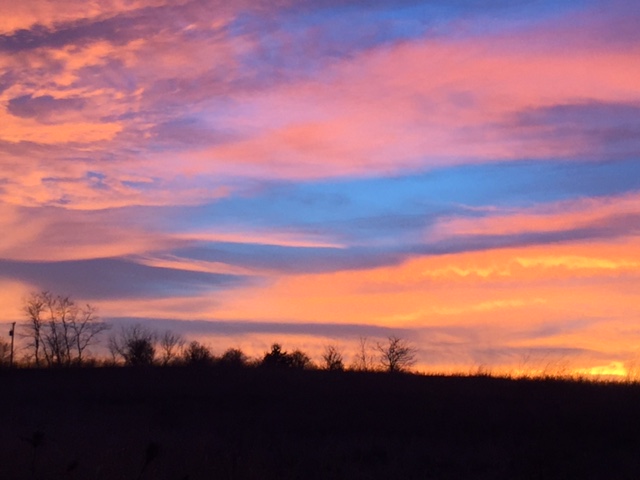 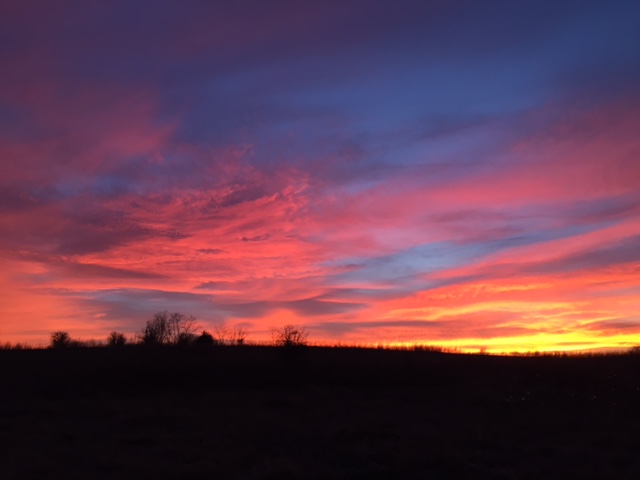