Welcome to an ongoing inquiry about the behavior of people and dogs.
Blog Home >> Animals >> Secondary Emotions in Animals

I’m working on an article for The APDT Chronicle on what are called “secondary emotions” in non-human animals. I have an article in the latest issue (May/June 2009) about “primary emotions” like fear and anger, and am following up with a smaller one about emotions like jealousy, guilt and empathy. I guess it’s obvious from my last big book, For the Love of a Dog, that I’m fascinated by the topic of emotions in other animals, and equally fascinated by our perception of them.

Almost by definition, primary emotions are accepted as occurring in a wide variety of species; and yet, I’ve had numerous people disagree with the concept that animals can experience some of them, with the most concern about attributing anger to non-humans. (As I’ve written earlier, anger is an extremely primitive, basic emotion, and denying the existence of it in other mammals is hard to justify once you know the biology behind it, but it seems to be important for people to try.)

There is much more controversy and confusion over what are called the “secondary emotions” in animals, which are generally argued to exist only in humans, and are believed to require complex cognitive abilities often uniquely attributed to us, including self awareness and what’s called “theory of mind.” These emotions, like jealousy, empathy, pride, guilt and shame can be further categorized as “self-conscious emotions” like jealousy and “self-conscious evaluative emotions” like guilt and shame. The “evaluative” modifier refers to the requirement that the experience of guilt or shame is based on evaluating a behavior against a rule or standard that is understood by the individual experiencing it.

I’m reading an interesting article related to all this in Cognition and Emotion (2008, 22(1), 3-20) by Morris, Doe and Godsell about secondary emotions and the perceptions of pet owners. The authors do an excellent job summarizing the controversy, arguing that secondary emotions are not necessarily uniquely human, and describing a study in which pet owners were asked if a list of primary and secondary emotions were observed in their pet (including dogs, cats, horses, birds, rats, rabbits….). In a second study, they asked owners to describe the situations in which the emotion of jealousy occurred. (“Can you give examples of the situations in which your dog gets jealous?”) Needless to say, this is tricky stuff–publishing an article in a scientific journal about what owners think of their pets–and in my opinion, the authors did a great job with it. I especially like their thoughtful discussion about the value (and problems) of owner reports, including the obvious fact that just because someone thinks their dog is jealous doesn’t mean that their dog is jealous.

They address these issues extremely well, and conclude by, in part, arguing that the behavior described by the owners (as the basis for their perception of jealousy) are the same behaviors described as jealousy in humans. In their study the context of the presumed occurrence of jealousy always involved a triad of people and animals, in which one animal attempted to divert attention away from another by pushing between the other two or vocalizing. Thus, they focus on the behavior of the animals, showing that the “jealous” animals did exactly what humans do when we label their behavior as motivated by jealousy. They correctly argue that this is not proof that non-human animals experience jealousy, but that it is important information that suggests we should at least seriously consider it. Here here.

Note that for this second study they focused on what I think of as the “simplest” of secondary emotions: jealousy. I’ve long argued that jealousy is simply a form of anger (“I Want It, You Have It and I Don’t and I”m Angry about It.) It seems logical to me that the other secondary emotions are indeed the result of a more complicated type of cognition . . . but, what do you think? Can dogs be guilty (fyi, I’m not saying they can’t, but think this is the emotion most often MIS-attributed to dogs). Can dogs feel shame? True Empathy? I’d love to get a conversation started about this….

Meanwhile, back at the farm: Spring is in all its glory and I honestly don’t know how it could be more beautiful. Here’s our giant Lilac bush, back lit by the Sunburst Locust and the Oak/Hickory forest across the road: 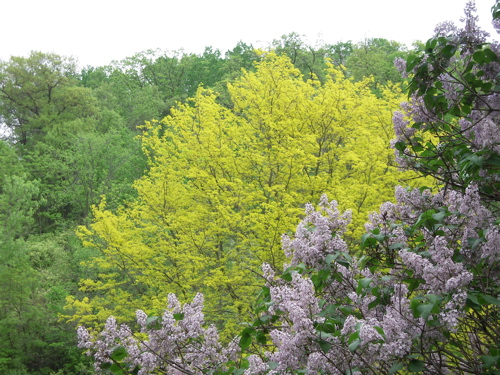 Redford is now safely  ensconced at Jim and Peg’s beautiful farm. It can be dangerous to put two unfamiliar rams together; they are highly territorial and can injure or even kill each other. We talked at length about how to make the transition safe: the standard method is to put them together in a pen so small that they can’t back up and ram into each other with any force. Peg also got two “ram shields” that block their forward vision and are reputed to prevent aggression. She thought she’d use them once she let the rams out into a bigger pen after a few days–she’s had rams stand side by side in small pens for a few days, and then immediately back up and shake the ground with the jack hammer-like force of their bony heads smashing together.

After thinking about it, she decided to put them in adjacent small pastures at first to let them become familiar. I agreed with the plan, and with a bit of “loading-into-the-truck” drama, we got Redford settled in a small pasture with a couple of wethers (neutered males) beside the Katahdin ram, who I call Chili Bean.

Peg went to check on them a bit later, and found that Redford and friends had crawled on their knees through a low, tiny hole in the fence…  and cuddled up to Chili. Here are the boys now, best of friends and potentially amused at all of our concerns. . .(could that be a secondary emotion in sheep, best labeled “amusement brought on by the behavior of humans”?) 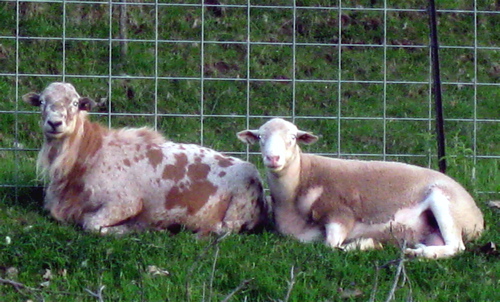