Welcome to an ongoing inquiry about the behavior of people and dogs.
Blog Home >> Animals and the People Who Love Them >> “Self-Control Depletion” & Dogs

This post could be sub-titled “No, a tired dog is not always a good dog,” or alternatively, “Why We Choose Pasta with Cream Sauce Over Vegetable Soup on a Difficult Day.” Okay, maybe it’s just me that makes poor decisions about lunch when I’m exhausted, but this research suggests that I, along my dogs, are not alone.

A study by Miller et. al. followed up on earlier work about the effect of self-control on risk taking and decision making. (“Too dog tired to avoid danger: Self-control depletion in canines increases behavioral approach toward an aggressive threat.” Psych Bull Rev 2012 19:535-540.) Here’s the background to this study: Multiple studies on humans have found that we appear to have a limited amount of self-control (A shock to us all, no doubt). It is as though we have a bank account of energy devoted to self-control and once it is depleted, we are unable to spend any more. For example, people told to control their impulse to eat fresh cookies (versus radishes) gave up faster on attempting to solve a difficult puzzle. Subjects who were asked to spend some of their “self control savings” were more likely to take risks and put themselves in dangerous situations more than those who had not “used up” some of their self-control energy.

This tendency is not just limited to a particular type of task. Rather, it is “domain general,” meaning self control on one task effects behavior in a variety of other types of tasks. Thus, as in the example above, the energy exerted to not eat cookies affects the energy available to solve a puzzle, even though one task is related to food and another to problem solving.

Neither is this tendency limited to people. Miller et. al. found in 2010 that dogs asked to control physical movements also gave up sooner when later asked to solve a puzzle task than dogs who had not. For this study, they asked if dogs were more likely, as are humans, to take more risks after a session of “self-control depletion.”

I’ll quickly summarize the methods and results here, and then add a discussion about what I think are the practical implications. Ten dogs were asked to either maintain a sit/stay while an “electronic hamster” buzzed around the room, or to be caged with no need for self-control. Each dog was its own control, meaning that each dog experienced both conditions, an excellent decision here given the small sample size and the question being asked. Which condition happened first was randomly balanced to eliminate order effects. After a 10 minute period of either being on a Sit/Stay or in a crate, the dogs were escorted out of the room briefly, while a highly reactive dog was put into a cage at the back of the room. The subject dog was brought back in and the researchers scored how close the subject dogs got to an unfamiliar dog barking and growling at the subject dogs. (The authors managed safety well, by putting a pen around the crate in which the barking and growling dog was kept, but I’ll comment about the effect on the “stimulus” dog in a minute.)

As expected, the data show a significant difference in time spent close to the aggressive dog depending on the dog’s experience just before. After the dogs maintained a Sit/Stay, (if they broke their owner returned to the room and had them Sit/Stay again), they spent more time close to the threatening dog than when they had been left in a crate for the same amount of time. The conclusion is that, like people, dogs take more risks and have less impulse control if they have depleted their stores of self control. This is the kind of result that confirms my experience and world view: that dogs, like people, have a limited amount of energy to spend on self control at any given time. I’ve seen what I think are the consequences of this over and over with my client load: Dogs, for example, who were “angels” all day long at the picnic and then finally bit someone after 5 hours of not stealing hot dogs off the table at the park. I suspect it also has a profound effect of dogs on leashes, because even though the leash is a constraint, the dog still has to exert a lot of self control to not explore the environment as he or she chooses.

However, (and there is always a “however” in science!), there is one aspect of the methodology that might make the results a bit less clear than one would hope. In the “Sit/Stay” condition, a mechanical toy was released that buzzed around the room, thus forcing the dogs to exert a great deal of self-control to maintain their stays. All good. But in the “Crated” condition, the mechanical toy did not move around the room. The authors stated that their pilot studies found that if the toy was turned on, it caused some of the crated dogs to “whine, circle and paw.” I’m unclear as to why this would be a problem: surely dogs allowed to whine, circle or paw would be dogs NOT using energy on self control. As is, one could argue that the study was comparing levels of arousal as much as energy exerted on self control. I’ll email the authors about this and let you know what I find.) [Note added after Dr. Miller herself responded in the comment section: You are best off reading her comments yourself, which I found extremely interesting, but after reading her response I am more comfortable with the conditions as designed in the experiment. Bottom line is that in one condition dogs had to exhibit a great deal of self control, and in the other condition, they did not. That was the basis of the study, and I found her explanation compelling. Again, read the comments for an extremely interesting discussion about all this if you are especially interested in the topic.]

What do you think? I’d love to hear your thought not just about the study and the two conditions, but whether its conclusions fit your experience. Although I question some aspects of the methodology, my experience suggests to me that “self-control depletion” is an important factor in behavior. That is true as much for our dogs as it is for us: Haven’t you found yourself, as a dog owner or trainer, making poor choices after depleting your bank account of self control? We tend to think of it as just “being tired,” but I think recognizing that “tired” has many nuances might be extremely helpful. In addition, “tired” can mean so many things: Well exercised dogs are very often better behaved dogs, but dogs over tired either physically or emotionally are not, right? I look forward to your thoughts and experiences, and I’ll be thinking all weekend about how this perspective might affect the individuals at both ends of the leash. (I should also mention, briefly, that I wish the study could have been done without subjecting the stimulus dog to being confined in a crate while clearly  uncomfortable around other dogs. But I do understand their desire to create a realistic context of “risk” for the dogs, I just wish it could have been a different one.)

MEANWHILE, back on the farm: Argh! This is a tough time for people who like to be outdoors. The temperature isn’t too bad (was about 12 when I got up, not too bad for this time of year, and it’s been over freezing during the day for much of the week), but it is extremely difficult to walk anywhere. Either it is ice suitable for a skating rink, or snow that was half-melted by rain and then re-frozen into a hard, frosting-like surface that is hell on your feet and exhausting to walk in.  Willie and I both have a serious case of cabin fever, so I am going back to seeing if he can learn words as nouns instead of objects in the evening hours. Tootsie is happy to cuddle on the couch, and the sheep and the cats seem to be doing just fine.

The good news is that there is a lot to look forward to. Not too long from now students from the Small Ruminant Club at the UW Vet School are coming out to learn how to do ultrasound pregnancy checks on sheep. My flock “volunteered,” they just don’t know it yet. We’ve done this several years in a row, and after the work in the barn we come into the farmhouse for chili, salad, bread and pie, and have a great time sharing our love of animals and interest in their health. Then I leave on the 28th for San Diego for the Interdisciplinary Forum on Applied Animal Behavior, where I will glory in flowers and greenery, 2 days of intellectual stimulation and, if things go as usual, laughing so hard my ribs begin to hurt. And this Sunday we’re going to see West Side Story, so cabin fever is beginning to be relieved.

More good news is that, after endless days of clouds, rain, and sleet, the sun has come out and it is such a lovely thing to see. It felt like a dear friend coming home that I had missed. Here’s one of the ewes, Solo, highlighted by the morning sun when I went out to check on the flock earlier today. I always feel a bit sorry for her, she came with 2 others from another farm and after they left was clearly the “odd girl out” in the flock. But gradually she is being assimilated, and I hope she feels more at home here. I’m curious to see how her lambs are (due April lst, there’s another thing to look forward to!) 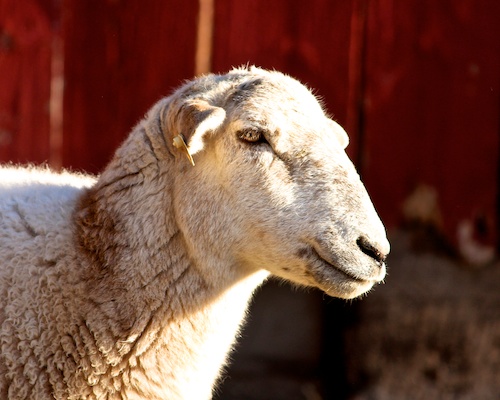 « How Do You Play with Your Dog?
Blog Redesign and Open Mike »