Welcome to an ongoing inquiry about the behavior of people and dogs.
Blog Home >> Animals >> Seminar Registration Open!

With virtually no objectivity what so ever, I’m excited to announce that registration is open for a completely new seminar, to be held in Madison, WI on October 29th & 30th. I’ll be working much of the summer on creating an up-to-the-minute summary of what we know about canine behavior and cognition for Saturday, and Ken Ramirez, simply the best animal trainer I know, will knock your socks off with his presentation on Sunday about how to solve training problems and use reinforcements in a way you’ve probably never thought of before. Last summer I left his seminar motivated to train anything that breathed before I could get home to Willie. (I can report that it does not work on TV remote controls in hotel rooms, and okay, granted, remote controls can’t breathe, but I was unable to stop myself from trying.)

I know, I’m not an objective source (I’m doing the presenting on Saturday), but I’m already looking forward to both days. After being frustrated for almost twenty years about how little research was being done on dogs, FINALLY dogs are hot in science and there’s some great new information out there about training, behavior and cognition. I’m not the only one who is excited. We’ve already gotten registrations from as far away as Arizona and it’s only been announced for two days. I truly hope you can join us. If you do, promise to come up and say hello and introduce yourself as a blog reader.

MEANWHILE, back on the farm: Willie, Jim, Brittany, Dorothy and Barbie and I actually left the farm today to do a herding demonstration for my University class. The ewes Brittany, Dorothy and Barbie did not exactly volunteer for this assignment, but they’ve all done it before and weren’t particularly stressed about it. Dorothy and Barbie ran right up the ramp, bless their hearts, but hefty Brittany (she somehow manages to eat twice as much as every other ewe at the farm) had absolutely no intention of getting into the truck. I don’t like letting dogs bite my sheep, so even though Willie was in back sending out “Let me at her!” thought bubbles, Jim kindly pushed and prodded Brittany’s huge frame up the ramp and into the truck.

Brittany, by the way, came to the farm with her sister, Paris (yes, you’re getting the connection here). I named them when they were quite young, before I could have predicted that Brittany would be, uh, with child as a teenager, and Paris never got pregnant after 3 years. Needing my ewes to produce as I do, Paris has moved on to other pastures, while Brittany pumps out lambs like a factory. Maybe if I taught her some dance moves she’d lose some weight.

Willie was a super boy at the demo, I was very proud of him. It’s his third time there (he’s 4 now), and it’s fun to watch him each year as he matures. The first year he was very nervous, and I didn’t let him do much, relying on a dear friend to do most of the demo’s with another dog. Last year he performed well, but was clearly still more nervous than at home,but this year he worked pretty much like Willie at the farm. This was especially nice  because we were doing well with our 2011 commitment to work Willie off the farm until the snows came, but for the last six weeks we’ve been shut down by deep snow. It was fun to finally be able to work him on sheep, even if it was in a small arena. At the end some folks from Animal Sciences brought in a horse and did a great natural horsemanship demo. Was just lovely (thanks Liv and Fawn!).

We didn’t get any photos today, but here are some from the same place from last year. 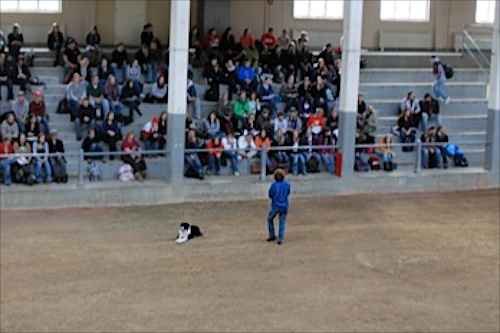 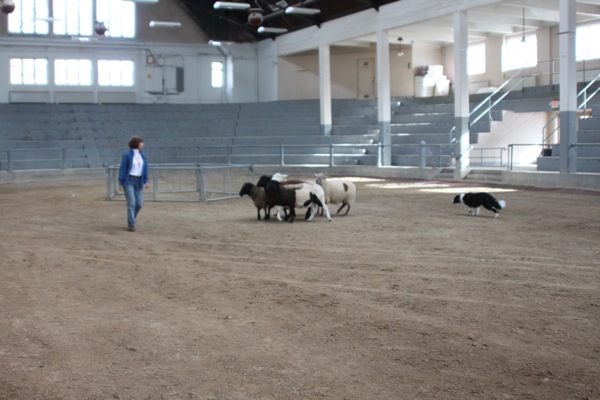 « A Valentine to Willie
Are You “All Positive?” »