Welcome to an ongoing inquiry about the behavior of people and dogs.
Blog Home >> Animals >> Sheep Shearing

I promised a post on “how much training/attention” should we be giving our dogs, and it’ll come, I promise. However, I’m a tad under the weather today, and since I wrote this part up yesterday I’ll post it now, and pick up the training topic soon. Fact is, things are pretty crazy here right now. Besides speeches (thanks SAVMA for having me!), finishing grading 150 7-page exams, new lectures, and the usual daily work load, I agreed to be a grant reviewer for NIH (Nat’l Institute of Health). They are due this Friday, then I fly to DC for panel reviews (and an appearance on Diane’s Rehm’s radio show… I just love her, so that’s a great perk.) If I’d known how much work these reviews would be, well… not so sure I’d have said yes. But it’s interesting, very interesting. But more on the training schedule issue soon, because I think it’s something that’s important to many of us.

Meanwhile, back on the farm: Shearing went off without a hitch Saturday morning; what a treat to see the sheep’s bodies without their coats of wool or hair. Turns out they weren’t as chubby as I thought, and given that they are due as early as two weeks from now, they’ll be getting more food for breakfast and dinner. High time, I’m sure they’d say. They are on extremely nutritious hay, glorious stuff rich with lots of alfalfa leaves, but the more the better from their perspective I’m sure. The day of shearing was cloudy, windy and damp, so I kept them inside the barn. Today it’s breezy but sunny and toasty (50’s!), and I’d bet that they are thrilled to be outside, in the sun and gnawing on tiny new shoots of grass. (New shoots! Bulbs poking green leaves above ground! Be still my heart; I’m almost afraid to believe that spring is really coming… of course, there will be lots more cold days, probably lots more snow, but still, the progression is inevitable and oh so welcome.)

I couldn’t resist experimenting with an old farmer’s trick passed on through a comment on the blog (thanks!) about anointing the sheep with Mennen’s After Shave before turning them loose after shearing as way of decreasing aggression. Given that last year Truffles and Dorothy looked like they were auditioning for a segment on “When Animals Attack” (see photos March 16th, 2009) , I thought I’d try it. I didn’t have any Mennen’s, but hey, I did have Evelyn & Crabtree Body Mist (Nantucket Briar, ummm, just love the smell), and I figured that any strong scent would do. So immediately after they were shorn I backed them into a corner and sprayed them all. At first they scattered from left to right, but after a few sprays they stood still and let me spray them all over their heads and necks. Did they like it? I swear I think they did. Sheep are very quick to run away from anything they don’t like, and either they were going into tonic immobility (which is highly doubtful), or they honestly liked the smell. And, amazingly, I saw almost no aggression between them. There was a brief moment of head-on-head pushing, but that was it.

The shearer wasn’t surprised; he is convinced that it’s not a visual difference that causes the problem, but that the sheep smell different after they are shorn. Once you take off their wool, which is full of lanolin and a unique slurry of individual scents, they smell very different than they did before. (Sort of like cats when they come back from the vet clinic?) Our experiment certainly supported that hypothesis. (And oh wow did the barn smell good.). Thanks for the tip!

Here’s Redford in “ready to shear” position. Sheep in this position look relaxed, but this probably IS case of tonic immobility… their cortisol readings are elevated when they are in this position, but they do get quiet and passive, which makes shearing much more pleasant for everyone. (The legs belong to Jerry Ace, who is the best shearer I’ve ever had; he is calm and gentle, even when the sheep are not, and there wasn’t one nick or scratch on my sheep. So lucky to have him.) 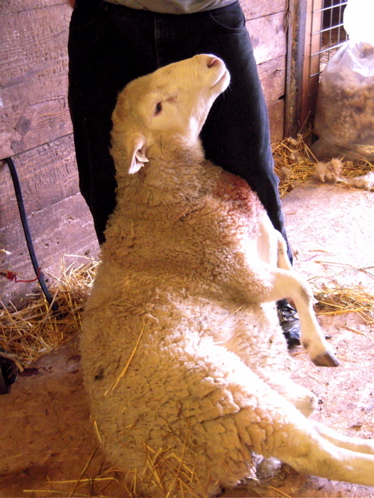 The next photo is of Dorothy, my oldest ewe, with her beautiful fleece almost off. The brown wool in the middle is the top of her fleece (which gets bleached by the sun), the darker wool on the sides is the inside, skin-side, of her fleece. She and Barbie have gorgeous wool, which will go to hand spinners for cleaning, spinning and knitting. 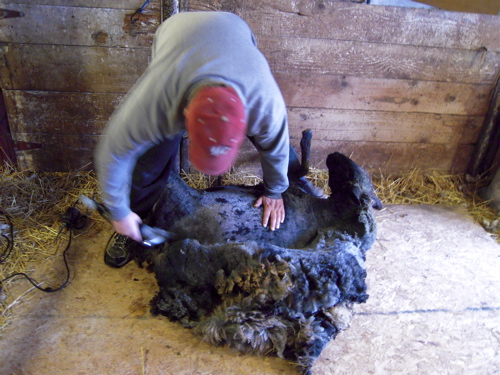 And here’s most of the flock after shearer was completed. That’s Brittany Spears looking at you (the white one with dark legs), who is indeed a bit of a pudge. She’s the one who crawls into the feeder to get more food–a woman after my own heart. 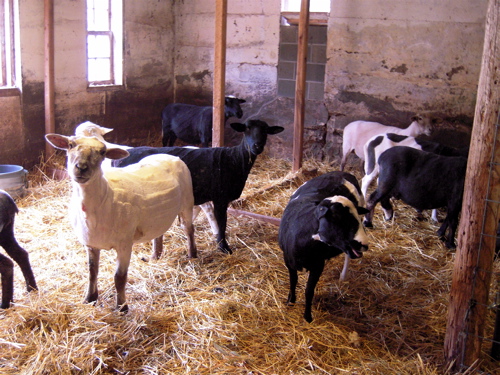 « Training Schedules
How Much is Enough? »