Welcome to an ongoing inquiry about the behavior of people and dogs.
Blog Home >> Animals and the People Who Love Them >> Size Matters

Here’s an interesting study that came out in 2010 comparing the perceptions, behavior and training of larger versus smaller dogs (“Behavior of smaller and larger dogs:  Effects of training methods, inconsistency of owner behavior and level of engagement in activities with dogs.” Arhant et. al. Appl An Beh Sci 123 (2010), 131-142.)

There’s a lot in this study, based on 1,276 questionnaires, but the part I want to talk about today relates to owner’s perceptions of dogs of different sizes. I’m always suspicious of data from surveys about behavior, since what we think an animal does and what it really does is often not the same, but because these surveys were about perceptions as well as behavior they definitely have some merit.

The authors found that, as they summarize in the abstract, “.. smaller dogs are seen as less obedient, more aggressive and excitable… and more anxious and fearful.” Note that this doesn’t mean that they are, but that they are perceived to be so. They also found, no surprise here, that owners report doing significantly less “training and play activities” with small dogs.

As I read the results, I find myself thinking of Tootise, and how I treat her compared to all the other dogs I’ve had (all medium to large dogs). And there is indeed a difference. When Tootsie first came I obsessively worked on 1) a response to her name, 2) coming when called and 3) house training. She’s done absolutely beautifully on all three, and focusing on them means she can go outside in the yard without a leash (although I watch her obsessively), comes running when called, ears flapping, and is as reliably house trained as any dog could possibly be. She’s also stopped barking for her dinner and to get me up in the morning (food prep now results in tiny, mouse-like squeaks), but we still are working on barking while being restricted in space when I’m in the house (rather than having a small, food-crazed bundle of fur dancing on the equipment while doing Willie’s exercises, for example). And now she has a stunning heel on the way to the barn and back, taught specifically to ensure that she’d stay by me and not run off toward the road. She can do it for short periods during off-the-farm walks, but I’d never trust it off leash around distractions. But still, damn she looks good trotting enthusiastically, head and tail up as go to the barn twice a day to feed the sheep.

However, here’s what I haven’t done: taught her to sit, down and stay. REALLY? If you’re surprised, (shocked?) you’re not as surprised as I am. If she was a BC or a Great Pyr, (or a Lab or an Aussie or a Wheaton or a…. fill in the blank) I guarantee you we’d have started that on day one.  It’s true that I have worked on sit a bit, and she is gradually getting the idea (although much slower than any other dog I’ve had.. she is 7 year old mill dog after all), but the fact is there just seem to be more important issues. And that is, no doubt, in part because of her size. She’s tiny, really truly small, and there’s just no way around the fact that her dancing, leaping and charging around the house just doesn’t feel as problematic as it would with a larger dog. And yet, she clearly needs to work on what I call “emotional control,” so now that she’s settling in, I do indeed think it’s time to start focusing on some cues that require her to inhibit herself a bit.

Here’s the connection between Tootsie and the research: Perhaps smaller dogs are indeed more excitable, and not just perceived as such, because, in part, they are not as often taught behaviors that lead to emotional control. Willie, along with all my BCs, was taught to sit, down and stay early on in their training, all behaviors that teach dogs to inhibit impulsiveness and control their own emotions. Tootsie, if anything, is encouraged to run crazily around the house with her ears flapping because 1) when she came she was a bit shut down, and 2) in all honesty, she’s so damn cute when she does so. Encourage Willie to run around the living crazily? Eeeps, not necessary. More than that,  hyping up is the last thing he needs… Willie does best if you spend your energy calming him down, not hyping him up.

And so I’m interested in your experience: If you’ve had both small and medium size or large dogs, do you find that you treat them differently? Expect different things out of them? All this relates nicely to the last post, about how our expectations and unconscious cues effect our dog’s behavior.  What is the interaction between our expectations, training and the behavior of small dogs? (I suppose we should define “small.” That’s an interesting question unto itself. How small does a dog have to be for you to call it “small?” I’d say less than 20 pounds? Or so? Tootsie is about 14….).

MEANWHILE, back on the farm. As Facebook readers know, the week had a tough beginning. On Monday evening, just back from Arizona, I found my favorite ewe, Dorothy, down and unable to get up in the mud in front of the barn door. I spent the evening trying to save her, but even with an emergency farm call from the vet it wasn’t possible. She was ancient, 13 years old (the equivalent of being in her 90s if she was human), frail and thin, and probably had pneumonia.  Sheep with pneumonia often show no signs of it at all, no coughing or respiratory distress, and Jim said Dorothy was eating at the feeder Monday morning. She must have gone down very fast. I’m just thankful she didn’t suffer any longer than she did. She was a long legged, elegant and gentle ewe who produced 22 beautiful lambs for me, and I will miss her.

Here she is last spring, she’s the grey beauty on the right, with her 2 lambs to the right of her. Rosebud is to her left, with her triplets. I’ve kept the 2 pintos from Rosebud (or piebald ones) and they look like they will have their own lambs this year. 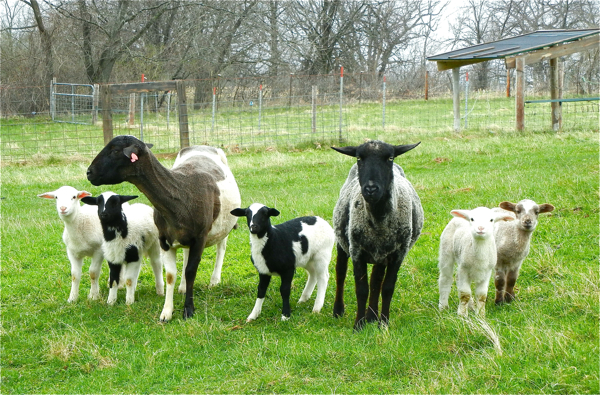 And here’s part of the flock now, looking at Willie on the other side of the fence in the background. That’s Rosebud closest to Willie in the back, with her lambs Oreo and Butterfinger to her right (one feeding, one also looking at Willie.) Spot, Rosebud’s daughter from 4 years ago, is the tan, wooly sheep in the back. You can see 9 year old Barbie’s wool while she chows down at the feeder, and just barely make out the muzzle of Lady Godiva on the far left. Without Dorothy it’s the smallest flock I’ve had in years, just six ewes, with King Charles the ram living at his co-owner’s farm. Lambing is set to begin at the end of March, lambing prep will be job one at the farm when I get back from the Tucson Book Festival on Monday. If you’re coming this weekend, please come up and say hi. (And notice the hill behind the pen in the photo? Anyone want some firewood? Geesh, we’ve had a ton of downed trees in the last year; one actually landed on the fence, but is only partially cleared. The chain saw will be a humming soon.) 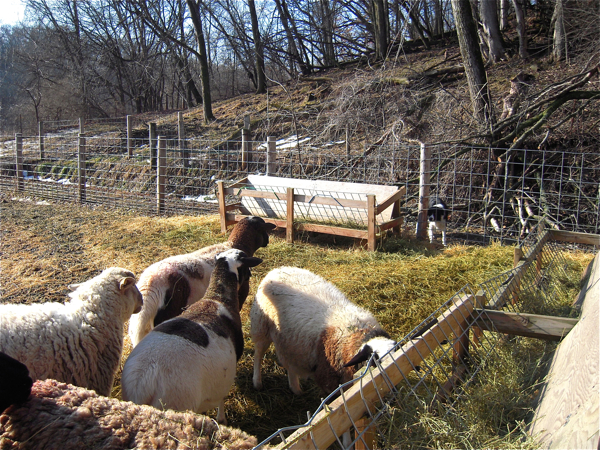