Welcome to an ongoing inquiry about the behavior of people and dogs.
Blog Home >> Animals and the People Who Love Them >> Sleep Disturbance Case – Urgent 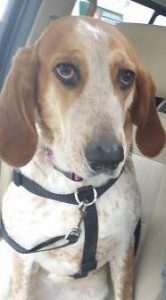 I’m busy on book tour, but was asked about this case at the Ohio Vet Conference late last week. You can read the description below, but the bottom line is this sweet, dear hound mix, Kasey, was rescued from a research lab but needs rescuing again. We didn’t have much time to talk about the case at the conference, but I was so touched by the story I suggested that we put it out to the village.

The bottom line is that Kasey is predictably fearful of many things, but the urgent problem is an inability to sleep through the night, and barking when she wakes up. This is making it extremely difficult to find a forever home for her, people being strangely attracted to being able to sleep more than a few hours a night. (I went through a period of Willie waking up every hour, or even less, for a while, and I was a basket case after 3 weeks. More on that below.)

I don’t have time myself to add too much myself, but I do add a few comments at the end. If you have any experience with this issue, please add your thoughts.

Here is from Heather, the guardian angel who is moving heaven and earth to help Kasey. I edited out some of the history, trying to keep in what was critical but not bury the lead. Don’t hesitate to ask questions in your comments!

Kacey (FS Hound Mix 3yo 70#) came into rescue from a research lab (kennel).  She is very people friendly, and likes handling/ attention – she warms up quickly to strangers visiting the home and is good with other dogs. She is un-socialized to home environments and outdoor spaces.  She is very uncomfortable in the car and has to be lifted in.  She is unsure about how to appropriately interact with novel items – and has done some inappropriate chewing of soft/fabric items around the house.  Outside, Kacey quickly hunkers and backs up if she is unsure on leash.  Noises, or feeling uncomfortable outside trigger her wanting to go back inside.

The owner had contacted me about some sleep disturbance issues as she moved back to sleeping upstairs.  (Kacey was not house trained, and was trained to sleep in a pen in the living room at night.) Kacey would wake up and bark off and on through the night, and it was getting worse.  At night Kacey was ok at bedtime when the husband stays with her while the wife goes to bed – she is quiet when he goes up.  When asked about possible separation anxiety, the only reaction is when the wife leaves, Kacey would bark until she hears the garage close, then she stops and goes to sleep.

We tried giving Kasey Melatonin prior to bed, and the owner reported that was successful for a period of time. We went over enrichment strategies, and I suggested boosting opportunities to chew and mental enrichment in order to help further settle Kacey at night.  I said if sleeping was a problem getting to the vet was a priority.  It is notable that Kacey greets then happily naps until we are ready to work with her on my visits – the owner said her behavior at our meetings is typical.  She doesn’t present as under-enriched.

[[From Patricia: I also asked if the other household dog slept in the same room, given the dog’s past in a laboratory, presumably with other dogs, and it seems it doesn’t matter if the dog is present or not. Or whether people are in the same room or not.)

There had not been any accidents, and Kacey was sleeping well on 9mg of melatonin.  She was able to walk all the way from the front door to the end of the driveway.  She has been building curiosity about seeing other people and dogs outside.  There has only been one instance of inappropriate chewing, and she was accidentally left out the prior day and did not destroy anything or have an accident.  We worked on DS/CC for the things that scare her on walks, and work on building to getting in the car.

Sleep has been deteriorating since just after the last meeting, and the owner had to take her to the vet and they told her to give Benadryl.  They did not do an exam, or blood work.  There was no change in behavior after a few days, and the vet prescribed Trazodone (100mg).  She was worse overnight, and the owner, panicked about Kacey’s quality of life, and sleep deprived, said she wanted to return her.  I arranged for her to be boarded with a behavior friendly vet.  They kept her for 3 nights to give the owner a break, do medical rule outs (blood work/urinalysis – both clear) and try to get medication on board to help with sleep.  They increased trazodone to 300mg 2x a day and added Gabapentin (1200mg).  Video showed her sleeping overnight after the medication, and the owner was able to pick her up to try again.

They gave the same medication overnight and Kacey woke up barking 3 times throughout the night. We ruled out noises waking her, tried leaving a light on, and added music, which didn’t help.  We adjusted to the trazodone (200mg) in the morning and gabapentin combined with acepromazine (30mg) overnight.  She woke up on this combination after 4 hours the first night.  Over the next few nights she continued to break through more until she was up fighting the medication at night, and barely sleeping.

At the moment, Kasey is back at the vet clinic, where she appears to be sleeping five or six hours before waking up and barking.

Here are some quick thoughts from me: I at first thought perhaps it was the environment at the clinic that allowed her to sleep, but Heather tells me she was just as bad at the clinic until she was given medication. I do find myself wondering about the environment and its effect–what type of crate is she in? Substrate? (I remember talking to greyhound rescue volunteers who said that the exact same crate was essential when they first pulled the greyhounds.) What about the sound scape?  Could one go back to the vet clinic and see if one could replicate at least part of it? I find myself thinking a lot about “antecedent” in the ABC chain of behavior analysis.. what’s the antecedent to waking up? Is the answer in the difference between what’s at the clinic and what’s at home?

I also risk being criticized by some for mentioning an opinion about medications (not being a vet), but I do know from my PhD research that Ace causes animals to become immobile, but does not ameliorate anxiety. It can actually make it worse. I defer to my veterinary behaviorist colleagues about trazodone and gaba, Surely there’s a veterinary behaviorist who could do a phone consult asap since this is an urgent case? If one isn’t reading this, I’ll reach out to colleagues. I myself hope that a well-trained alternative medicine veterinarian can see Kasey asap.

Here’s what Heather added this morning: She has been back at the vet 2 nights and slept 5 to 6 hours with another adjustment of meds.  I have noticed that she seems to do better the first night or two, then seems to fight the meds and return to the behavior.  Myself and the behavior person at the vet have been back and forth about sound… it seems like a likely antecedent, but the owner wasn’t able to ID anything.  She definitely barks at noises at the vet.  Outside she hunkers and will try to get back inside if scared of a sound (like a plane in the sky, or a truck).  Substrate is super important for her – she is concerned about slick floors (which is the case at the vet – they give her a blanket in her kennel or she is uncomfortable – she also likes HER blanket, not a replacement when the one she initially had needs to be cleaned).  She is concerned about tight spaces too – initially they had her in an isolation kennel which was where she could be closer to the people, but the way the doors opened created a tight space WITH slick floors.  I had to go in and actually help get her out – we put her into the regular boarding kennels and she was fine (so that is where she is now).  I found myself wondering if she might be having auditory hallucinations this morning, or bad dreams.  The way she was waking up hourly, almost exactly once an hour struck me as off for that though.  I think actual sounds are more likely.

Another thought from me: I have already mentioned that Willie went through a period of waking up constantly during the night, and after extensive tests for a medical problem with no findings of any problem, I put him on melatonin. It worked for a while, then it didn’t, then it did again. (I did increase the dose, but I also did acupuncture and Chinese herbal medicine.) Note that melatonin seemed to help Kasey for a while, but no longer. [Heather notes the vet is concerned about adding melatonin to the medication mix; an understandable concern for sure.]

Village? Can you add some wisdom? I am slammed with book tour, but have so much respect for the collective wisdom of you all out there. . . Kasey is out there, needing our help. 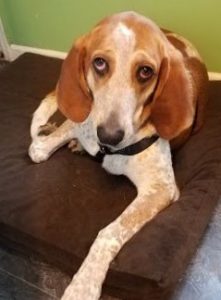