Welcome to an ongoing inquiry about the behavior of people and dogs.
Blog Home >> Animals and the People Who Love Them >> Small Dogs, Big Dogs. Love Both? Or Not?

I was going to title this Size Matters? But then, well . . . you know. But today’s question IS about size, and whether a dog’s size influences your interest or attraction to it.

Full disclosure: I grew up in a dog-loving family that gravitated toward medium to large-size dogs. Comments were made by my parents and friends about small dogs that weren’t particularly positive. “Yappy,” my father called them. According to one relative, “Rug rats” weren’t even “real” dogs, that distinction being reserved for Labradors and German shepherds. 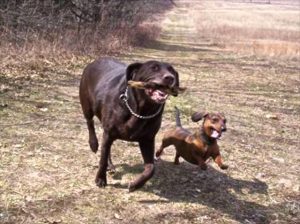 Then, early in my career, I began volunteering at dog training classes, and eventually began my own training and behavior consulting business. And lo and behold, I discovered that the smartest dog in one class was the Miniature poodle, and that the Cairn Terrier in another class stole my heart every week. In other words, like a lot of prejudices, mine melted away as soon as I discovered the reality of “the other,” and dropped the beliefs that had been inculcated in me at an early age.

I personally like living with a mix of sizes, (Willie is 45 lbs, Maggie 35, Tootsie about 12) but most important to me is a dog’s physical and psychological health, regardless of size. However, understandably in many ways, size matters greatly to the dog loving public, and recently there’s been talk about a perceived trend that people are getting small dogs more than ever before. My web techie prince, David, said he’d heard that, on average, dogs weighed 17% less than “before.” I’ve tried to find the source for that, but failed so far (anyone?).

In the process of searching, I did find some interesting information: For example, authors Teng, McGreevy, Toribio & Dhand, reporting in Canine Genetics & Epidemiology, 2016, found that in Australia. . .

In other words, ANKC registered dogs got not just smaller and shorter, but their heads are also more puppy-like. (Note however, that these statistics come from kennel club registrations, which, of course, is not the same as “all dogs in  Australia.”)

What about dogs in the U.S.? It is equally difficult to look at “all dogs in the U.S.,” but we can start by looking at AKC registrations. Thanks to Stephanie Smith at the AKC (much appreciated!), we can compare rankings of small dogs from 2005 to 2015.  When we do, it seems that many small dogs are actually less popular than ten years ago. Yorkies, Havenese, Chihuahuas, Maltese, Pugs, Papillons, Min Pins, Italian Greyhounds, Pekingese, Toy Fox Terriers, to name a few, have all had fewer number of dogs registered dogs registered over the last ten years.

Looking at registrations from a longer time span is especially interesting. Look at this article that compares AKC registrations from 1935 to 2015. Cockers, beagles and small poodles ruled the roost from 1936 to 1990, when Labradors, goldens and  German shepherds took over as the breed with the most registered puppies. You can see the trend for larger dogs begins in the 60’s, when GSD’s move into the top 3, and in the 80’s, when retrievers start increasing in popularity.

However, these figures are from AKC registrations, and don’t necessarily reflect the ancestry of all puppies being produced in any country at any one point in time. Obviously a large number of dogs are mixes of several breeds–some purpose bred “designer dogs” like Goldendoodles and Cock-a-Poos–some unplanned or unplanned matings between dogs of unknown origin. But, obviously, there’s no information on these dogs, and so all we can do is guess. 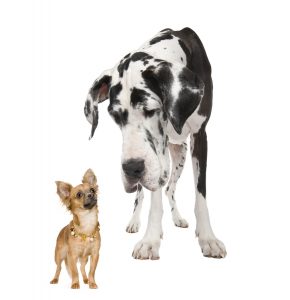 This leads to two questions for you to ponder: One, if you work in a shelter setting, what trends are you seeing? Over what time span? It appears to me that size preferences vary in different regions of the country. Shelters in Southern California, I am told, are full of small to tiny-sized dogs, while a walk through of Midwestern shelters reveals mostly 30–60 lb dogs. How much of that is because small dogs are adopted so fast, while larger dogs stay in shelters longer is another question altogether.

Second, what about your personal preference? Do you have one? If so, has it changed over time? I’d love to hear what you have to say. If you’re interested in an analysis of what drives breed (and size?) preferences  over time, see Dr. Hal Herzog’s interesting article in the Royal Society of Biology Letters that suggests that “cultural drift” (or, what kind of dogs one’s friends and neighbors have), along with media attention, is more important than information about health and behavior in creating a breed’s popularity.

MEANWHILE, back on the farm. We spent the weekend outside of Hudson, WI at the WWSDA Labor Day Sheepdog Trial. The trial went like clockwork–beautifully organized, lots of great volunteers–along with a gorgeous course and sheep ready to challenge the dogs at every turn. Regretably, Maggie wasn’t up to the challenge on her second run, and the sheep beat her back to the set out pen. I’m the one who messed up on her first run, which was messy but credible. But I didn’t flank her far enough around the flock after her lovely outrun, and set her up to have to fight the sheep on the rest of the course. Argh. I don’t mind my dog messing up, but I felt like I let my dog down and it’s bothered me ever since. I suspect that anyone who competes with a dog can relate. I keep looking at Maggie, however, and reminding myself that she is not fussing about such things, and I should do the same. Ah, the wisdom of dogs.

Besides enjoying all the rest of the trial, including the gorgeous weather and great company, there was a silver lining to Maggie’s losing control of the sheep on her second run. After Maggie and the sheep disappeared over the hill to the “set out pen,” I hoofed it about 400 yards to get her, hoping that I could help her pick up the sheep and bring them down the course. Turns out they had already been penned up with the others (time being important between runs, very understandable), but at least I, first of all, got in some good exercise and second,  got to hear a much younger handler say “Man, you are in great shape! I can’t believe how fast you walked up that steep hill!” Thank you, AJ. You gotta take the good where you can get it.

Here’s a look at the scope of the course. The handler and dog in the foreground are attempting the “shed,” in which the two of them have to split two sheep off the group, and the dog has to prove to the judge that he can keep those sheep away from the others, having taken complete control.  Look closely though in the background, and you can see the next group of sheep being moved into place for the next team. 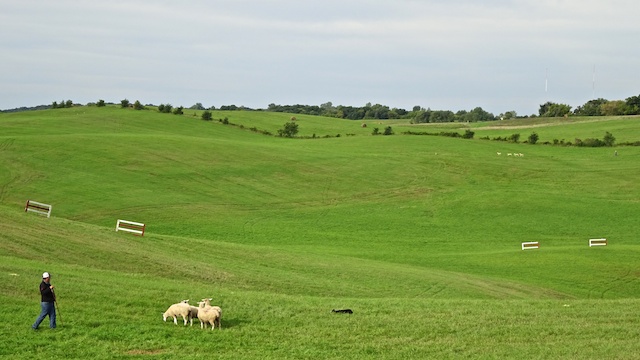 Here’s part of the course from the backside. (I helped get sheep out of the set out pen for each run, a great way to watch the dogs “lift” the sheep, and admire the great work of set out artist Wendy and her amazing dog Greta.) You can just barely see the handler in the back left foreground, just to the right of the tree–the tiny white dot in front of the truck where the judge was perched. The food tent and spectators are lined up on the top right. Yeah, it really is a huge course! I was proud of Maggie for doing lovely outruns (she needed a redirect on her first one when she ran into a dip and lost sight of the sheep, but she took it perfectly). I’d tell her again that I’m proud of much of what she did, but she’s sound asleep on the couch. 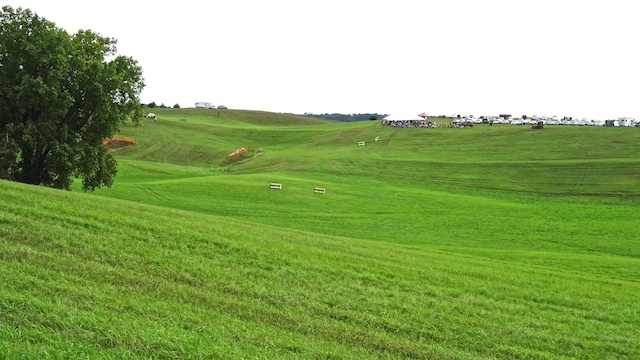