Welcome to an ongoing inquiry about the behavior of people and dogs.
Blog Home >> Dog Behavior >> Spring Frost & Big Bellies

Next week I’ll start writing about social hierarchies, the “D’ word and dog training. Eeee Hah!  But for now, it’s Friday, I get a weekend without 4 hours a day of grading papers or doing grant reviews for the first time in a month. Ooooooooooh, there’ll be lots of gardening and cleaning of house and playing with critters and eating and exercising and cleaning up the house and watching of golf (yep, no kidding).

Some sad news: Something happened a few nights ago that scared Willie so much that he won’t sleep in the bedroom anymore. He goes upstairs with me, and as soon as we both enter the room he begins to tongue flick and flatten his ears. He then slinks out of the room as if it contained monsters. He sleeps in the adjoining bathroom, and slips back into the bedroom sometime during the night. It seems to have something to do with me, but only me in that room in that context. Before we go upstairs we usually spend at least an hour lying together on the living room floor while I watch television. We cuddle and I rub his belly and he licks my face, and we have a mammalian love cuddle fest and then we go upstairs and he acts like I’m a werewolf. Here’s my guess: either something fell off of the bed (which I tend to pile with books and magazine, or I had a nightmare and made some kind of racket. He is so easily frightened that I can imagine either one being the cause. Poor Will, he is such a bundle of anxiety sometimes. And poor me, because it feels lousy, like I’ve become an abusive dog owner. I know intellectually that it has nothing to do with anything I’ve consciously done, but still . . . He seemed a little better last night, so hopefully this will resolve itself soon. I’m going to try some counter classical conditioning to see if I can speed things along.

Back in the barn, four more ewes are still due, and I admit to getting a tad impatient. However, I’m not the one carrying around 2 or 3 lambs the size of adult dogs inside my belly, so I have little to complain about. This weekend I’ll put the 9 lambs we have already out on grass for the first time. Can’t wait, the lambs of my new ram seem to be especially playful and spring loaded. I’ll try to get pictures. . .

Meanwhile, last night we had a hard, hard freeze. You can see the frost on the daffodils here. They should be fine, they are super hardy, but I am a bit concerned about some of the buds on the trees. Our atypically warm weather pushed a lot of plants too hard and too fast, and the buds of things like lilacs and apple trees aren’t as hardy as the buds. All paws crossed. . . 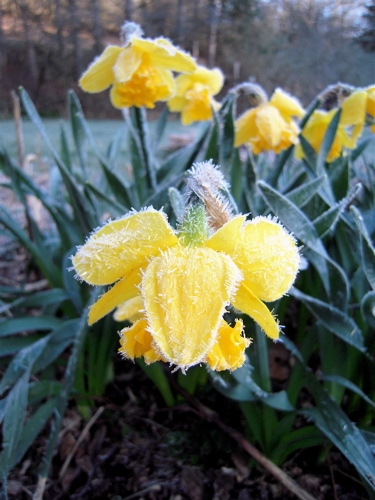 Here’s a dog-sized view of Barbie’s belly–taken two weeks ago. Now we call her the EXPLODO EWE… stay tuned. 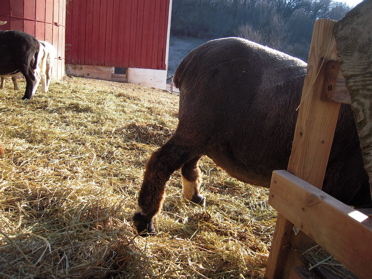 « Dogs & “Dominance” –What’s a Person to Do?
Unexplained Fears & Lambs Coming Out of Our Ears »