Welcome to an ongoing inquiry about the behavior of people and dogs.
Blog Home >> Dog Training >> Starting from the Beginning

I’m just back from participating in grant reviews for NIH (Nat’l Institute of Health), and what a process it was. 36 people, from all over the country and a vast range of fields, were charged with reviewing a large number of grant proposals for scientific merit. The proposals were administered through the Nat’l Institute of Child Health and Development and related to Human/Animal Interactions. I can’t tell you anymore about the grants themselves, or they’ll shoot out my kneecaps. Well, probably not, but the absolute hardest part of the process is that we all pledged to keep virtually any information about the proposals themselves completely confidential.  That means never, ever talking about them to anyone, ever, outside of our two days of meetings in Washington, D.C. As the Scientific Review Officer said: “The statute of limitations is forever.” She said it would be the hardest part of the process, and it is. I’d say more, but then I’d start going down a slippery slope.

What I can tell you is this: First, the initial phase of the process is something like sitting on a beach in the warm sand, and then looking up to see a wave about 30 feet high looming toward you. Once you agree to be a reviewer, the amount of information that one is sent is, well, overwhelming. The process is clearly much less time consuming once you’ve done it before , and considerably less confusing, but as a newbie, wading through the reams of information sent through the mail, email and internet is daunting. It took me I don’t know how long just to figure out what COI (conflict of interest) and SRO (Sr. Review Officer) meant. Well, I do know how long it took, but I’d rather not say.

In brief, 3 people are charged with carefully reviewing about 6 grant proposals each. Once that is done (8 million hours later-although the process is actually clear and straight forward once you’ve got in figured out, some of the grants are over 200 pages long), the entire panel of 36 people meets for 2 days to discuss and eventually rate every proposal that the reviewers agree has merit. We met from 9 am to 6:30 pm on the first day (1/2 hr for lunch, in the room) and started at 8 am the 2nd day. We finished around 1:30 pm, which was a boon to those of us who wanted to fly home that day. I managed to book an earlier flight, and got home at 9:30 instead of midnight. What’s most important to know, if you are a tax payer, is that the process was done with meticulous attention to giving every proposal a fair and equitable hearing, that the room full of reviewers (from child psychiatrists to CAABs like me) had enough IQ to lift the building off of its foundation and that everyone worked hard and appeared to care deeply about the process.

Before I left I must have said “I WILL NEVER DO THIS AGAIN” at least 25 times and after I came back I said “Wow, that was amazing.”

But the primary reason I bring it up here is because the review process reminded me of a ‘simple’ but not easy aspect of dog training: starting from the beginning. Let me explain: The SRO (see, now you know the lingo too!) asked us to let her know if they could do anything to make the process simpler and easier for first time reviewers. I will write her next week, because there is. What I most needed was someone to give me chronological instructions. “First, do A. You do A this way. Then, do B. The way you do B is this….”. It seems so simple, but it’s actually very difficult to pull off instructions that are that clear IF you are involved in a complicated process and IF it’s hard to remember what it is like to start from the beginning.

I think learning to train a dog has the exact same challenge. So many trainers are so good at what they do that they can’t remember what it was like when they first started. There are great dog trainers who are brilliant at training dogs, and there are great teachers who are great at training people to train dogs. Sometimes that gets combined, but they are two different skills, don’t you think?  Great dog training teachers are able to both empathize with dogs (as best one can with another species) and also with the beginners that they are working with. I am still touched and saddened by how many people have come to my office in the last 22 years and said “I left dog training class/another behaviorist/the vet’s office in tears…”. I think it happens less than it used to, but it still happens too much. One feels so vulnerable when starting something out, and unless information is provided in a way that begins at the beginning, it is hard to learn much.

But it’s tough to start at the beginning when you were there many, many  years ago, isn’t it? It’s challenging, but it’s actually one of my favorite parts of my work–working with people who don’t even know where to start. In part, it requires a clear understanding of where the beginning really is, which is not always an easy place to spot when you’ve traveled far away from it yourself. So here’s the question of the day: What is the beginning? What are the very first things that people need to know about training and behavior when they first get a dog?

Here’s one of mine, just to prime the pump: Dogs can learn to respond to dozens or hundreds of words, but first, they are watching you. Learn to pay attention to how  your body moves when ‘talking’ to your dog, and you will automatically beocme a much better trainer.

Meanwhile, back on the farm: Before the farm, here’s a shot taken close to my hotel in Washington, DC. Trees in bloom, OH MY! 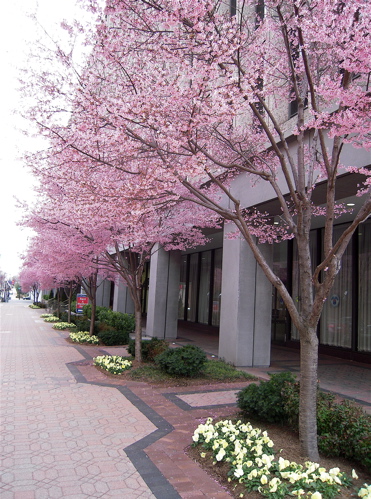 And here are some of the girls (and Redford in the middle) at the feeder, with careful attention paid to their nether regions. Butt checks like this happen three times a day now. I have 3 ewes who were/are due to lamb between yesterday and tomorrow, and I am obsessively looking for signs of imminent action. The one who looks closest here is Spot, 2nd from the right, with her slightly enlarged bag and swollen vulva. And of course, there’s piggy Brittany standing in the feeder getting everyone covered in hay, as usual… 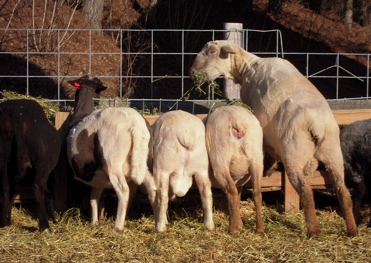 But nothing yet. Jim, Will and I are about to go on a long walk (it’s sunny and gorgeous) and I’ll check again when we get back.  Will is still on leash, but I let him run free to the barn and back yesterday (he is crazed with joy to be outside off leash or off heel, I got tears in my eyes watching him flip and spin joyously). I’m still taking it slow, we’ll keep him on leash for the long walk, but I’m becoming a bit optimistic that he might be able to go back to working sheep or playing with other dogs in a week or so.

« How Much is Enough?
The Concept Formerly Described as “Dominance” »