Welcome to an ongoing inquiry about the behavior of people and dogs.
Blog Home >> Animals >> Summer Books: What are You Reading?

Question: Is there ever enough time to read? Answer: No. I read every night and every morning at a minimum, and if I ever had a genie rise out of a bottle and ask me for one wish, I’d ask for another hour or two of reading time in every day. (And long, pretty legs instead of stumpy ones. And world peace.)

Here are some of the books I’ve been savoring, in hopes of beginning a conversation about other great books just waiting for me to turn the page:

The Possibility Dogs. I wrote about it last week, but couldn’t skip mentioning it again. Here’s the quote I sent to the publisher after reading the review copy: “What an amazing book. Combine love, knowledge and real-life drama with pitch-perfect writing, and you’ll end up with The Possibility Dogs. Simply brilliant!” I like it so much we’re selling it on our website.

What the Dog Knows by Cat Warren. I’ll have to start by asking for your forgiveness, because the book won’t be out until next October (but you can pre-order it). I mention it now because it is so closely related to Susannah Charleson’s Scent of the Missing, in that it is about dogs using their noses (in this case Cat trains Solo, a singleton pup German Shepherd Dog, to become a “cadaver” dog.) Cat is an Associate Professor in English and the writing shows it; it’s the kind of writing that either inspires you or makes you want to throw your hands up and stop writing yourself altogether. It is a fantastic book, combining CSI-like details about the science of finding the remains of deceased people, Cat’s experiences learning to become a handler, and her abiding love (and occasional humorously described frustration) with her amazing dog, Solo. I think that this book is one of the greats, so don’t worry, I’ll write about it again in October when it is released.

Cooked by Michael Pollen. Those of you who know me know that I love food almost as much as I love dogs or Jim, so of course I had to buy Cooked as soon as it came out. The subtitle, A Natural History of Transformation, is an important guide to the book’s content. Not a cookbook, not a discussion about what we eat or where it comes from (as in his other books like The Omnivore’s Dilemma or In Defense of Food), Cooked is about the miraculous transformation that occurs when the skilled use of four classical elements–fire, water, air and earth–change, for example, a simple mix of flour and water into a crusty, air-filled loaf of bread. After reading it, I am inspired to make my own sourdough starter (I make bread a lot, but I use commercial yeast and flour), I appreciate BBQ like never before (that’s saying a lot) and am inspired to make even more slow-cooked stews and pot roasts. As usual, Pollen’s writing is informative, interesting and funny. I laughed out loud so often that Willie began glaring at me when I picked up the book.

Gulp by Mary Roach. Food goes in, food goes out. I didn’t plan to read these books in concert, it just seemed to happen that way. While Cooked is all about the preparation of food, Gulp explains what happens to it once you put it in your mouth. Not for the faint of heart or the squeamish, Roach doesn’t hesitate to get down and dirty about what goes on inside your body after dinner. Subtitled “Adventures on the Alimentary Canal,” Gulp is ridiculously funny (The Washington Post calls her “America’s funniest science writer”) and endlessly fascinating (Elvis probably died of constipation–seriously). However, even I, the woman who attracted a circle of stunned Masai warriors when I squatted down in glee to discover dung beetles in cow poop, had to take a break for awhile once the food traveled into the gut. There’s just so much I can read about poop, so I began to read the end in small doses. Still, I heartily enjoyed it. Mary Roach also wrote Stiff: The Curious Lives of Human Cadavers, which I loved, and Bonk: The Curious Coupling of  Science and Sex. (How have I missed out on reading that? Anyone read it?)

Daring Greatly by Brené Brown. This is a book I want to buy for every single person I have ever cared about. I think it’s brilliant. And amazing. And important. You may have heard about Brown’s TED talk about vulnerability, and the importance of embracing honesty, humility and vulnerability as a strength rather than a weakness. Brown is a PhD, LMSW (social work) professor and writer who has spent her academic life studying vulnerability, courage, and shame. Yes, shame, that emotion that no one wants to think about but is the cornerstone of so much of our suffering. She has a blog that is a wonderful source of inspiration (and other great books). Daring Greatly is an important antidote to a world in which people are lightening quick to criticize anyone who doesn’t fit their standards of perfection, and in which snap judgements are encouraged by social media. And if I may, I might suggest that it is just as relevant in the world of dog training as in any other. Dog trainers and dog lovers can be terribly hard on one another, and I think there’s little profit in that. After I finished this book I started on one of her earlier ones, The Gifts of Imperfection. I’d love to hear if you’ve read her work already (or seen her Ted Talk) and what you thought.

With Me or Without Me by Domenica Ruta. The list of memoirs written by women raised by crazy, abusive, or just downright difficult mothers grows and grows, but this book stands out to me above many of the others. Ruta, a writer with an MFA from the Michener Center for Writers at the University of Texas at Austin, has written a book that is unflinchingly honest and relentlessly engaging. I finished it in two sessions, cursing her at one point for robbing me of a good night’s sleep. Here is one of my favorite quotes about the book: “Freakishly brilliant, brilliantly freakish, this is one of the best memoirs I have ever read” (Gary Shteyngart) and “…hums with jangled energy and bristles with sharp edges.” (Slate) A word of caution however: Ruta does not hold back about her behavior. If you are easily shocked or offended, you might want to pass it up. (And of course, now some of you are especially interested in it, right? Smile.)

Also, I’ve recently read Mary Karr’s The Liar’s Club (1995, another memoir about growing up with, or in spite of, parents who did not read the book on raising children) and The House of Tyneford by Natasha Solomons (historical fiction, 2011). Both excellent.

MEANWHILE, back on the farm: Summer is well along and the lambs are growing well. We are almost done with bottle feeding, all five bottle babies being over eight weeks old, ruminating and able to turn grass into usable energy. That will give me over an hour a day back, what a gift! We are learning as we go about the ins and outs of a strictly followed controlled grazing regimen, and the learning curve is steep but interesting. If the area we create with electric fence is too large, the sheep still pick and choose what they like best and trample the rest. Sort of like picking out the chocolates from a chocolate chip cookie by throwing away the cookie part. If the area is just right, they eat everything in sight, exactly as we want, but areas that small will only last one or two days and so have to be created several times a week. However, we’ve learned that if the grass is too high, a “right size” area doesn’t work, because they won’t eat the flower or seed stalks, and end up trampling those long stems onto whatever was good food for them. Either way, it is a great deal of work for us, mowing lanes to set the electric fence (it’ll short out if just a few blades of grades rest against one of the wires), setting up the fence, and then moving the sheep back and forth one to two times a day. Willie thought it was great until he injured his hip and went on a “crate rest” regimen. (More on that below.) My reaction is mixed: I like that huffing up our steep hill 2 to 4 times a day means that I can eat a chocolate chip cookie every once in a while without worrying I’ll have to buy new jeans (Okay 2 cookies. Maybe 3. I’m just saying.) Jim is absolutely stalwart about mowing and setting the fence, and has yet to complain about the frequency of it. The sheep don’t like it at all. Sometimes I’ll put them in an area with the equivalent of porridge, and they’ll stand there bawling at me in protest. The “baa’s” of protesting sheep are unmistakable, and truly amusing. (Unless you are tired, and Buttercup, the loudest whiner of the group, won’t stop yelling in your ear while you’re cleaning out the barn. “NO-O-O-O-O,” she’ll say. “I want more Foo-oo-oo-ooo-ood!” The words, “Buttercup, shut up,” have passed my lips on occasion.)

The bad news: Willie’s strained his Iliopsoas muscle. Sigh. He got up last week and held his left hind up for at least 12-15 strides, then put it down but limped badly. The good news is that it is a mild strain, and recovery is expected within four to six weeks.  I’m grateful that it’s not worse, and predictably bummed that it has happened at all. I think he is dealing with it far better than I, but I am working on acceptance and deep breathing and being grateful for all we have. I’ve pulled him from the two trials we had entered and canceled our herding lesson in July. We’re doing special exercises two times a day, he’s on lots of supplements and had acupuncture yesterday, so hopefully this will be behind us soon. Cross your paws. (A related note: I continue to check to be sure I’m not spelling “Iliopsoas” incorrectly. A veterinarian friend of mine said it was her favorite muscle because it sounds like a dinosaur. I agree, and I’m grateful to her, because now every time I say “Iliopsoas” I smile.)

Oh well, more time for me to garden, right? This spring we’ve had lots of water, about 4-6 inches over usual, a far cry from last year’s drought. We’re all getting a little nervous about getting in a hay crop (it being especially hard to get last year), but it is lovely to see the plants get “fed” so well this spring and early summer. Here’s an Iris, a flower I find lovely and ridiculous at the same time: 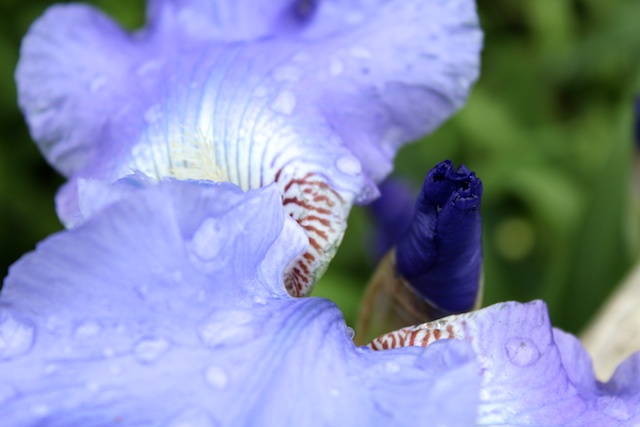 And the detail of a Tree Peony flower. The colors are so bright it looks fake, but this truly is exactly the colors the camera recorded. Honest, I promise. Wow. 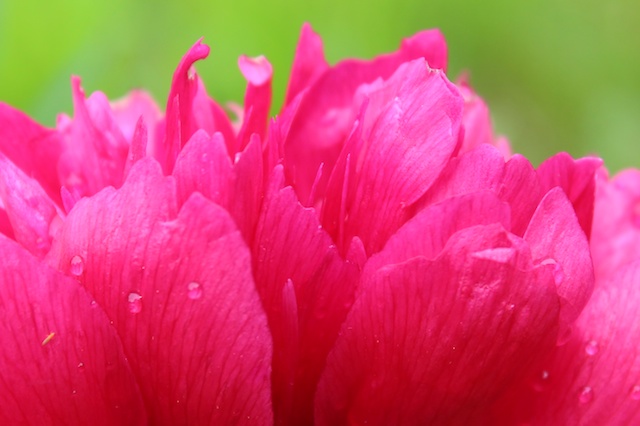