Welcome to an ongoing inquiry about the behavior of people and dogs.
Blog Home >> Border Collies >> Summer Fun, from Frogs to Sheepdogs

It’s a light post today, in celebration of the waning days of summer and a bucket of writing to do for speeches (both on “People, Dogs & Trauma,”one a Keynote at ADI Trainer’s Conference in Denver, the other a Keynote at APDT in Hartford, CT), revising a chapter with Aubrey Fine in the Handbook on Animal Assisted Therapy, and working on my memoir.)

Every day I ask myself what I am grateful for, and today I’m thanking the universe for this little green frog who is an Eastern Grey Tree Frog. (Apparently you can order them in a variety of colors. This one arrived in green.) 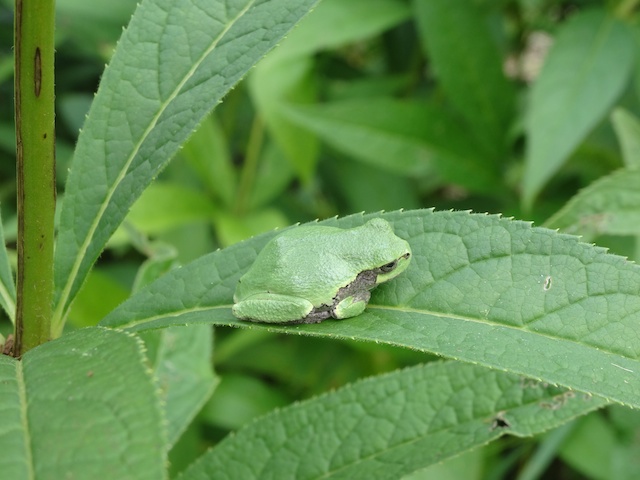 There is no scale in the photo, but he is tiny, perhaps an inch and a half max. I never would have noticed him if I hadn’t been on my daily round of picking Japanese Beetles off of my plants and dunking them in soapy water. The beetles are voracious, have few predators, and can consume your favorite plants like a storm of locusts. You can either use pesticides that are horrifically damaging to a host of creatures in the environment, or do what I’ve been doing, picking them off the plants one by one and dropping them into soapy water.

As frustrated as I’ve been by the beetles, they opened my eyes to the tiny animal life on the farm that I never would have noticed. A bevy of several species of bees (so happy to see the bees!), butterflies galore (okay, I would have noticed them anyway), and a vast number of fascinating beetles, none of which has appeared in the army-like numbers of the Japanese beetle invasion.

Here, then, is my question for you today: What negative event in your life has had a silver lining? I suspect we can all think of many examples. The terminally cute little green frog I only noticed because of the Japanese beetles is a lighthearted one for me, Willie teaching me to accept who he is (who I am, who X is, you name it…) is a big one. You?

MEANWHILE, back on the farm: Willie is recovering well from his minor surgery. In a few days I’ll be able to get him back on sheep. I admit to feeling a tad obsessed with working sheep dogs at the moment, I’d work Willie and Maggie three times a day if I could. Right now I’m only working Maggie once or twice day, depending on my schedule, but she’s making real progress. I’ve started her on driving and I think she is going to like it. She puts that little head down and laser focuses the flock forward. Love it.

Here’s a video of Willie’s Pro-Novice run last week in Cambridge. There’s no sound recorded, and you can’t always see Willie on the screen, but as we are all told, “the sheep will tell you what your dog is doing.” Willie did very well on the fetch and driving section of the course, which was the part we’ve been working on the most. He had become less and less happy about driving, doing lots of hesitating and looking at me ever since his shoulder surgery and his three months on leash (again) after an iliopsoas tear last summer. I honestly think he was (is?) suffering a bit from “Stockholm syndrome”), after so many months of never being able to move without looking at me. So in training we worked on making driving fun… I let  him lope behind the sheep and push them forward, with no worry about precision signals to go left or right. I was very happy with his drive, more on that below.

However, as so often happens, the one thing he’s always been solid on, his outrun, fell apart. You’ll see that he leaves me and runs around clockwise for about 150 yards. (At 3 seconds you can see the sheep behind Willie, a long way away!). At about 14 seconds you can see that he circles in with the sheep behind him and looks at me. “Where are the sheep mom?” I gave him a “Look Back,” which is supposed to mean “the sheep are behind you, go back and get them.” He knows “Look Back” but apparently has added in his own spin on it: “Go get the sheep behind you, but change direction while doing it.” After he stops to look at me you can see he continues on in the same direction, and finds the sheep from the other direction that he was sent. He was sent clockwise to get the sheep, but then “crossed over” when he heard Look Back and changed direction to run right, or counter clockwise. (It is clear to me now that I should have stopped him sooner, my bad.) Basically, he ran a figure eight rather than a half circle. He did the same thing on the 2nd run–I sent him to the right thinking that’s how he found the sheep on the first run, but he again stopped short, and crossed over to the left when I said Look Back. A clear example of the difference between the “message” (sheep are behind you) and the “meaning” (get sheep by changing direction)! I can’t fault him for stopping short, the sheep were 300  yards away, which is a very, very long outrun for ProNovice, and Willie has never run that far. We have our work cut out for us on this, it’s not easy to find a field that big to work on that has sheep in it, but we’ll do our best before the next trial.

I tried to add titles in iMovie to “narrate” the video, but right now iMovie is not my friend, so I’ll just say a few things here for you to look out for: At the beginning you can see him run in a half circle but come in in front of the sheep and look at me. I say “Look Back” and that’s when he changed direction and went back to get them from the other side that he was sent from. “Crossing over” loses you 19 of 20 points on your outrun. Ouch. Willie and I have to have a discussion about scoring. Then watch how he brings the sheep directly to me through the first fetch panels (good!), wraps them around me tightly as I stand at the post (good!) and drives them straight through the 1st drive panels (good too). Then we make a good, tight turn toward the 2nd drive panels, but get a bit off line on the way there. Not too badly, but we did lose a few points. Then we penned, although really, these sheep pretty much walk into the pen themselves so we get no credit for that. But I was very happy with his fetch and driving on this run and felt like our work the last few weeks had paid off. I should say, though, that his next run later in the day wasn’t as good. Both he and I seemed a bit behind the eight ball. It was killer hot in the sun at that point, is that our excuse?

As soon as Willie is healed up (end of the week?) I’ll be taking him to a larger field and working on his outruns. Regrettably it’s not something that you can do over and over… 300 yard runs in the heat aren’t something I’d ask Willie to repeat too often, but hopefully he’ll be sound enough so that we can work on it.

I hope you are all able to do something fun with your dogs this week, too. As always, I’d love to hear about it…