Welcome to an ongoing inquiry about the behavior of people and dogs.
Blog Home >> Animals >> Tail Wags Translated

I love tail wags: they are such an interesting expression of internal affect and indicator of a dog’s emotional state. And I know the professional trainers who read this blog know how often they can be mis-interpreted by the general public. “But he was wagging his tail…!!!!” is a phrase heard painfully often, by people who have been bitten, or whose dog just snapped, nipped or bit.

Ah, but a tail wag is like a smile: often an indicator of happiness, but not always. For example, we all know what a “phoney” smile looks like. The lips part and the corners of the mouth rise but the eyes never change. I’m remembering one person who smiled at me in a way that caused me to think I was in danger.  There was nothing friendly about this guy’s face, because his eyes were cold and hard, and the muscles around his eyes, the orbicularis oculi muscles, were not contracted. Makes me shiver just to think about ti. In contrast, in a ‘real’ smile, (called a Duchenne smile) the muscles contract and the eyes look squinty and partially closed.

There’s an equivalent of a “phoney” smile in a dog’s tail wag. The more the wag spreads to the body, the happier I assume the dog to be. I call it a “Full  Body Wag,” in which the tail, the hindquarters and sometimes even the chest of the dog swings back and forth. In this case, the body is relaxed, the tail is sweeping back and forth, and if the eyes are squinting too.. well, then I’m as happy as the dog is.

However, if a dog stands still, stiff bodied and immobile except for a tail wagging slowly back and forth, red flags start waving in front of my face and tell me to stop what I’m doing. Tail wags that only involve the tail are often the canine equivalent of smiles that only engage the mouth: They are NOT honest indicators of a happy dog, and are often a sign of potential danger.

But here’s one for you: What about “Circle Wag?” I made that term up, so don’t go looking for it anywhere. But in the best tradition of ethology, “Circle Wag” is descriptive, because the tail literally goes around in a circle. Here’s my belief about it’s ‘meaning’ (and that’s all it is, a belief). Circle wags appear to be done by dogs who are extremely happy. I see it on dogs who just adore adore adore a particular person, and I’ve seen on Luke and Will when we finished up a great session of herding and we both were equally proud of ourselves. I can not remember ever seeing it on a dog who appeared to be anxious or potentially aggressive, either defensive or offensively. Many dogs never circle wag, and I have no idea how many dogs actually do it. Ten percent? Twenty?

What about you? Does your dog circle wag? And if so, in what context? I’ll spend some time this week researching the issue (is it described in wolves, in other ethograms, for ex?). I do know that Fox and Bekoff (1975) wrote “The only tail wagging behavior that seems to reliably predict friendliness is a relaxed tail waving in a circular motion.” I would love to hear your own thoughts and observations about what I call “circle wag”.

MEANWHILE, back on the farm: The pup’s name is Hope. I love it. It’s short, it’s fun to say, it’s a traditional Border Collie name (for both males and females, but more boys than girls) and it allows me to say “He’s named Hope because for a gazillion reasons I hope to hell everything goes smoothly from here.”

Here’s the good news: Will circled wagged when he came down the stairs for the first two days after Hope came home. (Thus the topic above.) They appeared to adore each other, they even slept together. I was happier than I can convey, I simply don’t have the words to express how good it all felt. Picture all of us glowing with happiness.

Here’s the bad news; On day three, Hope got his second vaccination, and in 30 minutes he was growling and lunging at Will over a stupid stick on the grass, leaping onto him and growling like a grizzly at other times. He then proceeded to play with me, but frenetically, not in a happy-puppy-kind-of-way. No circles wags were seen. Will became afraid of him, and tongue-flicked when he looked at him. Behavioral changes, especially related to aggression, have been reported after rabies vaccinations, but less often after the regular Distemper-Parvo series. However, the change in the pup was dramatic to say the least: from super sweet grovely-squinty boy to a very different dog, and the only event that one could link it to was the vaccination. I expect I do not have to spell out to you how it all felt to me. I’ve leave it that stress often inhibits one’s appetite, and I did need to lose a few pounds.

Long, long story, short short version: Will avoided the pup all weekend, the pup is now on Chinese meds designed to ameliorate reactions to vaccines, and I’ve been researching vaccine reactions (more on that later). In a day’s time, Hope calmed and became normal with me, but the relationship between Will and the pup was completely changed. Will asked to go upstairs when the pup was downstairs. Hope was no longer submissive and sweet to Will, not aggressive but somewhat aloof. On Tuesday night Hope went to a friend’s so I could concentrate on Jim and his surgery, and came back last Saturday after being a totally lovely puppy with her two dogs (more on that later too).

Sunday morning Will and I came down the stairs and Will completely ignored Hope in his crate. He was clearly nervous around him all day, but there were a few times they each attempted to initiate play. This morning we came downstairs and Will went up to the crate and sniffed Hope’s nose, and later initiated play for a second outside. Their play styles are very different now, but there are indications that Will is starting to relax around him. It goes up and down, mostly they ignore each other. Hope is a lovely, lovely pup, I adore him…. he’s responsive and fun and a total joy to work with. He’s played with other dogs and puppies very appropriately. He’s a bit softer (shyer) than the first pup, but gets over his fears very fast.  I have high hopes that as the weeks go on that Will and Hope will become buddies again . . . Crossing all paws. 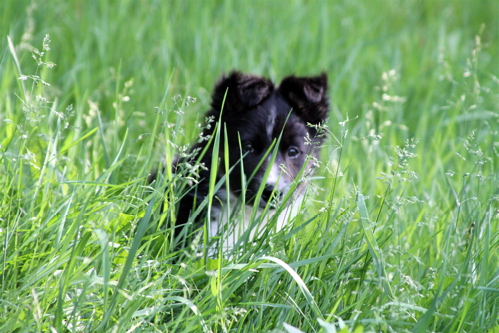