Welcome to an ongoing inquiry about the behavior of people and dogs.
Blog Home >> Animals and the People Who Love Them >> Take Your Dog on a Sniff

Recently I watched someone walking his dog close to my office in Black Earth. Every ten feet or so the dog tried to stop to sniff the ground, and every time she did, the man at the other end of the leash pulled her forward so that he could continue walking. Ah, the canine-primate disconnect, which never fails to appear if we just pay attention. I wrote an entire book about this, The Other End of the Leash, and yet I’m still discovering ways in which we struggle to merge our ethological needs. 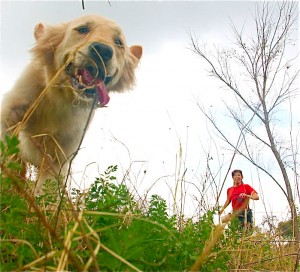 Primates love to walk, at least, terrestrial ones like humans do. Not only that, but we like to walk side-by-side with our friends, to face the world together and exchange the news of the day. While we’re walking we spend a lot of energy looking around—enjoying the view and noting what has changed in the neighborhood. Dogs, on the other hand, primarily want to learn about the environment through olfaction, a sense that we humans are better at than we think, but often pay little attention to. But how many of us insist that our dogs don’t stop to smell the roses, but walk or trot happily by our side? It is why, in Family Friendly Dog Training, I suggest that dogs define heeling as “walk slowly and ignore all interesting things”. This photo, by the way, is Susannah Charleson’s Search and Rescue dog Puzzle, with Susannah in the background. (If you haven’t read her books yet, you’re lucky–because now you get to. Don’t miss them, they’re great.) 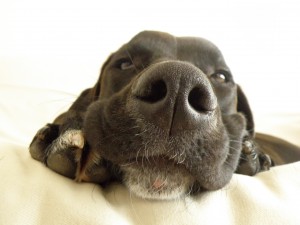 Dog owners aren’t alone in ignoring the olfactory needs of animals. Birte Nielsen and colleagues published an important paper in December of 2015 titled “Olfaction: An Overlooked Sensory Modality in Applied Ethology and Animal Welfare.” They argue, compelling, that we do animals a disservice by not acknowledging the impact of odor on their behavior and wellbeing. These odors can both cause suffering or improve lives. Jenna Bueley, DVM, found that air captured from a busy, stress-filled urban veterinary clinic increased stress-related behavior in dogs, reported at the 2012 IFAAB conference. Clark and King, noted in Nielsen’s article, found that olfactory stimulation increased behavioral diversity and activity levels in captive black-footed cats. But note… the same study found that odors had little effect on the behavior of captive gorillas. Ah, that primate thing again.

You don’t need me to tell you how important smell is to a dog. None of us are surprised that years ago, Bradshaw and Lea found that the vast majority of a dog’s interaction with a new dog related to olfaction (1992). But I think we all, me included, need to be reminded of how much “going on a walk” can be defined by us as “walking while looking and perhaps talking,” while to a dog, “going on a walk” means moving from one interesting smell to another.

It is important, but not natural, for us to acknowledge the essential nature of the sense of smell. Examples of its importance abound: Wells and Hepper (2006) found that day-old pups preferred the scent of aniseed if their mother’s food had contained it while they were pregnant. Think about that—it means that dogs can learn to associate emotions, and thus behavior, with a particular smell even before they are born. (Breeders take note.) It also appears that the perception of scent is lateralized in the brain in dogs. Sinischalchi and colleagues (“Sniffing with the right nostril” 2011) found that dogs preferred to use the right nostril when sniffing new scents, and switched to the left when the scent became routine, or non-threatening. Dogs who smelled arousing stimuli (adrenalin, sweat) never switched to the left nostril. Since the right nostril is linked to the right hemisphere of the brain (it’s an exception to the usual switch, left eye to right brain for example—if that stopped you for a moment, it did me too…), this suggests that olfaction in a dog’s brain is lateralized, and that the sympathetic HPA axis (hypothalamic-pituitary-adrenal, or “on alert!” axis) is primarily mediated by the right hemisphere in dogs. 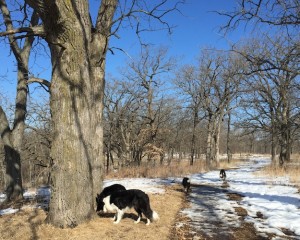 This all circles around to the title of the blog: Take your dog on a sniff. I’ve written before that dogs need autonomy to be truly happy. I’m arguing here that what they most need is the freedom to use their noses. That is easy for us who can walk our dogs off leash. But leashed dogs need owners willing to compromise—an invigorating primate walk with our dogs trotting alongside part of the time, and the rest includes the dog getting, finally, the freedom to go from scent to scent and all the stimulation and information that entails.

Full disclosure: I’ve been good for years about letting my dogs stop to sniff when we are walking on leash, but lest I sound smug, guess how many photos I have of my dogs sniffing something? Three. Only three. That’s compared to literally hundreds of photos of my dogs playing together or with toys. Ah, that primate thing again.

MEANWHILE, back on the farm: I’d have spent some time this morning taking photos of dogs sniffing to make up for the lack of them, except it’s minus 5 degrees Fahrenheit right now. Nope, sorry, not holding metal in my hands this morning; it was enough to have to grab the handle on the barn door to get the hay out for the sheep.

I did manage to take two long walks with the dogs this weekend, even though it was, uh, nippy. We’ve been spoiled by the atypically warm November and December, so this more typical January weather feels a tad chilly. This morning when my fingers began to burn while feeding the sheep I thought, “Oh. Right. This is what cold is like.” But I’m actually quite happy about it; the unseasonably warm weather made me nervous. Not to mention the mud. Now it’s ice on the ground… dangerous but at least I don’t have to towel off paws or bathe three dogs 4-5 times a day.

Soon it’s off to New York City to meet with the publishing house that will be bringing out my memoir in 2017. Folks have asked “what’s taking so long?” so I thought I’d write a post in the near future about what happens between a manuscript being purchased by a publishing house and the book’s actual release. (Spoiler alert: A lot.) I’m taking my camera to the Big Apple, hoping for some fun photos of “city dogs,” in preparation for a post I’ll be writing about City Dogs versus Country Cousins in the near future. Stay tuned. 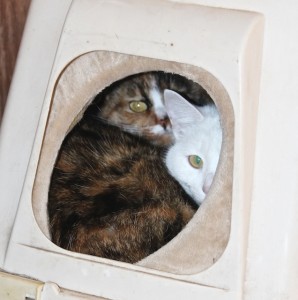 Here’s Nellie and Polly as I found them when I returned home from the office. They’re in their ‘igloo,’ which has a heating pad underneath it. (The cord is ‘outdoor safe,’ or at least, as much as it can be.) When I got home this afternoon Polly was grooming Nellie until I interrupted with my camera. Sorry, girls, go back to what you were doing!

« What Makes Your Dog Happy?
The Blog Dogs »