Welcome to an ongoing inquiry about the behavior of people and dogs.
Blog Home >> Animals >> Tales of Two Species, Essays on People and Dogs

It’s a wonderful thing to hold a book you wrote in your hand, long after the writing and the editing and the discussions with the publishers about cover photos and who to ask for quotes on the back… My new book, Tales of Two Species: Loving and Living with Dogs just came from the printers, and I have to admit it feels good to see it. It’s a collection of essays written over the years for Bark magazine, published by Dogwise (who I call the Amazon of dog books). Working with the editors of Bark has been a joy, and collaborating with the folks at Dogwise has been equally delightful (I presume you are not shocked to learn that this is not always the case between author and publisher? I have been exceptionally lucky with my national books, having wonderful editors at Ballantine who have become dear friends. However, I have heard lots of nightmare stories from other authors. . . (no I’m not telling!)

Here’s a couple of excerpts from the book:

From the essay “Canis Cousins? Unraveling ancestral ties” in the section on Genetics, Ethology and Behavior:

“Dogs aren’t wolves, pure and simple. Except, uh, they are. Sort of. Sometimes. Lest you think I’ve lost my mind, I’d like to explain why the statements “dogs are wolves” and “dogs aren’t wolves” are equallycorrect. I’m writing about this issue because it’s inherently a confusing one, and if we really want to understand our dogs, it’s important to get it right.”

From the essay “A Peaceful Walk in the Park: Strategies for defusing tense encounters while walking a dog-reactive dog:”

“It’s okay!” she waves, her two Golden Retrievers racing toward your dog like cheerful, caramel-colored tsunamis. “My dogs LOVE other dogs,” she gushes, while your mouth goes dry and your heart stops, then resumes pounding so hard you think it might thump out of your chest. It doesn’t matter if the approaching dogs love other dogs–not if your dog barks and lunges every time she sees something with four feet. It’s YOUR dog who is the problem, and there you are, trying to be responsible, keeping your dog leashed and under control, while those around you let their dogs run free and turn yourrelaxing walk into a stress test.”

And finally, from an essay titled “Rites of Passage: Navigating the loss of a beloved dog.”

“Tulip was as beautiful in death as she was in life. Her long white fur covered her thin old body like a fluffy blanket. Her eyes were peacefully closed, and she looked as though she might wake up at anymoment and plunk her huge white head in my lap for petting. Tulip died at the admirable age of 12 years, 10 months, a legendary length of life for a Great Pyrenees. But this is not an essay about Tulip, although like many of our dogs, she deserves an entire Library of Congress written about her. Rather, it’san essay about coping with the death of our beloved dogs, and specifically, about how best to cope in the hours right after they die.”

[and how can I resist a photo of Tulip when she was still alive, taken by Amanda Jones?] 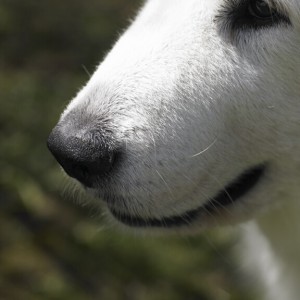 The book is a “curl up n the couch with your dog” kind of book, so I guess it’s release at the onset of winter is well timed. At least, it’s definitely November here in Wisconsin… look at the difference between the pictures of the Japanese Maple in front of the farm house a month ago compared to now…. ah, the greys of November. Tomorrow the high is supposed to be 34, with high winds and sleety rain. This does not bode well for the planned “clean out the barn” day tomorrow, which includes scrubbing the cement barn floor with bleach after all the old straw and manure is hauled out by a bobcat (not the living breathing kind) and two strong neighbor boys (and okay, me and Jim). Wish us luck! 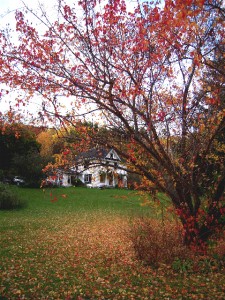 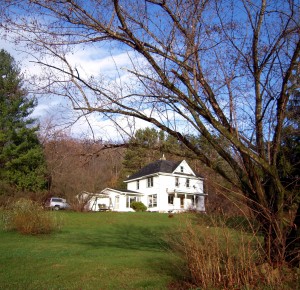