Welcome to an ongoing inquiry about the behavior of people and dogs.
Blog Home >> Animals and the People Who Love Them >> The animals of the Holy Isle

It took us two days and driving through the remnants of Hurricane Katia, (with 80 mpg winds) but we finally made it to the Isle of Arran. Once there, we took another ferry to the tiny Holy Isle where we hiked up the two middle mountains in search of the islands unique animals: the  Eriskay ponies, Saanen goats, and Soay sheep.

I was most interested in the Soay sheep, who are believed to be closely related to the wild-type predecesser of the domestic sheep, the mouflon. I talk about the origins of domestic animals in my UW class, and have lectured about mouflons for years.. and here was my chance to see animals as close as it comes to ancient sheep. And there they were: grazing on the grass right in front of the pier. They were very tame, so we were able to sit and watch them while we rested from our  hike. I noticed that they used their horns with abandon,, making lateral thrusts to “resource guard” the best patch of grass.

Here’s some of the ponies standing in bracken ferns. There are 3 bands on the island and it was great to see them both from a distance grazing on far hills and up close like these three. One band had two young foals, but I don’t have a good photo of them. 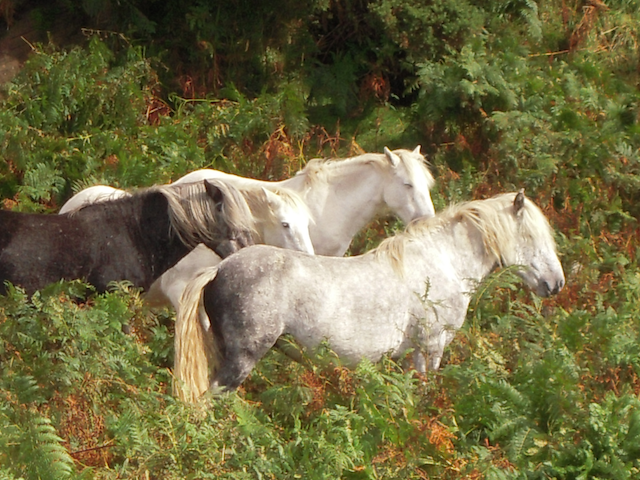 And here’s why we were resting after our four to five mile hike. We were already partway down when I took this picture of Jim and the view. A picture of me would’ve shown a muddy butt cuz it was so steep in parts that I slid down on my rear end. A rock climber I’m not, and I don’t mind admitting I was truly scared for part of it. But we made it down and it was worth it — what an amazing view, hey? 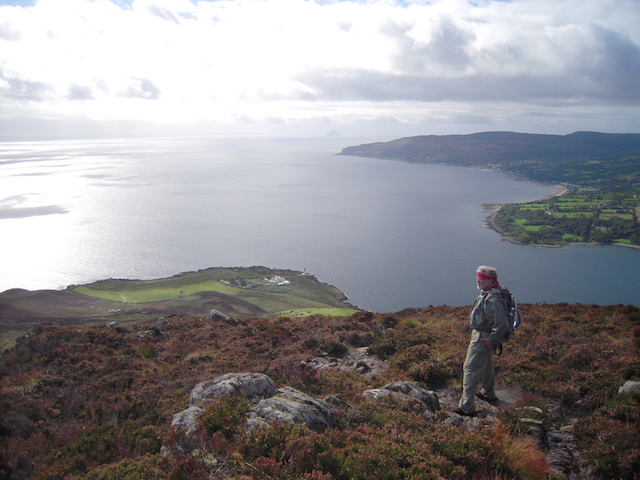 Now we’re in Penrith, a few miles from the World Sheepdog Trials. We’ll be there much of Friday, Saturday and Sunday.  Can’t wait! I’ll send reports as I can.