Welcome to an ongoing inquiry about the behavior of people and dogs.
Blog Home >> Animals and the People Who Love Them >> The Beauty of the “Ready” Cue

Ah, spring is finally coming. Along with the mud. I don’t know about you, but here in Southern Wisconsin the winter has been so severe that the ground is frozen as far as six feet down. Six vertical feet, just in case you’ve never had to dig fence post holes, is a long, long way. That means it will take a long time for the ground to soften, and a longer stretch than usual of dealing with mud. There is no where for the melted snow or rain to go when the ground beneath is frozen solid, so “mud season” means wiping dog off paws every time you go back inside after being outdoors.

Yesterday, while wiping off Willie’s paws for the first time in months, I was reminded of how much I love the cue “Ready.” I wrote about it in 2010, but thought it was worth a reprint, given how many of us will be dealing with muddy paws for a few months to come.

From April 2010: As I was drying Willie’s paws a few days ago, I thought about how much easier it is now that I say “Ready?” right before I pick up each leg. Since I started communicating my intention (“now I am going to pick up this paw”), he is beginning, on occasion, to pick up a paw himself, but more often he will shift his weight so that it is less awkward for him. (Yep, I could train him to pick up each paw on cue… also a potential solution, but keep reading for some potential benefits of a more generalized cue.) Keep in mind that this is the dog who, as an adolescent, growled at me when I picked up a paw to dry off the mud. That was 3 years ago, and I remember saying something like “Oh, don’t be silly” and continuing what I was doing. He growled one or two more times, but we worked through it and I haven’t heard him growl at anything in years. However, he doesn’t enjoy his paws being cleaned, as most dogs don’t, and the process got me thinking about how little control a dog has over having his/her body moved around, even gently, without any say in the matter. That’s especially difficult if there is any pain involved in putting more weight than usual on one limb. I’ve always been aware of Will’s bad shoulder, and have always been extra careful about picking up the other paw, but a few months ago I started saying “Ready?” right before I picked up a paw, giving him a chance to shift his weight himself.

It’s made a difference to both of us. I lean down and put my hand close to a paw and say “Ready?” and he either shifts his weight or picks it up. Paw cleaning is not only faster, it feels like Will and I are moving down the same path, instead of trying to go in opposite directions. This is a cue that has so many applications; Will’s structural troubles require acupuncture and chiropractic, and he’s not the kind of hail-fellow-well-met who takes being handled lightly. I would bet the farm (and, hey, I have one) that handling Will with force and punishment would have created a severe aggression problem within a few months. In both cases, we give Will lots of options, using patience and communication during the treatments. He adores both practitioners, but he literally hides behind me when the greetings are over and it’s time for treatments. But we work through it, sort of like a dance; sometimes asking, sometimes quietly insisting, but always with an awareness that Will desperately needs to have some say in what is happening to him.

I know many others use cues like “Ready” for a variety of reasons. I’ve heard similar cues most often in obedience, meaning “Okay, time to start working together”. But I’ll bet there are many examples from your own experience of using a cue to communicate your intentions to a dog. I’d love to hear them. I think we’d all learn something from hearing about all the ways that concept can be used. (By the way, signals like “Ready” are called “meta-communication,” meaning “communication about communication.” A play bow is an example in dogs, meaning “Everything that happens next is in play, don’t take these bites and growls seriously!”

Update, March 2014: Since I wrote the words above, Willie needed a lot more medical care, and so I taught him lots more cues to make handling easier. For example, he quickly lies down on his side when I say “Acupuncture.” I use this cue now for lots of things, including stretching out his shoulder to keep it flexible, grooming and exams by veterinarians. I keep it always fun by asking for it often when no treatment is necessary, and giving him lots of treats for doing it. It is a perfect example of the beauty of operant conditioning, as used by zoological parks for example, when needing to handle or perform a procedure on an animal who willingly complies rather than is forced. I can’t imagine living any other way now.

MEANWHILE, down on the farm: Yup, it’s muddy. And icy. The ridiculous weather of March in the Midwest is in full form, from taking walks in 10 degree weather to listening to the the ancient, dinosaurian croaks of returning Sandhill Cranes. One moment you’re pulling on your long johns to stay warm on the morning dog walk, the next you’re standing breathless over the inch-high, bright-green leaves of daffodils poking up beside a snow bank. “Mud/luscious” and “puddle wonderful,” in the words of E. E. Cummings, and far be it from me to try to improve on that.

The sheep must be happy. Yesterday they went up the hill and found something at least approaching grass on the high hill, instead of ice and snow. It made me happy just to see them up there. 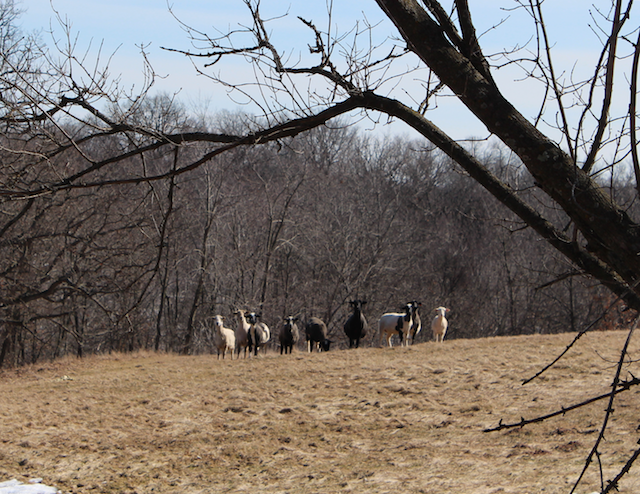 Not a very colorful photo, is it? But it is a good illustration of the brown of March.  Brown grass. Brown trees. Brown, brown, everywhere brown. Or maybe grey.  That’s why, when we see what is in the photo below, for the first time in five months, we stop and take a breath and feel the sun and think that yes, yes, we’ve almost made it through the winter. 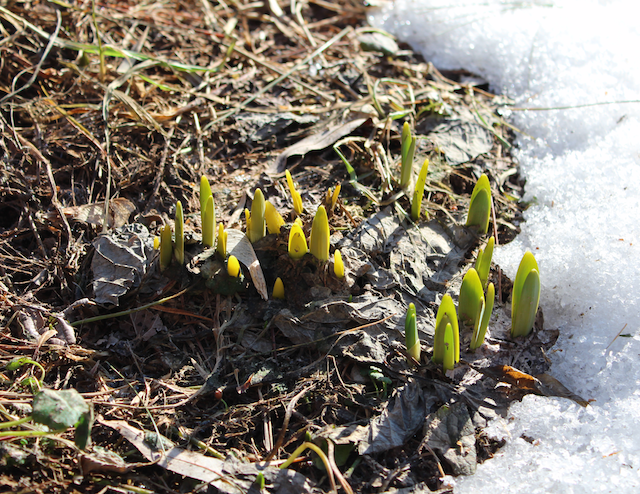