Welcome to an ongoing inquiry about the behavior of people and dogs.
Blog Home >> Animals and the People Who Love Them >> The Books Behind the Book

I spent three years writing The Education of Will before deciding that I would go ahead and publish it. I wrote and wrote and wrote for myself, as a well-documented way to resolve baggage from my past and move on. I had wanted to try writing fiction, but got discouraged by editors and agents who said, “Well, that’s a very difficult world to enter; every week publishers are blasted with a fire hose of works from hopeful fiction writers.  Why don’t you write a memoir?” I had no plans or interest at that time to write a memoir (don’t you have to be, ahem, older?), but I was also working with a brilliant therapist at the time who encouraged me to write about some of the things we were talking about. Not for her, not for anyone else, but just for myself.

Writing is a powerful thing. I often wonder if we humans would be anywhere near where we are today if not for the written language. I’m sure that most of you have noticed that writing something out, anything–from a dog training plan to an entry in your private journal–helps to clarify things. Reading can be equally powerful, and if it wasn’t for the books I am about to mention, I guarantee you I would not have had the courage to write The Education of Will. Here, then, is a testament and a thank you to the authors of the following books, whose wisdom, compassion and courage are an inspiration to us all.

“From shell shock in World War I to childhood sexual abuse today, the reality of trauma has been denied. But as this indispensable book makes clear, ‘Remembering and telling the truth about terrible events are prerequisites both for the restoration of the social order and for the healing of individual victims.’”
—Gloria Steinem, New York Times’ T Magazine

Daring Greatly: How the  Courage to be Vulnerable Transforms the Way We Live, Love, Parent and Lead, by Brené Brown

”The brilliantly insightful Brené Brown draws upon extensive research and personal experience to explore the paradoxes of courage: we become strong by embracing vulnerability, we dare more greatly when we acknowledge our fear. I can’t stop thinking about this book.” –Gretchen Rubin, New York Times bestselling author

After Silence: Rape and My Journey Back by Nancy Venable Raine.

“After Silence is a book that dignifies the human spirit. It should be read by everyone.”
—New York Times Book Review

Radical Acceptance: Embracing Your Life with the Heart of a Buddha by Tara Brach.

“Radical Acceptance offers gentle wisdom and tender healing, a most excellent medicine for our unworthiness and longing. Breathe, soften, and let these compassionate teachings bless your heart.”
— Jack Kornfield, author of A Path with Heart and After the Ecstasy, the Laundry

It will come as no surprise that merely writing about these books make me nervous. But Dr. Brown gives me the courage to be vulnerable, Dr. Herman the knowledge that truth telling is the key to recovery, Nancy Venable Raine the commitment to have a voice, and Tara Brach the wisdom to accept being afraid.

Here’s my question for you: What book(s) make you stronger, braver, better? I’d love to hear.

Here’s a short excerpt from my own book, which I initially wrote for myself, but finished in the hope that it would help even just one person as much as the books above have helped me:

It took a long time for me to get over the death of Willie’s uncle Luke. He was otherwise brimming with health, exuding a vitality that no dog I’ve had has ever matched. I fought the reality of his untimely death daily for years after he passed away. If only I had figured out why his kidneys were failing. If only I had been a better person, a better dog owner, a better animal behaviorist who knew how to get my dog the best possible medical care.

Luke’s headstone is at the top of the farm road that leads to the pasture high above the farmhouse. It is a rough-hewn slab of granite that sits in the grass where Luke used to wait for me to catch up with him so that we could work sheep together. He would stand on the hill’s rise, silhouetted by the sky, and turn his head to me as I walked up the slope behind him. “Are you coming? Hurry! I see them! They are there, over there. Can I go get them?”

In the years after he died, sometimes I’d sit down beside his grave with no purpose except to be close to what was left of him. One crisp fall day years after his death, when I was still fighting the “if only” battles, I looked at the words engraved on his headstone: “That’ll do, Luke, that’ll do.” These words, in sheepdog speak, tell the dog that his work is done for the day. I put them on the headstone to tell Luke that it was time to let go of his responsibilities. Your work is done now, Luke. That’ll do.

As I sat in the sun and listened to the crickets buzz, I suddenly felt as if Luke were standing behind me. Of course I knew he wasn’t there, but I still felt him standing in the grass, looking at me with his usual bemused expression. The feeling was so strong that I couldn’t resist turning my head to look behind me. There was nothing there but grass and sky. My eyes rested on Luke’s headstone as I turned back around, and I read the words on it as if for the first time: “That’ll do.” Oh. Okay. I stood up and felt layers of guilt shedding off me, as if I had just entered a warm house on a cold day and removed a heavy coat. I let go of my guilt over Luke’s death, as well as much of my guilt over what had happened in my past, and left it lying on my good dog’s grave. It was the last and best gift that Luke ever gave me.

MEANWHILE, back on the farm:  Sun, wonderful sun! I’ve been working inside so much, but finally got a chance to be outside in the sun this weekend. Joy…. Couldn’t go out though with out my Stabil-Icers. They are much heavier than Yak Tracks, but those wear down after awhile, and the Stabil-Icers have bolts that can be replaced. I haven’t had them long, but am very glad to have them. (Thank you Renee for telling me about them!) 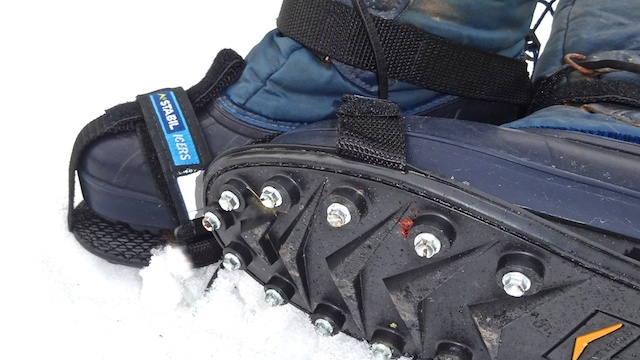 I just got back this afternoon from a woods walk with the BCs, and they played their usual game of tug once we got out to the pasture. Maggie first looked everywhere for the sheep, but finding none, decided a tug game was better than nothing. (The toy you see is a modified Kong Toy, not designed for two dogs to play tug with. It comes with a round ball on each end, which Maggie once bit off, leaving a ball perfectly designed to get stuck in her throat. So we cut each end off, because the dogs love love love playing tug with it.) 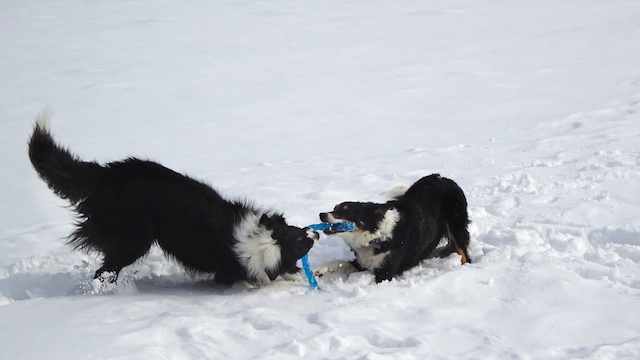 Here’s to the opportunity for all of us to play in the sunshine.

« Holy Moly, Trisha’s on Twitter
Collars I have Known and Loved. Or Not. »