Welcome to an ongoing inquiry about the behavior of people and dogs.
Blog Home >> Animals and the People Who Love Them >> The Boy Who Was Raised as a Dog

Justin was a six-year old boy who had spent five years, from age one to age six, in a kennel. His caretaker was not intentionally cruel, but was cognitively challenged, and had no idea how to raise a child. He felt it was best to care for him as he did his dogs. Justin and the dogs were fed, given shelter, let out of their kennels on a daily basis and give occasional moments of care and compassion. The rest of the day they were on their own.

Child psychiatrist Bruce D. Perry, MD, PhD, met Justin after he’d been rescued and hospitalized. Justin’s behavior was so disruptive–it included shrieking and throwing feces–that he was eventually kept in a crib with iron bars and a plywood cover. Perry remarked that the child was basically living in a dog crate. Again. 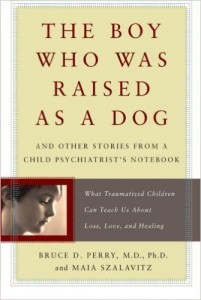 In The Boy Who Was Raised as a Dog, Dr. Perry writes about his experience with Justin, as well as other horrifically abused children, to inform the world about the effect that trauma has on a developing brain, and how he and his team have gone about helping damaged children to heal.

The book is flat out brilliant, and anyone who works with an individual who has been traumatized, human or canine, should read it. I picked it up on the advice of my host in Spain, Luis Souto-Soubrier, and I’m grateful that he mentioned it to me. I’ve believed for years that many of the dogs I’ve worked with had behavioral problems because of some kind of trauma, and I think a lot about what we’ve learned working with human trauma victims can be applied to dogs.

Of course, what we can’t do it talk to dogs, ask them what happened, or advise them to start writing in journals or drawing pictures. All of those things, done the right way at the right time, can help victims heal from all kinds of traumas. But what CAN we incorporate in working with dogs who behave as if they have been traumatized?

Much of what he writes about reinforces what I’ve learned in the past and spoken about at APDT in 2014 in a talk titled People, Dogs and Psychological Trauma. Here’s the essence, the essential points from what is a very complex topic:

How do we identify the dogs? We can’t ask them, and they can’t tell us that something horrible happened to them in the past. So often dogs are “diagnosed” as “dominant” or aggressive for some reason that involves what we’d think of in people as character flaws. To my surprise, this happens commonly with children; many of Perry’s cases involved victims who were diagnosed with a range of issues, from ADHD, to just being plain stubborn or manipulative. Rarely had anyone ever asked what had happened in their past that might explain their behavior.

Here are some symptoms we can look for that MIGHT indicate trauma in a dog:  Anorexia, won’t eliminate, pacing, inability to sleep, hyper-vigilance, extreme fear, being easily startled, outbursts of aggression or rage that have no predictable pattern, and refusal to play. Of course, this list is just a start, but we have to start somewhere.

If we suspect trauma in a dog’s past, then how might we go about trying to help him or her? Again, we can look to what helps people:

Create a sense of safety. Job One, no question. Traumatized individuals have a brain set on constant alert. Without doing all one can to create a sense of security, it’s impossible to go much further. With dogs, that might mean letting it have a “safe house” to go to, without being forced to interact for predictable portions of the day. In my experience, a lot of dogs are pushed too far too fast, without being given time to feel safe and secure.

Give the dog some control. Victims of trauma were subjected to experiences that stripped any feelings they had of autonomy. Perry’s first sessions with the children he worked with was to give them control over the session. Want not to talk? Fine. Let’s color together. It was up to the child to initiate conversation. Dogs can get back some sense of control too, by teaching them appropriate behaviors that get them what they want, and letting them learn that they have some control over what happens to them. This means that the use of force must be avoided whenever possible. Granted, there are times it is needed to keep an individual safe, but being forced is the opposite of being in control (by definition), so we should avoid it whenever we can.

Social Support. Dogs and people both are highly social species; that is, of course, why we get along so well. One of Perry’s most important observations is that much of what healed the children he worked with occurred outside of therapy. What mattered most were relationships–social support from others that provide a sense of belonging, security and being loved. I suspect the same is true for dogs. Of course, it can be extremely difficult to create a relationship with an individual who has experienced profound trauma (especially if the trauma was in the early part of life when the brain is still developing), but it is the key to helping victims heal. Surely it is true also for dogs. The challenge of this leads to my last point…

Time and patience. Perry says: “I also cannot emphasize enough how important routine and repetition are to recovery. The brain changes in response to patterned, repetitive experiences: the more you repeat something, the more engrained it becomes. This means that, because it takes time to accumulate repetitions, recovery takes time and patience…” He goes on to note that regrettably, neither qualities are in abundance in today’s society. Agreed.

There is so much more in this book that can apply to dogs: One of the most important is his “neurosequential” approach, which involves figuring out the stage of brain development at which the trauma occurred, and providing what the child didn’t get at that stage of development, even if it has little to do with the child’s chronological age. That is trickier with dogs, but the fact is that understanding the brain and its development in relation to behavior is an important ingredient in treating trauma. His use of appropriate medication (very thoughtfully used) and heart rate monitors is also something we need to continue to explore with dogs. (Note the groundbreaking work done by CAABs Peter Borcheldt and Nancy Williams on heart rate variability in dogs.)

This is such a complex topic, I could write about it for hours for today. But I’ll stop here, except to direct you to a few other interesting sources. Two related articles that I’ve written discuss the relationship between digestive problems and fear and how Confrontational Techniques Elicit Aggression. (Note that many of the children Perry writes about were subjected to extreme force as “treatment,” including by professionals in the field.) You might also be interested in the work of Rise van Fleet, a child psychologist who uses play to work with traumatized children, and has used similar techniques to help traumatized dogs.  The best book I’d ever read, up to reading Perry’s book, on trauma and recovery was written by Judith Herman, titled, appropriately enough, Trauma and Recovery. As I said, it is such a big topic. But if it interests you, pick up Perry’s book right away. I read it almost cover to cover yesterday and this morning.

I’d love to hear your thoughts on this important and complex topic. Please write in with anything you have to add; I look forward to reading your comments.

MEANWHILE, back on the farm:  A glorious weekend at the farm, even if much of it was spent scraping paint and washing the siding (and reading Perry’s book). But the weather was perfect, and I got time to work Maggie at friend Donna’s farm. She did well; Donna’s sheep can put on a lot of pressure, but are easier to work than my stubborn group of ewes. Here’s Maggie driving them around me in an alfalfa pasture; I love the back lighting: 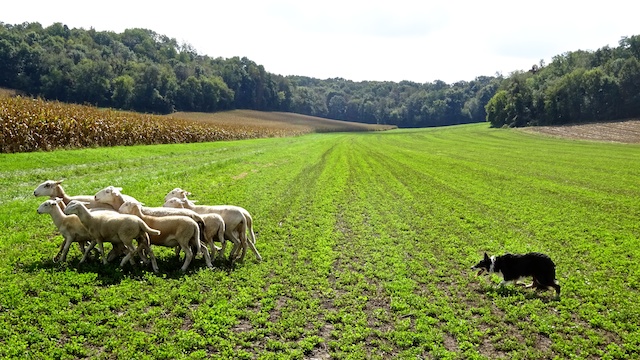 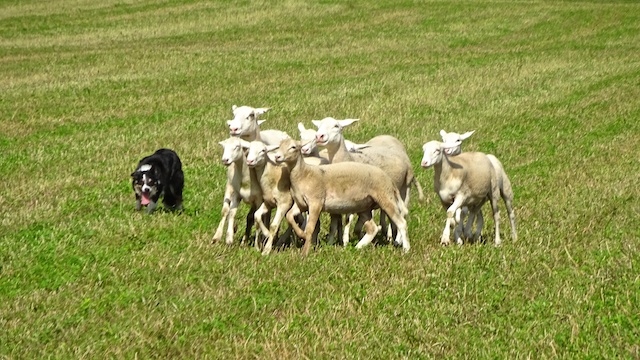 Jim took Willie on a long leash walk while I worked Maggie. Poor Willie is on week six of leash restrictions, after re-injuring his bad shoulder. We’re seeing his physical therapist at UW this week, cross your paws that she thinks he’s healing up well.

And last but never least, here’s Tootsie enjoying cuddling on the bed in the tent camp, while we enjoy watching the sun rise over the fields. Jim grilled pork chops on the fire last night, and all five of us slept like tired puppies in our cozy tent at the top of the hill. What a wonderful way to wake up! 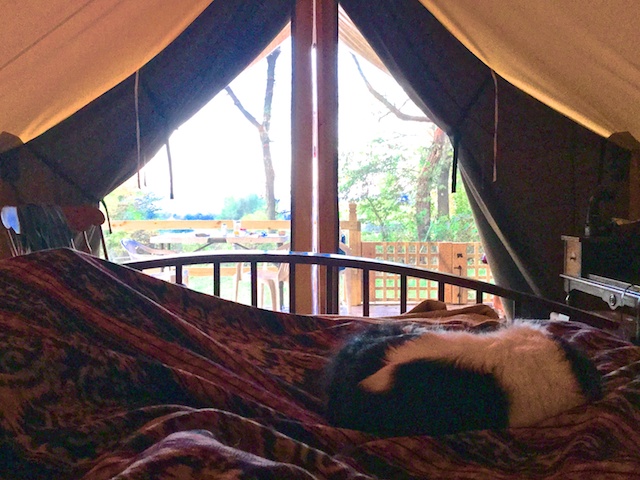