Welcome to an ongoing inquiry about the behavior of people and dogs.
Blog Home >> Canine Cognition >> The Concept Formerly Described as “Dominance”

Ah, here I go into the fray. Picture my loins girded. In some ways I’d love to avoid this topic altogether, because as most of you know, conversations about “the D word” can sometimes turn into arguments that make the American health care debate seem like a day at the spa. (I was going to say “like a tea party,” but then . . . )  But I think the issue is important, and deserves consideration. So EEEEE HAH! here we go.

This post will only be a beginning, because the topic of “dominance” and social relationships is actually a big one, and I’d like to facilitate a thoughtful, meaningful discussion about it in dogs. As you all know, some people think that just about all of our problems with dogs relate to “dominance” and advise owners to “be the alpha dog.” At the other end of the spectrum, some argue that “dominance” and even the concept of “social status” are completely irrelevant to a dog’s behavior, and that the terms should be struck from our vocabulary. I don’t agree with either extremes of the spectrum (but I’m a lot closer to one than the other!), so hang onto your hats, here we go . . .

First of all, it would be good to start with a definition. The simple definition of ‘dominance,’ as the term is used by the general public is something like: “control or command over others.” However, (and this is a huge “however”) that is NOT the definition as the term is used by people who study animal behavior, the ones who first coined the term to describe a certain kind of social relationship in non-human animals. In ethological terms, “dominance” refers to “priority access to a preferred, limited resource“. In other words, if there’s only one really great table open at a restaurant, who is going to get it? You, or the famous actress standing beside you?

Relating this to dogs, if someone dropped a pork chop between two dogs, who would get it? If you repeated this numerous times and the same dog got it every time, that dog was described in the literature as “dominant” over the other IF both dogs wanted the food equally.  The “dominant” dog could get priority access to the food in a variety of ways; s/he could simply look toward the other dog with a hard stare, could try to be the fastest one every time, or could fight for it. The problem is that fights are dangerous if you are a predator who can rip open elk hide with your mouths. (For a reminder of the power of the canine jaw, try making a gash in a leather purse with your teeth. If you are successful, please send video….heck, send one if you’re not successful!)

The potential of injury in social predators, is the reason that many argue why social hierarchies developed in animals like wolves. (Yes, I know dogs aren’t wolves. Bear with me here.) If every time one had to fight for what one wanted, the genes that predisposed an individual to fight would be eliminated out of the gene pool. That’s the explanation for the existence of social hierarchies: they allow individuals to get ‘priority access’ without having to fight for a resource every time it was available. Note that serious fights do happen in some species: In many ungulates (hoofed animals like elk for example), the males fight every breeding season for priority access to females. They are continually challenged by other males, and spend so much energy guarding their females that even if they aren’t killed or injured in a fight, (it happens, but not commonly), they sometimes die over the winter, having been unable to spend enough time feeding in fall to put on body fat to get them through the winter. However, before they are mature,  young male ungulates often spend years in “bachelor herds,” in which they may play at fighting, but no one individual has priority access to anything else during that period. Their food is widely dispersed and the only ‘resource’ they need to compete over is females during a breeding season. As this Elk examples shows,  a ‘resource’ can be many things, from a pork chop, to the best sleeping place, to a female in heat. But, remember, the “D” word is about “priority access to a resource,” not about anything else.

Here’s what “dominance” ISN’T: It has nothing to do with decision-making about the actions of a group or one other individual. There is no relationship in the literature between who decides when to move on, where to go or what to do. Period. (Bookmark this point!)

It has nothing to do with “who’s in front.” (In prey animals, the ‘dominant’ member of the group is often found in the middle of the herd if the group is in an area that might be dangerous.)

It is not fixed and immutable: Who “has dominance” can vary in time (as one individual ages for example), in space (one individual can have it in one area and not another) and in context (perhaps one individual with dominance doesn’t like pork chops.) In some species it appears to be linear (as in chickens, for example, in which if A is over B, and B is over C, then A is always over C). In most social mammals, it is non-linear and much, much more fluid and complicated.

It is highly influenced by resource distribution: “Clumped, high quality resources” tend to exaggerate social hierarchies, which probably explains why captive wolves appear to be absolutely obsessed with hierarchy, while wild wolves appear to be more relaxed about issues related to social status. (Keep this in mind for later when we talk about studies on feral dogs versus owned dogs.)

It is usually maintained by visual or chemical displays that are innate and are species-specific. It can be achieved by an initial fight in which one individual wins and the other backs off, or, more commonly, by nothing more than the types of display specific to that species. (Think high tail, erect ears and forward posture of a captive wolf). If the individuals continue to fight over a resource, then there is not an established hierarchy.

It is not a relationship desired equally by all individuals in a group. In complex social societies, not everyone is equally motivated to be first in line for the goodies. In our species, for example, some people would love the status associated with being famous, while others would consider a guarantee of a great table at a restaurant to be a poor trade for losing their privacy and would avoid it at all costs. In some species, high status is associated with increased responsibility, which can be dangerous and burdensome.

That’s a good starting place for our discussion. In my next post, I’m going to write about how all this might relate to domestic dogs. But I will say here that the misuse of the term “dominance” in dog training is so pervasive that it causes ethologists like me to want to poke pencils in our eyes. The examples are endless: “Your dog won’t come when you call unless he accepts you as alpha!” (Uh, not relevant, see above.) “Teach your dog a “Dominance Down” and he’ll respect you in the morning!” (Uh, not relevant, see above….). I suspect that much of this comes from the two different definitions of dominance used by the biologists versus the general public. I also think, although I admit to just guessing, that our species loves the idea of control, and anything that suggests we can get it easily is seductive. Whatever the reason, the mis-use of the concept of “dominance” is pervasive.

I’d love to hear your examples of the misuse of the term. I suspect there are some egregious ones that will allow all of us to have a good laugh… and then move on to talk about whether the “D” word is ever (ever!) relevant to dog behavior. Do be considerate please, and don’t assume that everyone believes that way you do. Remember, thoughtful and considerate . . .

Meanwhile, back on the farm: UW is on spring break and besides running the business (and writing blogs!) my life is full of two other things: grading term papers (right now it’s the ones on: “Biological Issues Related to the Use of Non-Human Primates in Biomedical Research” — both ‘sides’ must be covered objectively; next it’s Cloning Pets) and of pacing the barn floor. I have 4 ewes who are overdue, one by 5 days. A day or two is, of course, meaningless, lambs paying no more attention than babies to when they are supposed to arrive. But 5 days? Jeeeez, Dorothy, have your lambs already!

Here’s the first of the lambs: A twin boy and girl from Lady Godiva. The all-black ram lamb is lying behind Lady G and the ewe lamb with the white body and black eye spot. I’m calling her the Lassie Lamb. 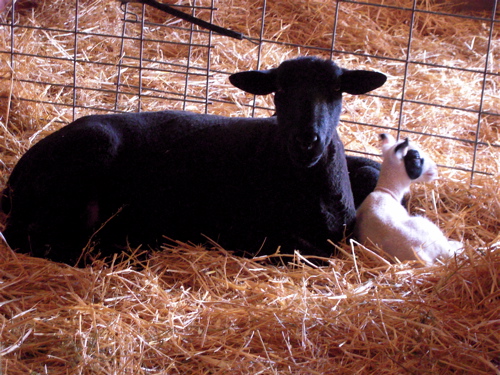 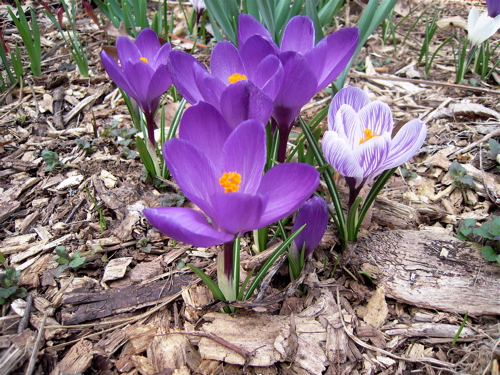 And lest you think it’s all lambs and flowers out in the country, here’s a photo of just a few of the hundreds of Asian beetles that invade my house for 2 weeks every spring and fall. They were brought over to control aphids, and the person who made the decision to import them wouldn’t last a day in southern Wisconsin. They are a scourge, somewhat akin to locusts. What you are seeing was taken about 10 minutes after 30 minutes of vacuuming, which followed another long session of vacuuming earlier in the day. They look like our native “Lady Beetles,” but they have no natural predators, bite when they’re hungry, smell horrific, land in your drinks, fly into your food and generally make life miserable. You can spray for them, but the active ingredient makes me sick and and is not safe for cats. Now you know why I went out for dinner tonight. 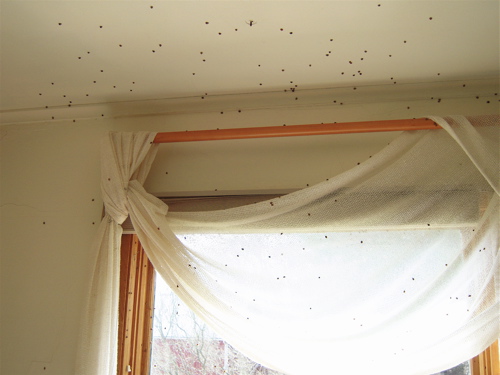 « Starting from the Beginning
Lambapalooza! »