Welcome to an ongoing inquiry about the behavior of people and dogs.
Blog Home >> Animals and the People Who Love Them >> The Eye of the Trainer by Ken Ramirez 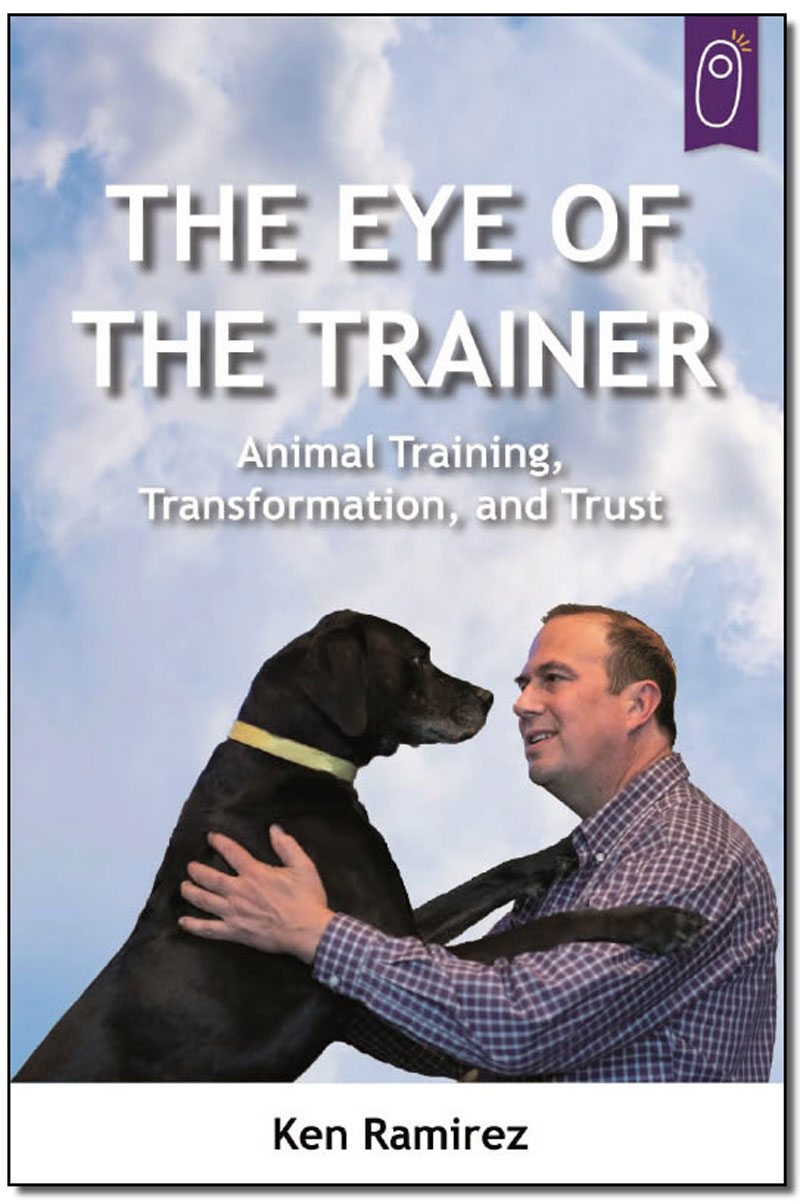 I always have the same reactions after seeing Ken Ramirez speak or watching him train. One: He is an astoundingly good animal trainer, possibly the best I’ve ever seen. Two: I myself am, by comparison, completely incompetent. Three: I can’t wait to go home and train everything. Or anything. Right away. Because I know I’ll be better than I’ve ever been before after watching Ken train.

That sums up Ken’s brilliance–presenting what he knows in such an organized, thoughtful and benevolent way that you leave his presentations excited, no crazed, to put into practice what you just learned. Rather than feeling discouraged by the gap between his abilities and my own, I always end up feeling inspired.

The same thing happened after reading just the first few pages of his new book, The Eye of the Trainer: Animal Training, Transformation, and Trust. I read it practically cover to cover standing in the kitchen, and immediately went back to teaching Skip “Look” (at me) as soon as he sees a cat. Mindful of one of his first “overlooked fundamentals,” I upped the reinforcement rate, as Ken advises not just for new behaviors, but to maintain ones already learned.

This passage also reminded me how incredibly fast Ken reinforces when working with an animal, as did Steve Martin when I spent a week with him and Dr. Susan Friedman at Natural Encounters training Macaws and crows. (Here’s a post I wrote about my week there; you really want to go if you can!)

What I learned by watching Ken and Steve is that speed dazzles. They’d ask for a behavior repeatedly so fast it made your head spin. Funny, I always used that kind of speed myself when training dogs to heel–I walk fast, really fast–because it keeps a dog’s attention and makes the entire process interesting. But it took watching Ken and Steve to motivate me to up the rate of reinforcement for all new behaviors, not just by reinforcing a behavior that you’re starting to take for granted, but by increasing the number of reps/minute. (Steve trained crows asking for a behavior with less than a second in between requests. We coined the phrase “Crow Speed” for things that happen so rapidly you can barely keep up. Working fast inherently ups the rate of reinforcement, and ups the number of reps too. Skip seemed to agree: I asked for a Look as fast as he could turn his head toward a kitty sunning outside the window, and he seemed to be having as good a time as I was during the session. 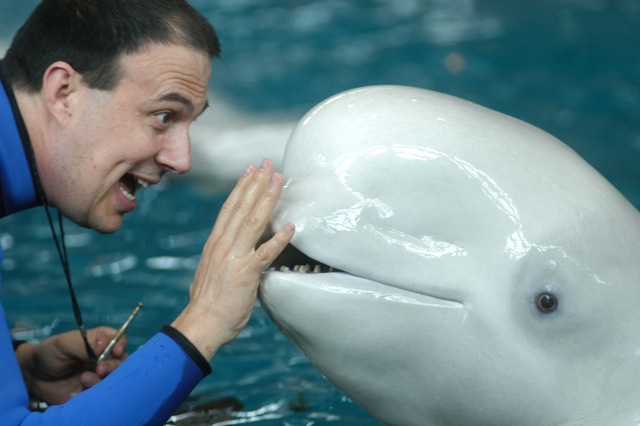 Ken gave me and Jim an insider’s tour of the Shedd  Aquariam years ago. It was a highlight of life.

There is so much to love in Ken’s new book. One of the things I admire about Ken is his thoughtful, objective approach to different methodologies. For example: He argues that clickers are great tools, because they are precise and consistent (if used properly, he qualifies). However, he also argues that other markers can work well, and which one is best depends on the animal, the trainer and the circumstances. Rather than being bound to one method, he carefully analyzes the pros and cons of each one.

I don’t use clickers now, after watching Steve Martin and other Natural Encounter trainers use nothing but their voice to train elaborate and complicated behaviors . And, I should mention, after years of misplacing and losing clickers. I finally accepted that I am absent minded, and that’s never going to change. But I’ll always have my voice no matter how forgetful I am. I use “Good” (as do many of the Natural Encounter trainers). Some of my colleagues use a tongue click. Ken reminds us that a good marker is not just consistent, it is “unique to the environment,” which makes a clicker superior to a spoken word. I have no doubt that’s true; I think clickers are awesome. But then, there’s the fact that I’m dealing with the reality of me, not some idealized world of perfection. (I should add that “Good” works well for me. I say it very fast and at medium pitch. When I got back from Natural Encounters I trained Nellie, The Cat Who Wants To Live in the House In Spite of Trisha’s Cat Allergies, to go to the door to the garage and jump onto her feeding station in a a few days. No more following her around the house to pick her up and take her back outside.

He also has a great section on targeting and shaping. He is an advocate for arranging the environment to help an animal succeed, and thus argues that using prompts are a great way to help an animal know what it needs to do to get a reinforcement. Of course, you have to fade them out as fast as you can, otherwise they become the cue. But, as he does with all things, he analyzes the pros and cons of every method, with a goal toward “what works best for the animal?” You might be especially interested in the section on Free Shaping, if you’ve been part of the conversation about it.

The first chapter contains the “Six Most Overlooked Fundamentals of Successful Training” and are worth the price of the book. It’s only four pages long, and we should all print them out and put them on our mirrors. Besides his wisdom about training (which he emphasizes is based on trust), the book contains stories from his travels that entertain as well as educate.

Bottom Line: You really, really want this book. Get it now, because Dogwise sold out of their first order the day they advertised it.  And if you’ve been lucky enought to work with Ken at The Ranch, the Karen Pryor National Training Center in Washington state, tell us about it!

MEANWHILE, back on the farm. Lots of sunny days, whee! Lots of days with the temperature over freezing, so the snow is disappearing. Of course, that means that in some places there is still deep snow, in some ice, and in some squishy mud. Well, that’s March. I call it Mud Madness, when the mud sits on top of still frozen ground. If you’ve never lived where the ground freezes, think three inches of chocolate icing on top of a formica floor.

Breaking news! I can’t believe that we saw the first blooming crocus this weekend. Not here at the farm, but in Verona outside of a great coffee shop/yarn store the Sow’s Ear in Verona, WI. Wow. 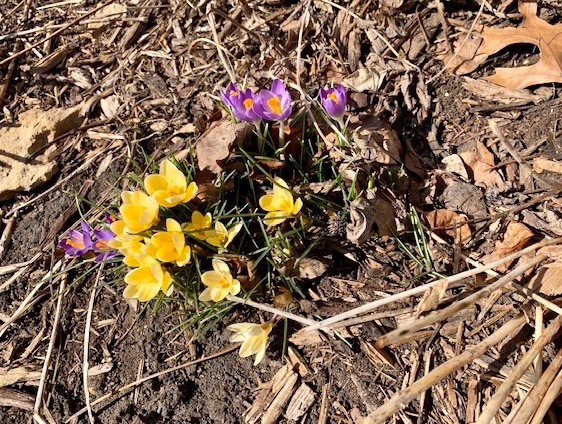 I should have been taking lots of photos during our beautiful, sunny weekend, but was too busy enjoying it all to pick up a camera. I’ll make up for it by adding a few more photos from Kenya. I’m going through them a little bit at a time (we had over 1,500 from the SLR and iPhone combined).

Here’s our tent at Sweetwaters Tent Camp. Yeah, not exactly roughing it. It’s quite cool at night there, and the hot water bottle they bring at night is much appreciated. But you have to be careful about securing the zippers, or the baboons will raid your tent. 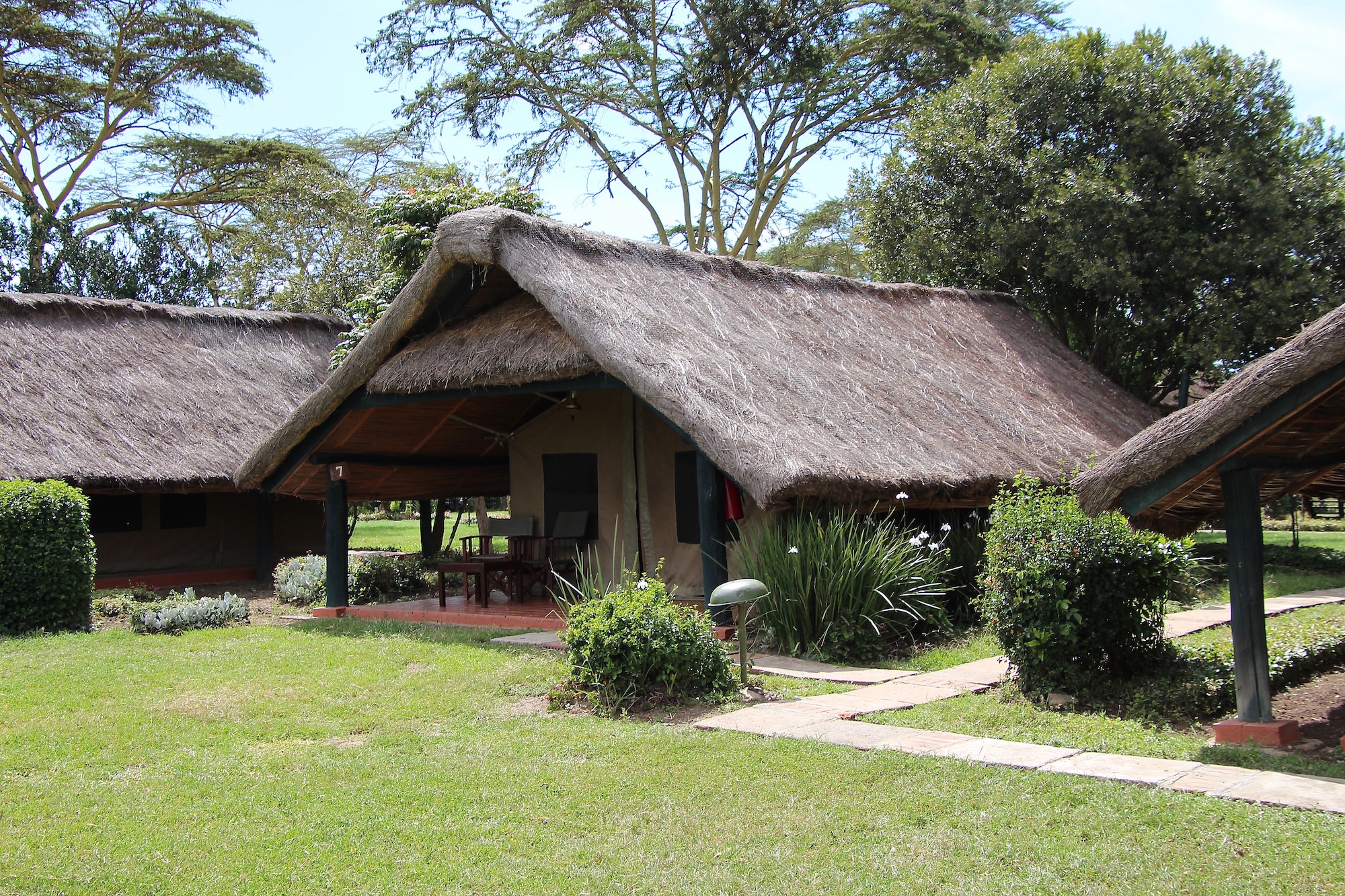 The tents overlook a water hole that attracts hundreds of animals, with nothing but a deep ditch (and carefully placed electric wires) between you and a vast array of animals. Here’s a scene taken from our porch: a Waterbuck (on the left), African Buffalo, Plains Zebra and Warthogs. 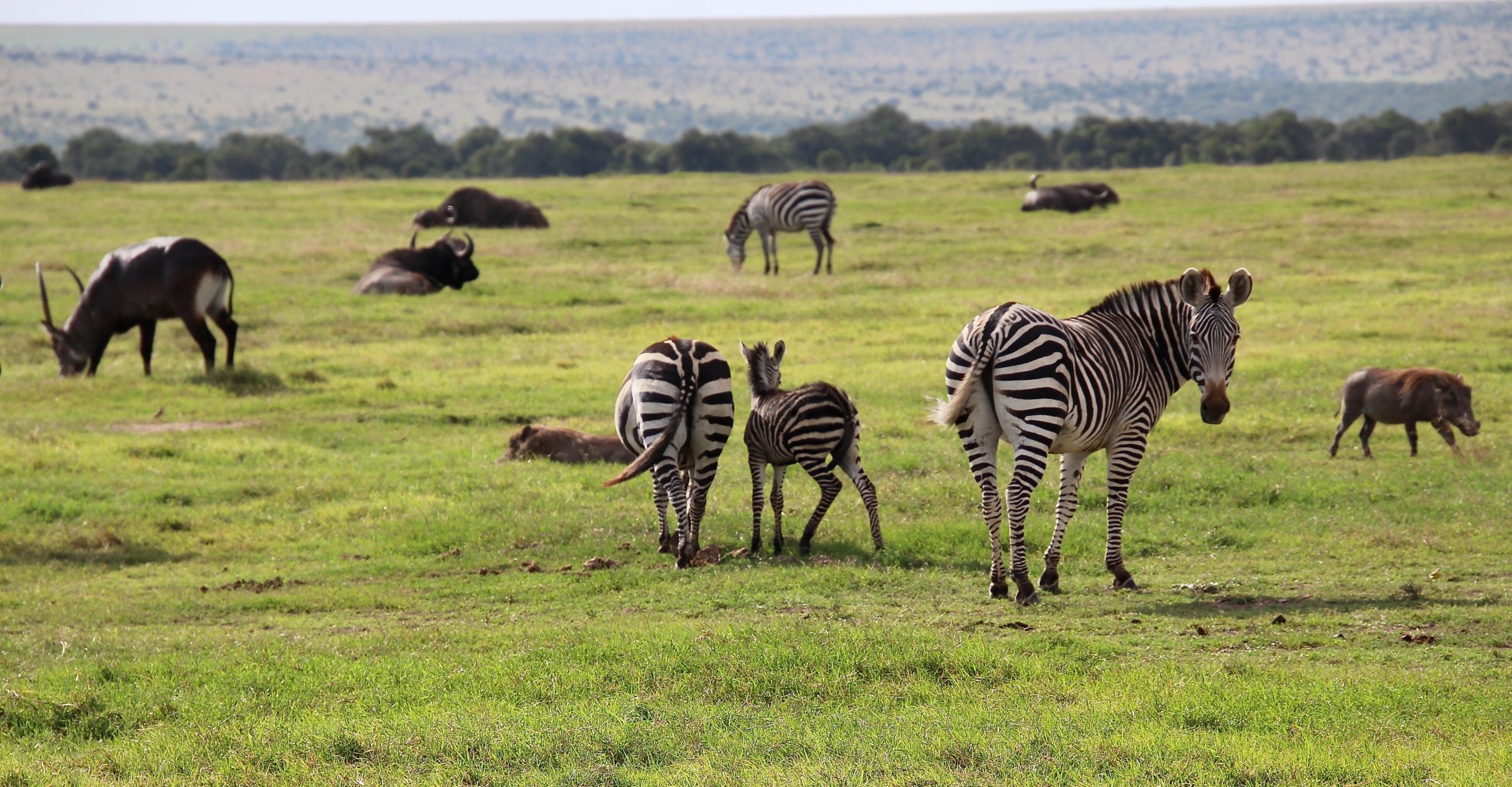 The camp is set in the Ol Pejeta Conservancy, a former cattle ranch now dedicated to preserving Africa’s native wild animals, including hosting a large number of black rhinos that are protected by rangers who risk their lives on a daily basis to protect the animals. We saw several mothers with young; so gratifying to see them thriving here. 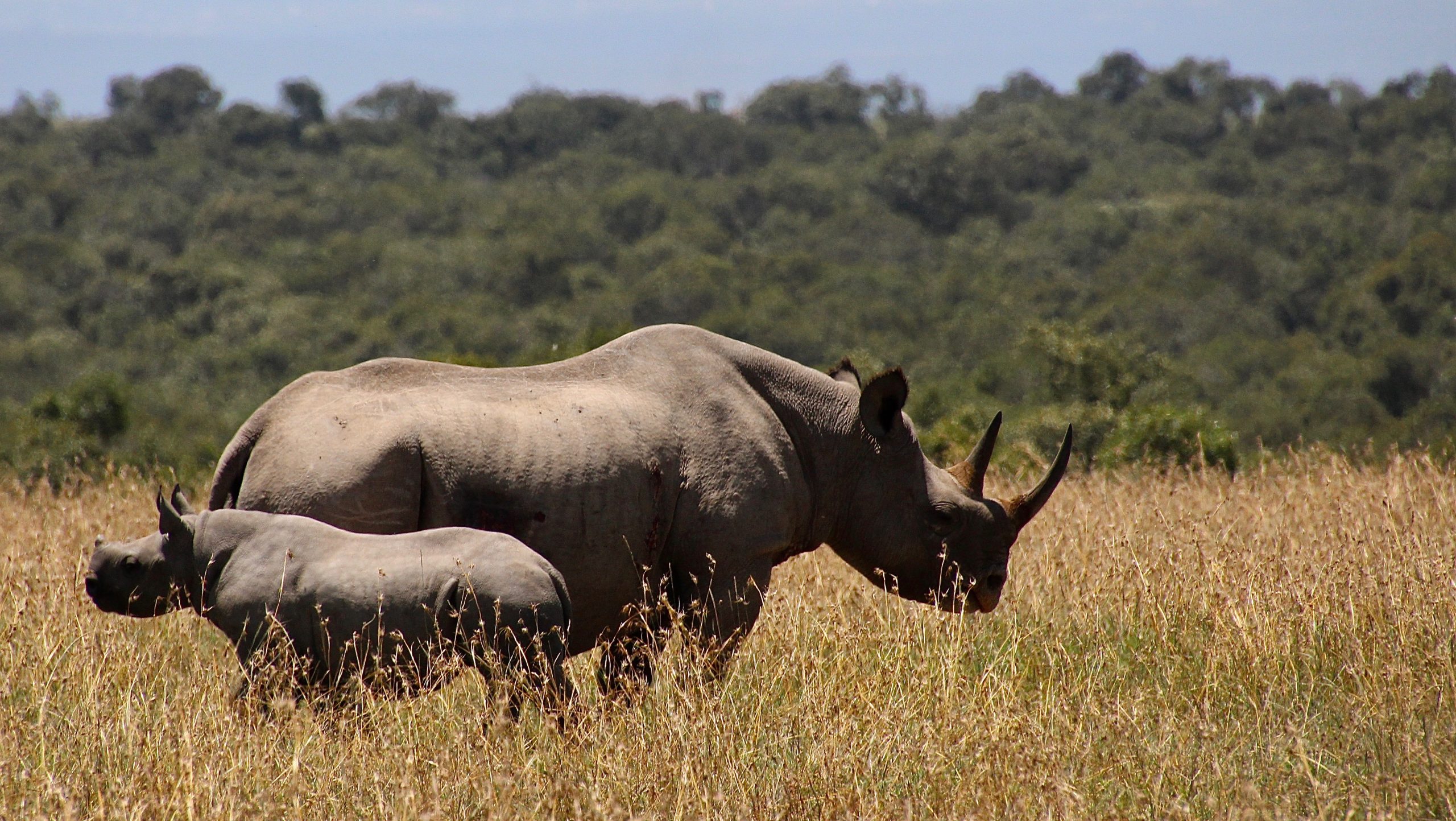 I could swamp you with photographs, but am afraid of wearing out Africa’s welcome. And besides, I really need to go train some dogs . . .

Here’s to a great week of training for us all!

« Hi. I’m Skip.
Thank Heavens We Have Dogs. (And Other Things To Do When The World Closes Up.) »