Welcome to an ongoing inquiry about the behavior of people and dogs.
Blog Home >> Animals and the People Who Love Them >> The Healing Look of Love?

Years ago I did a personal growth workshop (The Hoffman Process: Amazing!) in which we were asked to look into another person’s eyes for minutes at a time. Our “partner” was someone we had just met. At first it felt downright awkward, as you can imagine, but after a bit (30 seconds?), each of us began to feel a sense of overwhelming warmth and empathy for someone who was essentially a stranger. 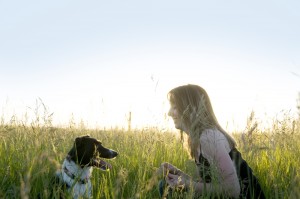 “Mutual gazing,” as it is called, is a well-known social phenomenon which acts to bond mother to child, and partner to partner in romantic relationships. Indeed, one can evaluate the level of maternal bonding by measuring the length of mutual gazing, and predict the amount of gazing based on maternal oxytocin levels. Gazing and oxytocin levels appear to exist in a “positive loop,” in which gazing increases oxytocin, and oxytocin increases gazing.

You know where I’m going here… We already know that something similar applies to gazes between people and their dogs. In 2009 I wrote about some interesting research from Nagasawa’s lab which found that oxytocin increases as gaze length between a person and a dog increases. They’ve followed up on this work by looking at oxytocin levels after “long” or “short” gazes in both people, dogs and wolves, and administering oxytocin to dogs to see if it increased gaze length. You can read a summary of the work in the New York Times.

The primary findings were that 1) oxytocin increased in both people and dogs who engaged in “long gazes” with one another and showed high levels of touching, 2) that was not true of interactions between people and their hand-reared wolves, or even people and dogs in the “short gaze” category, and 3) spraying oxytocin into the noses of female dogs increased the amount of time they made prolonged eye contact with their owners, but that was not true for male dogs.

None of us are surprised about the results with wolves, given that we already know that wolves look to and at humans at much lower rates than domestic dogs.  However, it is especially interesting that although gazing and touch correlated with oxytocin levels, the duration of gazing appeared to be the factor that drove the increase in oxytocin, not touch. I would have guessed the opposite. It’s also interesting that only 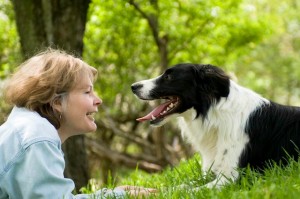 female dogs increased gaze time after the application of nasal oxytocin, not males. The NYT article suggests that male “vigilance” might account for this result, but I wondered if it might have more to do with higher baseline levels of oxytocin in female mammals. A close read of the published article in Science suggests just that: That either females are more sensitive to exogenous oxytocin, or perhaps other physiological differences between males and females might apply.

The timing of the news article was serendipitous, because it came out just as I was leaving for a two-day workshop at the National Institute of Child Health and Development on Animal Assisted Interventions (often called Animal Assisted Therapy) but AAI includes both focused therapy and more casual interactions like hospital visits) and Special Populations, or people suffering from PTSD, Autism or ADHD). It was a fascinating two days, in which we focused on state-of-the-artresearch on AAI –what do we know now, and what’s needed in the future? Particularly relevant to this article was a talk by Dr. Andrea Beetz, about possible mechanisms which would explain the therapeutic effects of AAI. She reviewed the literature that has found that oxytocin, in the right dosage, can increase the sense of well-being, increase social interactions, elevate mood, decrease the perception of pain, etc. etc. No wonder it’s my favorite drug.

But she also discussed Attachment Theory, Biophilia (ie, Wilson’s hypothesis that humans have an innate love of animals and nature itself), that animals focus attention (and thus might help people w/ ADHD) and distract people from pain and the feelings of fear. There was lots more to her talk, and several other excellent talks summarizing positive effects of equine and canine AAI for children on the Austism spectrum and those with ADHD.

Here is perhaps the most important set of questions that emerged from the workshop: What is it about animals that creates these positive effects (and increase in oxytocin)? Could you replicate it without real animals? (I myself feel a generalized resistance to that, but think about it: What if you could get the same effect with stuffed 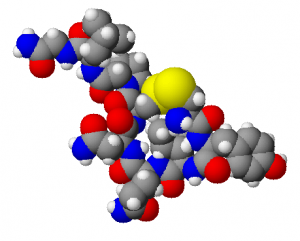 animals and provide this help to far more patients?) What is the minimum “effective dose?” What conditions are most helped with AAI? Beetz suggested that conditions that involve “insecure attachment” (trust issues in people with PTSD for example) and those needing help concentrating, dealing with pain, social stress or fear. Lots of questions to be asked and answered; it’s inspiring that so many great people are working on it.

My question for you, based on the work published in Science: Do you engage in long “mutual gazing” sessions with your dog? I would guess that it varies greatly, from person to person, from dog to dog. I look into my dog’s eyes a lot, but I have to admit I doubt that it lasts 100 seconds at a time. My dogs often look at me for long periods, but I’ve always thought they were looking for information about what I’m about to do next or where the next dog treat is coming from. You? I’d love to hear your thoughts!

MEANWHILE back on the farm: Eeeps! Crazy busy. I was gone almost a week, first to Toronto and then to Washington D.C. for the NICHD workshop. Meanwhile, spring is busting out all over, tons of gardening to do, and lambs due any minute. Lady Baa Baa is driving me crazy, I was sure she’d have her lambs last night at the latest. Dogs need lots of work on sheep, house is a mess, company coming, 100 papers to grade… you get the idea.

But I’m making myself take time to smell the flowers. Or enjoy them, as I did these cherry blossoms outside of D.C. last week. I loved the contrast of the soft, frilly flowers and the hard, shiny lines of the building in the background. 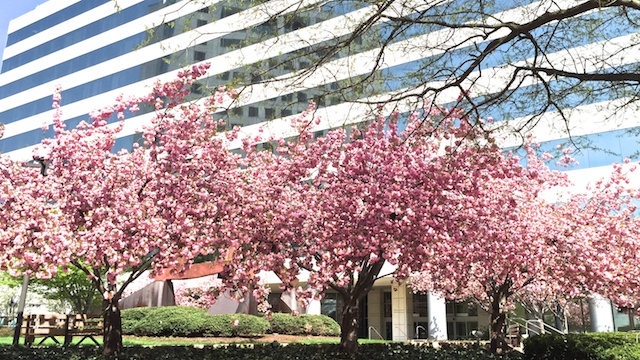 We’re not so far along with spring here in Wisconsin, but Polly enjoyed the weather this weekend, perched on a post overlooking the orchard pasture. 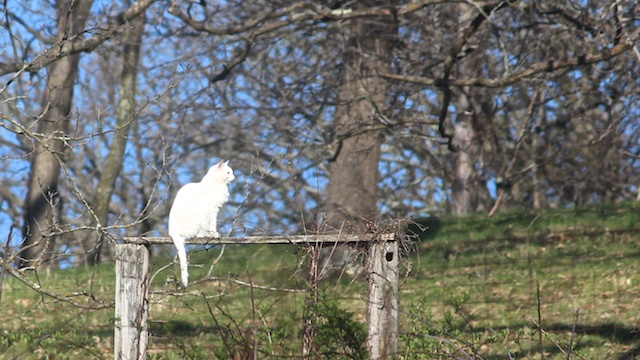