Welcome to an ongoing inquiry about the behavior of people and dogs.
Blog Home >> Animals and the People Who Love Them >> The Human-Animal Bond Includes Wasps

What do you think of when you hear the phrase “human-animal bond”? I suspect, for most of us, our first thought is our relationship with our dogs.  Which makes sense, given the depth of our connection with the animals that we have taken into our home and hearts like no other. However, Philip Tedeschi, Director of the Institute for Human-Animal Connection, and MSSW, reminded us in a speech yesterday that our connection with “other” animals goes beyond that of our companion animals.

Philip co-authored a chapter in Ignoring Nature No More, The Case for Compassionate Conservation, edited by Mark Bekoff, titled “Conservation Social Work: The Interconnectedness of Biodiversity Health and Human Resilience”. Yesterday, in a speech directed toward social workers in Madison, WI, he eloquently made the case that social workers have every reason to worry about the health of our environment, in part because ecological problems always hit the poor hardest. Equally important is the need to facilitate empathy and respect for all life. Philip argues that we have a “broken relationship” with nature, and that we need to find ways to build human-animal relationships among people in all cultures and economic levels. Doing so can have profound effects on efforts to reduce domestic violence, human aggression and animal abuse. 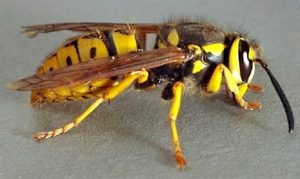 I couldn’t agree more. However, the fact that I was sitting in the audience worried sick about my husband and dogs who had been attacked by wasps lent an unwelcome irony to his message. Jim called me as I entered the conference room to say that he had riled up a nest of ground wasps while feeding the sheep. This species, the Eastern yellowjacket (Vespula maculifrons), is particularly aggressive if you get anywhere near their nest. The BCs were with him, and a posse of wasps chased all three of them into the house, a good 75 yards away. At least 10 wasps got into the house (probably on the fur of the dogs, they seem to get tangled up in dog fur). Jim was stung five times and Willie re-injured his bad leg in the scramble. This was bad enough; wasp stings are shockingly painful. But Jim is super sensitive to wasp stings and we have an epi-pen in the cabinet just in case. So I was worried (good news: Jim is okay thanks to Benadryl®), but also very much aware that our relationship with other animals can be a bit complicated.

The irony of this did not escape me while I sat listening to Tedeschi’s excellent talk. However, negative encounters with animals do little to dampen my belief in the importance of teaching children and encouraging adults from all walks of life to interact with the natural world. The evidence is overwhelming that time “in nature” is essential to true physical and psychological health, and no group needs that more than our children. The best summaries of the research on this topic are Richard Louv’s books, Last Child in the Woods, and The Nature Principle. I always feel a need to remind us all that being “in nature” isn’t always all sweetness and light. Finding a dead lamb in the barn motivated me to write Why I Farm, in which I said:

[Living in the country] . . . helps me to feel centered, with the earth holding me up and the land surrounding me, with something bigger and better than my own little life. 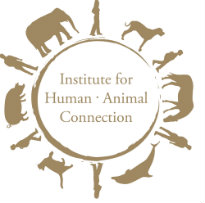 Of course, interactions with dogs are often the easiest and most readily available way to add animal life into someone’s nature-starved world. The work of Philip’s Institute toward that end is staggeringly ambitious. The Institute for Human-Animal Connection trains social workers (and their dogs) to do animal-assisted social work as well-educated professionals who have the knowledge and skill to do it well. But the people at the Institute do much more: The Institute has just signed a contract with the city of Denver to work with the homeless who have pets. It will work with the Warrior Canine Connection, which is moving to Denver, to study the use of animal-assisted therapy in the treatment of military trauma. Phil goes to Africa and works on programs to help farmers protect their crops from elephants while protecting the elephants at the same time. He and colleagues just finished a study on children exposed to animal cruelty and domestic violence. They are working in Romania, where dogs can be subjected to institutionalized violence en masse, to try to show the links between this kind of violence and the effects it has on children. They are involved in prison programs  and global conservation concerns. Whew. Inspiring.

Listening to this led me to ask: What am I doing? I would like to think that my writings have encouraged a love and respect for all of nature, but yesterday I felt inspired to ask what else I could do. I might have an answer: The registration fees for the talk yesterday were donated to WiscCares, a joint effort of the School of Social Work at UW-Madison and the School of Veterinary Medicine, to provide health care and advocacy for homeless pet owners. It’s an effort dear to my heart and an effort I might be able to assist.  (Remember I have ‘social work in my bones, I worked with “troubled adolescents” for two years in Alaska in another life.)

I hope you are in a place where you can either add an effort to connect people in need with nature, or find a way to receive it if that’s what you need yourself. Or both. I write this with a tinge of apology, having sprayed the wasp nest into oblivion last night. I won’t pretend that I regret killing the wasps. Their nest was in a place that none of us could avoid, and I draw the line at putting my loved ones at risk. However, I have to admit that I said, and meant, I’m sorry, as I did it.

MEANWHILE, back on the farm: Is there anything better than looking at a barn loft full of a winter’s worth of hay? We unloaded, with the help of the Zwettler family, about 5 tons of hay on Saturday, and boy does it feel good. I’m still enough of a wannabe farm geek to think it’s exciting and wonderful to unload and stack hay bales in the barn. My friends who grew up on farms tell me this is not an emotion that they share. And understandably so–hay is usually cut and delivered on the hottest and most humid day of the year. The chaff flies into your sweaty face, the alfalfa stems scratch your arms and your back thinks it has better things to do after the first 50 bales. But for a girl who grew up in the suburbs of Tucson and Phoenix, it still feels special.

Here’s what it looks like outside the barn. The “chute” that moves the bales into the barn is called an elevator. Getting the bales out of the wagon onto the elevator is harder than it looks–when the hay is cut and eventually baled, the bales fly into the wagon from the baler, land with a lot of force and are smashed together. It’s actually great fun to figure out what bale to pull to undo the pile. Pick-up Sticks with hay. I always did love physics. 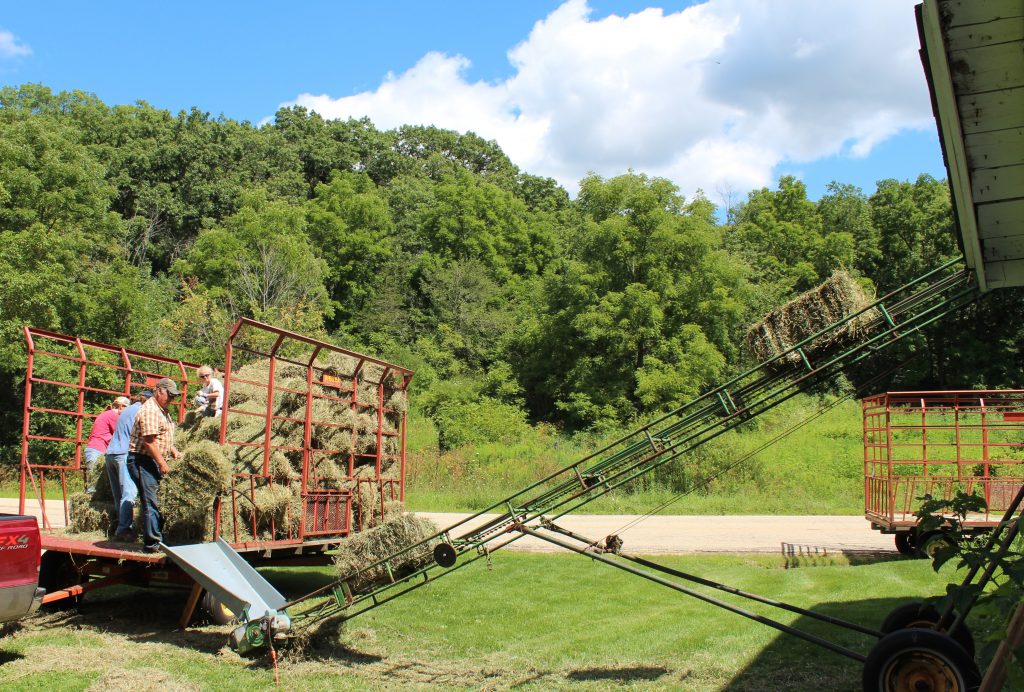 Jim gets the credit for all the photos. My favorites are the ones from inside the loft. Guy and young Garrison did much of the stacking, which takes more experience and attention than you might think. 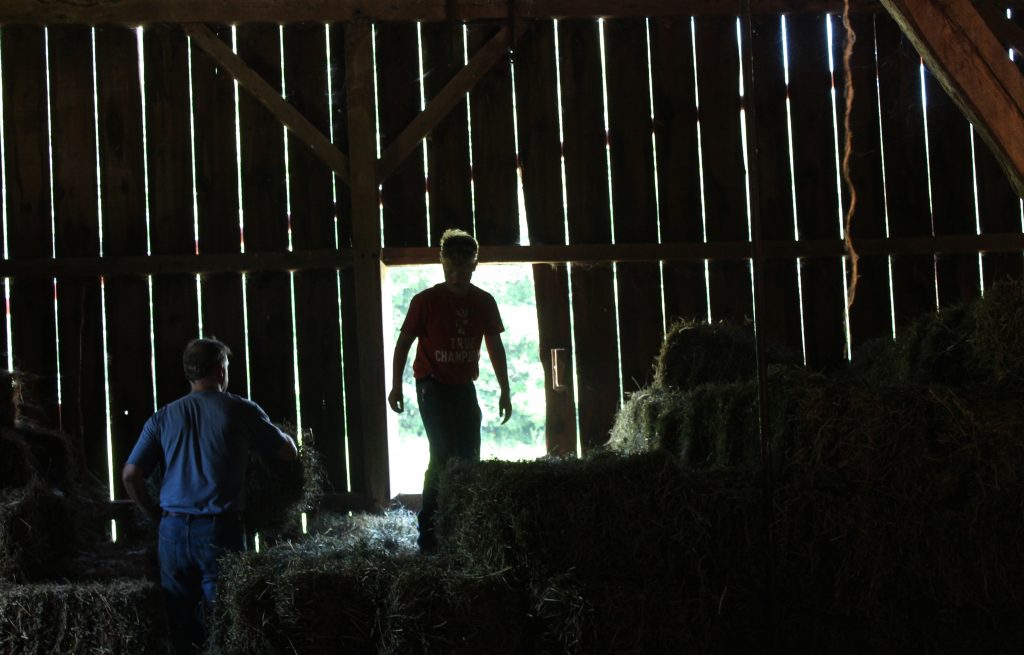 This is my favorite photo of them all. Love the light. 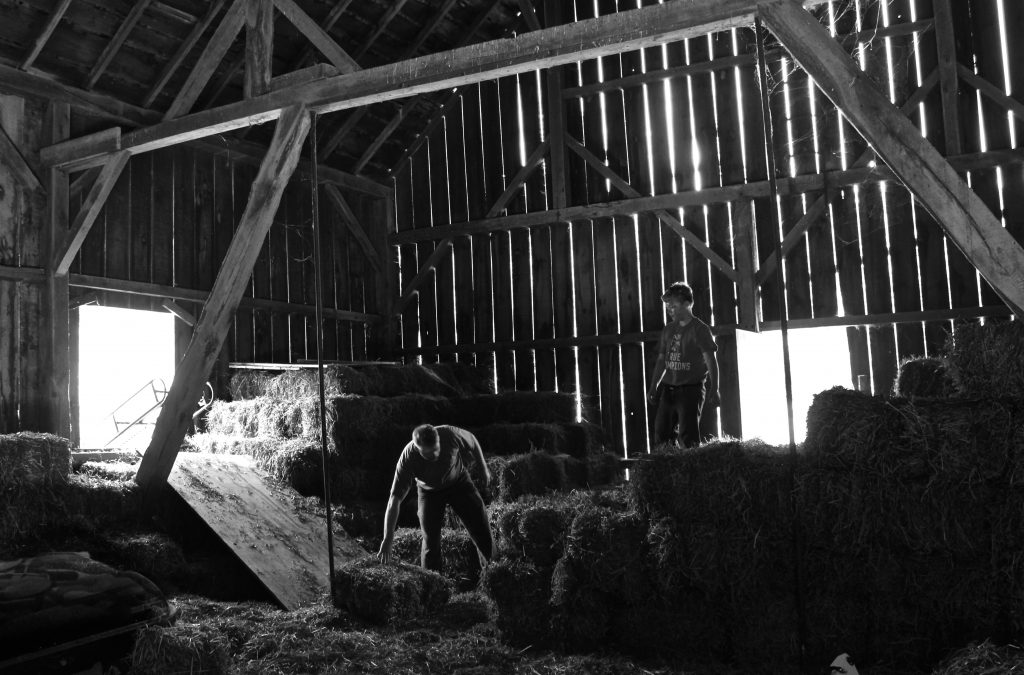 Unloading the hay is a summer ritual that I will always cherish. It includes hard work, laughter, ice tea & lemonade, and whatever I was in the mood to bake for a break (brownies this time). The only parts that aren’t quite so fun include my eyes that night (yeah, I’m allergic to hay) and my back the next morning. But all that is in the past, and the bales of hay smell devine as they sit in the loft, ready for the hungry mouths of sheep once winter comes.

« What is a Dog? & Dawn of the Dog: Book Reviews
Conditioning a Dog to a Muzzle »