Welcome to an ongoing inquiry about the behavior of people and dogs.
Blog Home >> Animals >> The mystery of play

I’m deep in “speech preparation” tunnel, working sun up to sun down on my presentations about play at APDT next week. It’s a lot of work, but gratifying. Play is such an interesting topic, I wish I could spend a few months doing nothing but learning, thinking and writing about it. One of the most interesting things about play is its reason for being is a bit of a mystery. Why do animals play? The answer seems like it should be obvious, but the more you think about it, the less you know. Is it for ‘practice?’ That makes sense, since play is seen mostly in young animals who are physically developing. However, some of the research suggests that practice is not the primary force driving play… (in some studies animals kept from playing are equally adept at predation and fighting.) Another idea proposed historically was that animals played if they had “excess energy.” It’s certainly true that play is only found in individuals who are healthy and safe enough to have the luxury of playing, but there is no data that suggests that ‘excess energy’ somehow needs to be used up!

One current hypothesis is that play allows animals to train their bodies for the ‘unexpected.’ Play usually includes many actions that involve quick responses and exaggerations of movements seen in other contexts, etc, so this hypothesis has some favor now. Perhaps there are several reasons that animals play… surely there doesn’t have to be only one reason.

But there DOES have to be a reason that play is so common in some species (“it’s fun” isn’t enough! why is it fun?). Play is costly and dangerous, (just look at all the sports medicine clinics out there!) so there has to be a big evolutionary pay off.

Another condundrum that scientists face when studying play is defining it in a way that uniquely defines a behavior as play. This is a tricky one, because most of the actions of play are seen in other contexts, like fighting and predation, for example. Certainly there are times that it is overwhelmingly clear that animals, our dogs for example, are playing. However, sometimes it’s not so clear. I have had several clients who were relatively new to dogs who called me out for a “dog fight” that turned out to be completely appropriate play between two dogs having a great time. On the other hand, how many of us have been at a dog park and listened to someone say her dog is “just playing” when it’s clear the dog in question is a bully who has terrified all the other dogs at the park?

Here’s a question for you about the photo below, sent by someone I met at a seminar (thank you!) Are these dogs playing or fighting? If you feel sure you know.. how? What is it that caused you to decide? 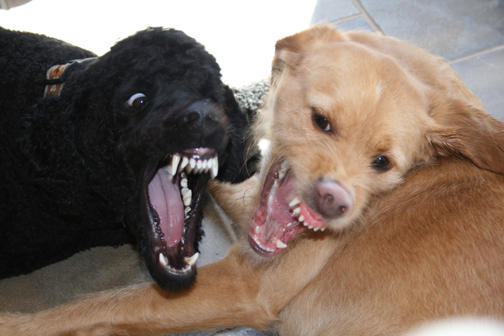 « Scientific American Mind and Your Dog
Play in People and Dogs 2, Fall at the Farm »