Welcome to an ongoing inquiry about the behavior of people and dogs.
Blog Home >> Animals and the People Who Love Them >> The Nail Wars

Poor dogs. Some of us think getting a manicure is akin to heaven, but for dogs, getting their nails done is more often like going to hell. I was thinking about this last night while I was working with Willie on nails that grow extra long and extra fast because of his restricted exercise. I just switched him over to a “grinder” (Oster Grinder or Dremel, mine is an Oster) and asked myself this question: “What took me so long?” I used the Oster on both Pippy Tay and Lassie for years and with great success, but was a tad lazy about conditioning Willie to it until now. Although I’ve only cut into the quick of one of his nails one time, (and then not badly — but still, I hate it when that happens) and have used buckets of treats while trimming his nails, Willie clearly hated having his nails trimmed and seemed to more and more as the years went on.

Over the years I’ve clipped a gazillion nails, and worked with hundreds of clients whose dogs objected to having their nails trimmed. I thought it’d be interesting to share some thoughts and to hear about your experiences. Nail trimming may seem like a trivial subject, but given Lassie’s face when I used to use clippers on her (“I’M DYING!”) and the clients who were bitten by their dogs when they tried, it’s actually pretty important.

Here’s why I think some dogs get worse with a clipper: the “click” of clippers actually makes things worse for some dogs. I first wondered about this when several clients told me that their dogs hated having their nails trimmed until they went deaf, and then didn’t care. Wow. Really? But I noticed the same thing with Pippy Tay; starting around the age of 15 years, about when her hearing started to go. When she was younger, Pippy was never aggressive about nail trims, she just acted as though having her nails done was a nightmare beyond belief. Oh yes, it was easily managed and we got through it fine, but Pippy clearly found it extremely aversive, even with the best conditioning and tons of treats. Once I switched to the grinder she completely relaxed, and would lie on her side as if being massaged when  I’d say, “Let’s go to the spa!” She’d lie down and practically raise a paw. It was all I could do to not ask her to select her color and pay up before I finished the manicure.

Lassie never liked having her nails done, but appeared to be much less stressed with the grinder than the clippers. Luke and Tulip didn’t seem to mind much, so I clipped their nails because it’s faster and easier, but the device was a godsend for both Pippy and Lassie. Willie didn’t mind his nails being done at first, but after I cut into the quick once he seemed to hate it. He’d tense up as if expected doom, and flinch each time the clippers made their ‘clipping’ sound. That, and my client’s dogs, got me to thinking: Could the click of a clippers condition dogs to expect something aversive as easily as something good as in Clicker Training? Why not?  After all a ‘click’ is extremely effective at getting a dog’s attention. A clicking sound has an instant onset, abrupt escalation from no power to full power, and a full range of frequencies  (the better to light up more acoustic receptor neurons), and few sounds are better at getting at becoming meaningful to a mammal.

As I mentioned, I’ve switched Willie to a grinder and I like the way it’s going. Is he still thrilled with getting his nails done? No. I suspect part of this is because he already has some arthritis in his paws (my vet says: “What Border Collie doesn’t, the way they short stop through life?”) and it hurts to have his paws handled. So I’m very, very gentle with his paws and nails.  But he’ll lie on his side quietly, let me hold his paw and do one paw at a time now before he gets a treat, and he doesn’t get up as if panicked.

Here are a few things I’ve learned about using the Oster. Be forewarned, I’m not a groomer, so groomers please, please jump in here!

1. Obviously, start slowly. First I sat down with a bowl of treats on one side, Willie lying in front of me and the grinder in the other. Holding it behind my back, I’d turn it on, give Willie a treat, turn it off. Repeat about 10 times. That was Session One. Session Two was moving the device toward Willie, as he got the treat, eventually holding a paw and moving the grinder to within an inch of a nail. In Session Three I ground 2 nails down just at tiny bit, giving him a treat between ‘grinds'(would have given them during but needed 3 hands). Then we did some more ‘Turn grinder on, Give Treat” with no contact. In session Four I trimmed an entire paw, although again only doing about half of what needed to be done. In Session Five I tried to do two paws, with lots of treat between, but that was too much. He scrambled to get up once I started on paw # 2, looking all panicky. I gently restrained him so that I could end the session rather than he, but touched the Oster to one nail, gave him 5 treats and then let him up. The next session I did paw, took a break and did one more nail… and that’s where we are now.

2. Be sure that the grinder spins in the direction of the nail growth, not against it. You can figure this out easily just by touching it to the nail. If it spins in the other direction it pushes the nail back into the bed and it clearly is uncomfortable for the dog. It almost bounces off the nail. If I hold my device in my right hand and move it away from the dog’s paw it seems to be best.

3. Watch out for hair, yours or your dog’s, getting caught in the rotating head. If that happens, it instantly winds up around the base of the area with the grinder on it. Not good. Although my Oster is an electric one (you can get battery operated ones too), when this happened when I first started using it shut itself off (or did I just turn it off instantly? Eeeps, not sure now!) and it never hurt anyone, but it did surprise Lassie and I a few times. Basically you need to be ever alert about keeping hair away from the rotating head. Once you get used to it it’s easy to do, but you do need to pay attention!

4. Just as in clipping, don’t take too much off at a time. One advantage of a grinder is that it is much harder to cut into the quick… you can see exactly how close you are getting, even on dogs with black nails.

5. Keep supplies handy. I’ve kept the grinder out for the last week. My plan, and the one I used with Lassie and Pippy, is to keep it out for a week, work a little bit at a time on each paw each day, then put it away for a few weeks. I’m much more likely to keep after their nails if I can see the Oster right in front of me. Of course, that means that my living room now looks like a gym/grooming shop, what with Willie’s exercise ball, his wooden poles and holders for stepping over, a ‘step-up’ exercise step, a grinder on the rocker… but Jim doesn’t complain and it makes life easier for me right now.

6. Never forget the always handy “Take your dog to the groomer or vet to get his/her nails clipped” option. For me that’s just more time and expense, so I don’t use that option, but it’s a great one if you are having trouble AND if you know a groomer who you totally trust.

Groomers? I’d love to hear your comments about nail trimming. I know some dog lovers on Facebook mentioned that your dogs love having their nails done. That’s fantastic, good for you. If your dog doesn’t, don’t feel guilty. Remember that Pippy learned to love her manicures, Lassie endured them. Each dog is different and will react differently to the exact same methods. There are also at least two brands out there for medium size dogs: Oster grinders and Dremel. (I thought dremel was actually the name of the tool, but it turns out it is a brand name. See, I told you I’m not a groomer.) Any comments from groomers about which brand they like best?

MEANWHILE, back on the farm: Still gorgeous weather, and the Goldenrod and Joe Pye weed are flashing plumes of yellow and pink  all around. We’re busy busy at the farm, finishing up a garage clean up and getting ready for Scotland. I had a root canal go bad on me last week, so much of late last week was spent in first a pain-induced and later a Vicodin-induced haze (the latter preferable to the former), so I missed several days of work. (That’s why this blog is tardy. My apologies. A Vicodin powered blog would have been interesting, but perhaps not professionally wise of me. I suspect it would have made the subject of nail trimming especially interesting. I am happy to say that my brain appears to be up and running and I no longer look like a chipmunk with a wad of nuts in her cheek.)

Willie is doing well, I’m just floored at how good he’s been since February.. FEBRUARY! when he was first injured. I just can’t believe what a good boy he’s been, we are so lucky. And in less than a month he can be off leash! Oooooooo, I can barely wait. He’ll be in twice a week for treadmill work until we get back, and then, the Hobbles go on and the leash goes off. EEEEE Hah!

Here’s an unidentified insect (any entomologists out there?) on the Joe Pye weed. This one and several bees were there early this morning, all immobile, presumably from the temperature being too cold for them to be able to move. Were they there all night? Did they miss the boat back to the nest so’s to speak, forgetting to fly away before the temperature went down? (All are up and busy now by the way, I just checked.) I know much of the US is either boiling hot or reeling from wind and water… hope you and yours are safe and comfortable. 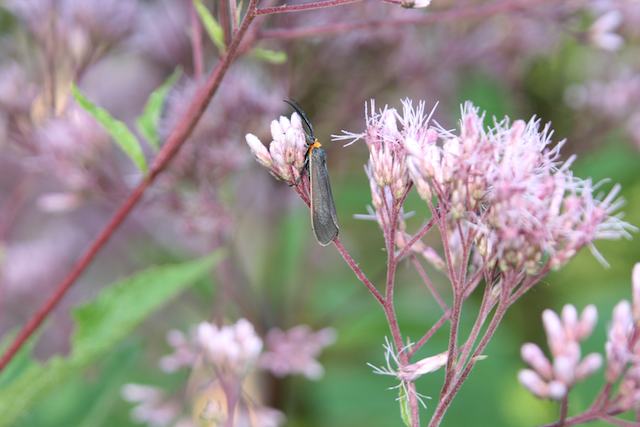