Welcome to an ongoing inquiry about the behavior of people and dogs.
Blog Home >> Dog Behavior >> The Plot Thickens: Spay Neuter Effects & the Health of Our Dogs

Many years ago, in the 1980’s, I was in Scotland being introduced to a cocktail party full of veterinarians. Imagine my surprise when one of them cornered me, waving his drink and spluttering his words, and began berating American veterinarians for promoting spay/neuters of pet dogs. Several others joined in, and before I knew it I began waving my own drink and spluttering my own words, in defense of my dog’s vet, as well as many colleagues and friends. For all I know I threw apple pie in there somewhere. Their point was that it is not good medicine to remove vital organs, which have many functions beyond reproduction, in order to prevent something that may or may not happen (mammary cancer, pyometra for example).

That was my first introduction, a long, long time ago, to the fact that not all health care professionals believe that spaying and neutering young dogs is in their best interest. This controversy, heard often when I traveled in Europe and rumbling at a low level in the US, didn’t reach critical mass here in the States until research began surfacing that questioned the side effects of these procedures. One recent study, on 759 Golden Retrievers by Torres de la Riva et al at UC-Davis, found that males neutered before the age of 12 months were twice as likely to suffer from hip dysplasia, and that three times more early-neutered males suffered from lymphosarcoma than intact males. On the other hand, late-neutered (after 12 months) females suffered from hemangiosarcoma four times more than intact or early-neutered females. In either case, intact dogs came out better than those that had been neutered (I’ll use that term for the removal of reproductive tissue in both males and females).

However, another study just came out by Hoffman, Creevy and Promislow, that found a correlation between reproductive sterilization and a longer life span when neutered dogs were compared to intact dogs. In part, that increased longevity was associated with a decreased risk of death from infectious diseases and trauma. However, they also found that neutering was correlated with an increased risk of death from cancer. The plot thickens, especially after a study published in 2oo9 by Waters found that female Rottweilers neutered after the age of four were more likely to achieve “exceptional longevity” than females neutered at an earlier age.

Is your head spinning yet? Whatever are we to make of these findings? Do they suggest that early (and in the case of shelters, “very early”) neutering of animals in shelters is a bad idea?  Should American pet owners forgo neutering their pet dogs in order to increase their life span or prevent joint and tissue injuries? My answer to these, and all related questions is “Whoa.” “Whoa” in that these studies have found correlations, not causal effects, and one can never be too careful about correlations. We’ve all heard the examples: “Breaking News! More murders are found in cities with a lot of traffic lights.” Next follow up story: “Traffic lights cause murder rates to go up.” The next iteration is: “Traffic lights kill people!” Of course, there are higher murder rates in cities with lots of traffic lights, because murder rates are higher in big cities, and big cities have more traffic lights. That might (I emphasize might) be what’s going on in some of the findings. For example, the study by Hoffman, Creevy and Promislow found that neutered dogs lived longer than intact ones, but how do we know that being neutered was what caused the dogs to live longer? We don’t, in spite of one author, Creevy, saying “I am very satisfied that our data show that animals that are sterilized live longer.” Well yes, I’d agree with that, but not that the former caused the latter. Perhaps neutered animals represent a different demographic, with different health care histories, different diets, different levels of health care, etc. The fact is, we just don’t know.

But… And… However… One doesn’t need to be a veterinarian or physiologist to suspect that removing hormone-producing organs has a profound effect on a body’s physiology, beyond that of eliminating the potential of reproduction. Natural selection is a conservative process, and it is rare for any hormone to play only one role in the body. Androgens produced in the testes play a role in muscle and skeletal development. Estrogens, we’re told, affect the urinary tract, the heart and blood vessels, bones, breasts, skin, hair, mucous membranes, pelvic muscles, and the brain. Thus it is reasonable to wonder what the effects truly are of neutering animals at young age, sometimes as young as a few months of age. We already know that extremely early neuters lead to more long bone growth in dogs, but what of other effects? What do we really know?

Chris Zink, a highly respected DVM who specializes in canine athletes, has argued for years that the evidence suggests we must reconsider neutering animals before they have fully developed. Her comprehensive review article on considerations about neutering, which deserves a lot of attention, ends with suggestions that I hope become part of our conversation about how to balance the benefits of neutering with the costs. One question worth discussion is: Why not vasectomize males? Yes, they will still be intact males, and might lift their legs more often, but breeders have had intact males for years that learn to be polite in the house. (I’d love feedback from those of you living in countries where dogs are not usually neutered but still expected to be polite social companions.) Some people believe that intact male dogs are more aggressive than neutered ones, but I’ve seen so many dog-dog aggressive, neutered male dogs I’m not convinced that is true.  My one-in-a-million dog, Luke, was intact, and was consistently gracious to virtually everyone he met, dogs and people too. Females, as always, are more complicated; Zink’s suggestion is to let them cycle at least twice before removing the uterus and ovaries.

Back, then, to the question I asked earlier? What do we really know? I’d argue that the recent research and the controversy it has generated has highlighted more about what we don’t know about the effects of neutering our pets than what we do. This is painful in one sense, because it makes life evermore complicated when faced with decisions about whether to neuter, and if so, when. But life is like that, science even more so, in that at some point, the more we learn, the less we know. I, for one, am thrilled that the topic has found a place at the table among dog enthusiasts and veterinary medicine.

I look forward to our conversation about this issue…. jump in!

MEANWHILE, back on the farm: Willie is still restricted because of his iliopsoas strain. We go back to the physical therapist on Monday, July lst. Paws crossed. The other news from the farm is first, The Weather. Good grief. Rain, rain, thunder, lightening, rain, thunder, rain, thunder…. you get the idea. The area had from 2-4 inches of rain fall in an hour a few days ago. It is supposed to dry up this weekend. I’m hoping. Best news is that our hay farmer got hay in during the short dry spell last week, so we have 440 bales of good hay coming on Saturday. Everyone out there with livestock knows exactly how good it feels to have the barn full of hay for the winter.

The other news is that 95 amazing, wonderful people came to a rocking barn party on Sunday night to celebrate my and Jim’s marriage. It was fun and sweet and silly and we will never forget it. Lots of family from all over the country came, which made it extra special. We actually had out of town company from Friday through Tuesday, and it was blissful. And then yesterday and today I recovered by finishing the best jigsaw puzzle EVER in the entire world. Bliss. Back to the office on Monday, getting ready for some super fun speeches in Chicago, IL and Boulder, CO.

Here’s Willie boy, on a sit-stay so I could take some flower photos. 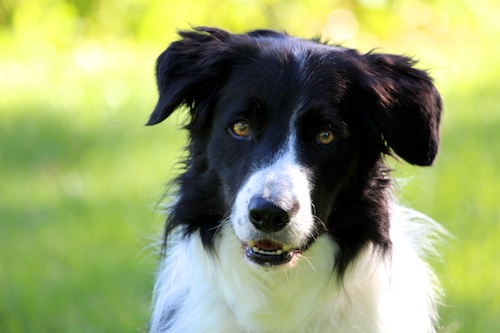 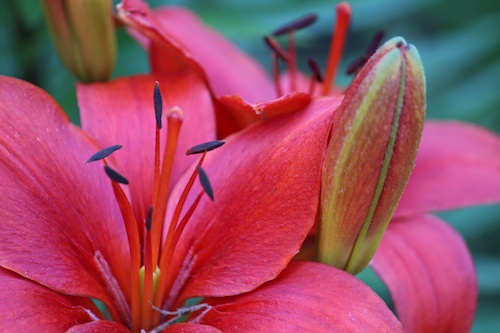