Welcome to an ongoing inquiry about the behavior of people and dogs.
Blog Home >> Dogs and Sound >> The Power of “Woof”

I didn’t know what it was at first. A large cat? A fox? The grey-brownish animal was trotting just outside the fence, looking inward toward the lambs, as Will and I stood looking at the flock in the high pasture one morning last week. As it came closer, I realized it was a coyote, a frequent visitor to the outskirts of the farm, but a rare sight in broad daylight, so close to my sheep.

Granted the lambs were no longer newborns, and granted some of the older ewes were capable of smashing a small canid into the dirt like bugs, but still, a coyote/lamb omelete is not something a shepherd wants to see. My guard dog long gone, I reflexively barked myself. (Will hadn’t noticed the coyote at that point, he was so focused on the sheep.) BARK BARK BARK, I said, trying to sound low and growly and oh-so-intimidating. The coyote stopped and looked at me for a moment, and continued its purposeful trotting along the fence. I changed tactics. WOOF WOOF WOOF I bellowed, and before the second note had left my mouth the predator pivoted and ran for the hills, its beautiful tail streaming high above the grasses.

It was the coyotes themselves who taught me to say WOOF.  Last year after Tulip had died a pack of them was rallying just yards from the barn and the damp, delicate lambs within it. We heard them yip-howling, sounding like happy banshees risen from the graveyard, and we dashed down the stairs and ran out onto the front lawn. In the past we would have run out with Tulip, who would  have been barking loud and low long before we got to the bottom of the stairs. Out she’d go on her tie out, where she’d roar out into the blackness, her voice echoing back from the hills beyond, and the coyotes would immediately go silent. One of us would stand there with her until long after, listening to the night, sleepy but thankful for her deep barks and her huge white presence.

But with Tulip buried practically under our feet, on the very spot she would stand and broadcast her presence, we were on our own. BARK BARK BARK we yelled, and the coyote chorus continued. For reasons I can’t explain, I jazz riffed my way from BARK BARK BARK to WOOF WOOF WOOF, and the cacophony immediately stopped. Nothing. Silence. I tried it again a few nights later, and again, BARK had no effect, while WOOF was a game stopper.

I told a friend who has two Great Pyrenees my story a few weeks later, bellowing out my BARK and my WOOF  at her home in the country as best I could to illustrate. My friend and her two dogs listened to my story . . . until I got to WOOF WOOF WOOF, and you guessed it, her 2 dogs immediately began to bark. Not only that, but each dog ran to a different area on the property where they typically bark at intruding animals (especially coyotes). One went left, one went right, and they each raised their beautiful white muzzles to the sky and barked like a stereo symphony. Their barks were loud and serious… they had to be loud for us to hear them, because my friend and I were laughing so hard, big-eyed and amazed, that we would have drowned out anything less than a full operatic performance.

Barking is such a huge topic, and surprisingly little studied for such an important behavior of the animals we live with most closely. We know that wolves bark, but rarely, and most often when they are adolescents. The message appears to be directed to two parties: one to the intruder (I see you!) and another to the pack itself (911: I need some assistance here!). Domestic dogs are veritable Chatty Cathy’s compared to wolves, which makes sense if you think of dogs as wolves who never grew up (called paedomorphic or neotonous). Surely we have also selected for barking; in many places in the world the primary purpose of  dogs is to be an early warning system for predators.

Barking itself is controversial (isn’t everything?). Some argue that barks lack any communicative value at all (these could not be people who own dogs, could they?), while others argue that barks vary by context and can be accurately used at minimum to assess the internal emotions of a dog, and at most to gain information about the environment (ie, what kind of predator is approaching?). For a great review of this literature, see Sophia Yin’s article in the Journal of Comparative Psychology (2002, Vol. 116, No. 2), “A New Perspective on Barking in Dogs.” Fedderson-Peterson, a researcher in Germany, agrees with Yin that barks can convey a tremendous amount of information. All (most?) agree that low, noisy barks  correlate with offensive & defensive threats (following the “universal principles of vocalizations” described by Morton many decades ago, with  lower pitched sounds correlating with an animal on offensive or about to be aggressive), while high-pitched, more harmonic barks correlate with fear or play or mild frustration.

So how does that fit with WOOF versus BARK? When I repeat the words and listen to myself, WOOF sounds a lot lower. It’s easier for me to say ‘woof’ in a low, deep voice than it is to say ‘bark.’ Could that be the reason it had more impact on the coyotes? Certainly, the words we use to symbolize canine vocalizations vary greatly, depending on the language. According to Wikipedia, people in Albania say “ham ham” while people in Iceland say “voff voff” to label a dog’s ‘bark.’ I find it interesting that for English, the article listed “woof,” “ruff” and “arf” for large dogs, and “yip,” and “yap” for small ones. Say those to yourself, and if you’re like me, you’ll say ‘woof a lot lower than you’ll say ‘yip.’ Larger animals inherently make lower sounds, which is believed to be one of the reasons that a deep, low bark is perceived as more threatening…. “I am BIG and I’m coming to get you…”

And here’s the beauty of the internet: This blog has about 16,000 readers now, from all over the world. So let’s hear it: what word do people use for “bark” in your native language?

MEANWHILE, back on the farm: Hope, at 12 weeks now, is doing beautifully on so many things. We’ve made huge strides on coming on when called (best reinforcement is running away from him, much better even than pieces of dried beef!), crate training, house training, sit and down on cue, puppy pauses, sitting down instead of chasing the cat (this one will take awhile!), and walking on leash. He is just as willing and biddable as his parents and the 7 older siblings I was able to hear all about (2 different litters, 3 yrs and 1 year of age). Of course, none of this is close to “done”.. he is only 12 weeks after all!

Hope and Will have more good moments than bad. They wrestle play and “tooth fence” in the house, and Will has lost his look of abject misery that he greeted with me every morning for a few days. Here they are now–look carefully and you’ll see the tiny, curved shark-like teeth in Hope’s open mouth. Last week he lept up and bit me on my . . . well, let’s just say I was facing forward, he jumped up above my waist, and it was quite a surprise. Good thing he’s learning bite inhibition from me and Willie both. 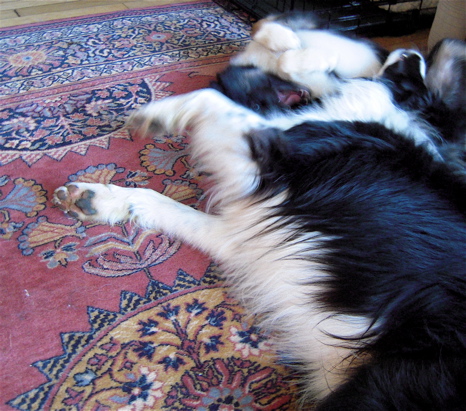 « Wow Willie, What a Good Dog
Come to New Zealand? »