Welcome to an ongoing inquiry about the behavior of people and dogs.
Blog Home >> Animals and the People Who Love Them >> The Premack Principle to the Rescue

New dogs always bring new challenges, and besides poor Skip’s leg injury, one of ours is his obsession with the cats. Frenzied Feline Focus Syndrome, or FFFS, (I do hope it’s clear I made that up) is common in Border Collies, some of who categorize cats as weird, mutated livestock creatures without hooves. Others don’t, and it seems to be hard wired. Maggie came into the house at 14 months, having not been exposed to cats either, and immediately became protective of the cats when Willie began stalking them. After being here just a few weeks, and having just recently become comfortable enough with Willie to be loose in the house with him, she darted between Willie and the Nellie, nose bumped Willie, and returned to sit beside Nellie like a body guard. They are best buddies to this day.

But Skip? Ah, no. He was mildly frightened of the cats the first few days, clearly never having seen one in his life. Then he was curious, and approached Nellie with his tail wagging. Oh good, I thought, he’s not going to be one of those dogs. And then he dipped into a stalking posture when she came over to rub against him. (Nellie, aka Golden Retriever Cat, has never met a stranger.) The snap didn’t appear to be defensive. It was the exact action you’d see a BC perform, appropriately, toward a sheep that faced him off. Measured. Controlled. But clear. “Get out of my face and move away.”

After that, Skip became obsessed with the cats. He goes into full stalking posture when he gets anywhere near one. He sits at the window and waits for one to appear in the garden. He’s lunged at the cats when they got close to him, and I’m pretty sure he would have bitten Nellie the time she dashed through my legs at the door to the house if she hadn’t had a cabinet to run under.

Needless to say, this is something I’ve been working on ever since we got him. I’ve done all the obvious, including keeping Skip and the cats as separate as possible. (Sorry Nellie about only coming in the house when Skip’s crated, but please remember I’m allergic to cats and you’re not supposed to be here at all. Just saying.) I taught Skip “Look” (at me), first with no distractions, and then gradually worked up to using it around the cats. The goal was to teach him to automatically look at me when he saw a cat. In addition, I began teaching him to go to a “station,” (a rug in the kitchen), first with no distractions, then with moderate ones. We’ve worked hard on “Stand,” which means stop and stand still until released, which has prevented no small number of dangerous chases when Nellie decides to come on walks with us.

All well and good. Cooked chicken as reinforcement is a wonderful thing. Lots of success. Except for the Nellie factor.  She is not enrolled in the “gradually push the envelope of the dog’s threshold” concept. In spite of clear evidence that Skip might do her harm, Nellie insists on walking up to us when we are outside. Skip is on a leash now because of his injury, but I need to be able to, at minimum, call him away from her when she gets too close. Skip will respond well to “Look” or “Stand” if she’s ten or twenty feet away, but not if she is closer. It is irrelevant if I have chicken in my hand or not. 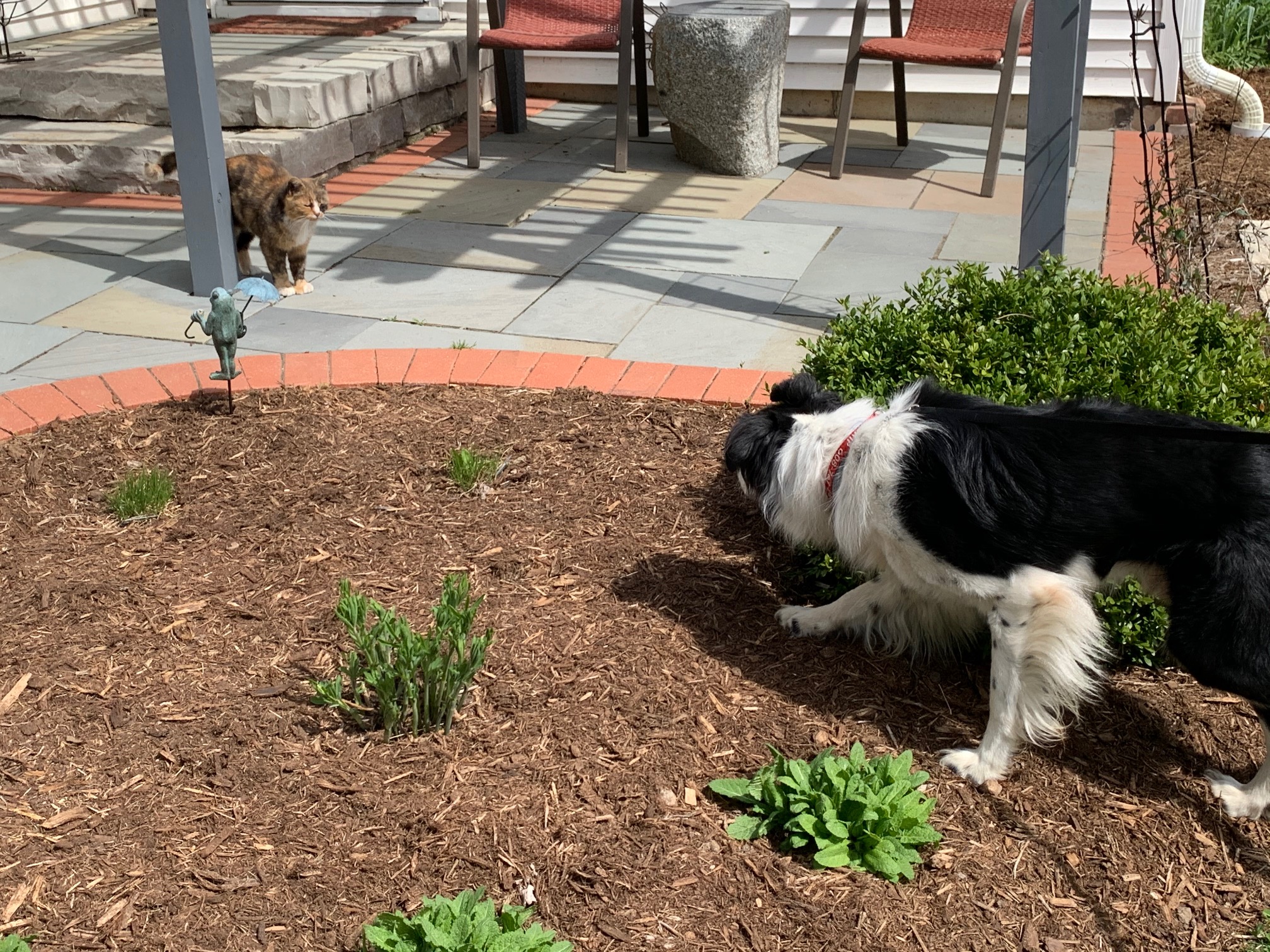 That’s when Premack’s Principle came to the rescue. Skip also knows “House,” which simply means “go into the house.” A few weeks ago, when Nellie was insistent on getting within tooth range, I threw out a stream of “Looks” and “Skip Skips” (recall), held out a hand full of treats, and got nothing. Not an ear twitch. Just a freight train of a Border Collie in full-out stalking posture, body rigid, mouth tight. I don’t know why I then said “House,” but I did, and Skip pivoted like a gymnast and trotted toward the door to the house.

Here’s an example that we recorded this morning:

Skip continued happily trotting into the house after Jim stopped taping, even walking past Polly, napping at head level on a chair by the door.

Whaaaaa? Great treats were not enough of a reinforcement to motivate Skip to change his behavior, but going into the house was? That made no sense, until I realized that, once inside, he ran to the window to get a glimpse of the cats from that angle. Ah ha! That is Skip’s “most probable” behavior. Remember Premack’s principle, in which “an opportunity to engage in more probable behaviors will reinforce less probable behaviors?” I’m always forgetting Premack’s name (sorry sir), and so think of it as the “probability principle”.  Another way to think of it is: What behavior can you guarantee your dog will do if given the chance? That’s what he or she really, really wants to do, so that’s what is most reinforcing.

Here is Skip doing his most probable thing in the living room if the curtains are open: Waiting for a cat to appear. (By the way, the grey collar is his Seresto flea and tick collar, we live in Lyme Central.) 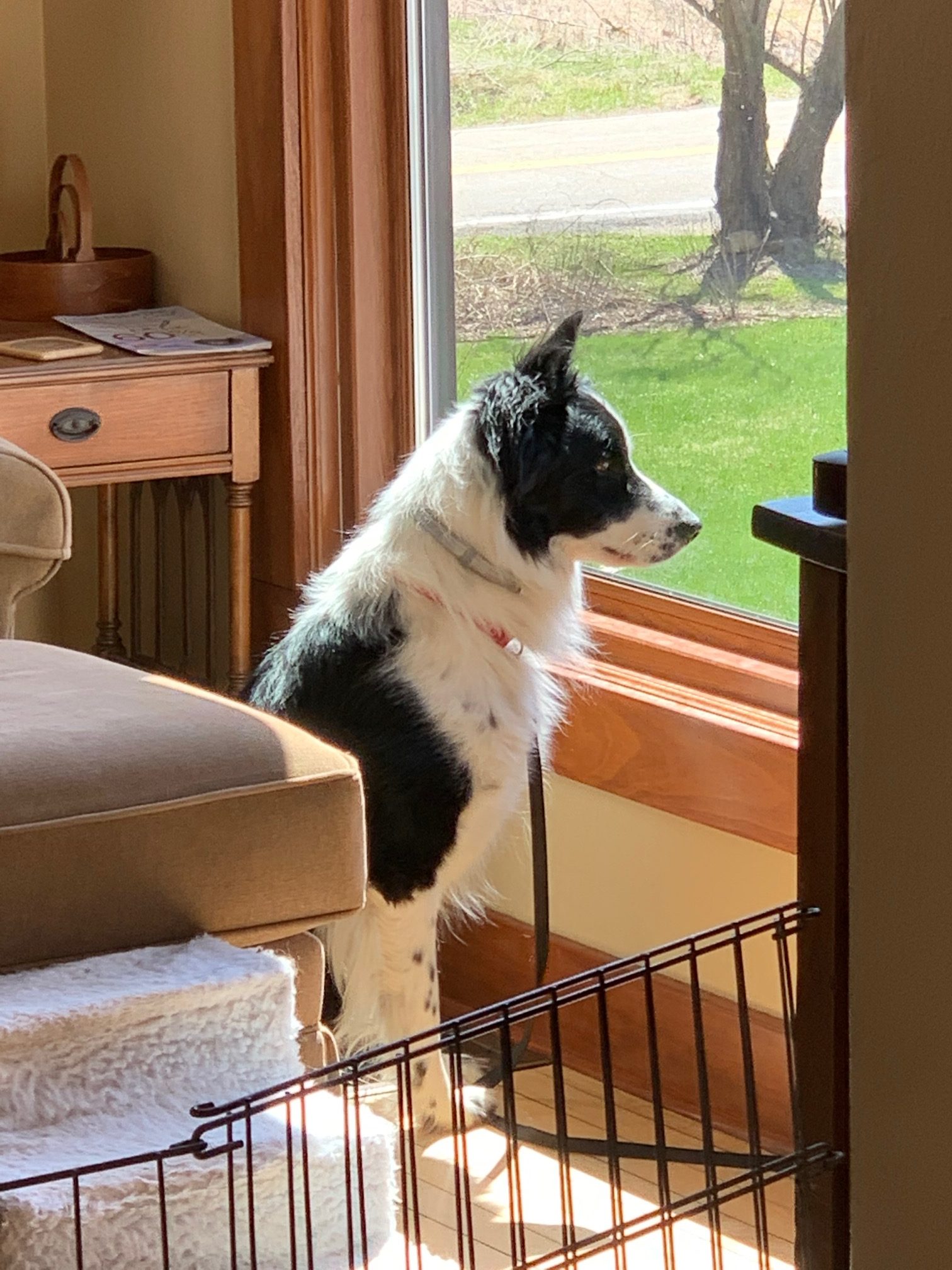 I’ve used this principle so many times, including long before I knew it had a name. For example, I used when I was first working Cool Hand Luke on sheep. Calling a young dog off of sheep is a challenge, because they simply don’t want to stop. But you have to be able to call them back to you–perhaps the sheep are exhausted, or you know it’s a best time to call it quits. I’d start by asking for a Lie Down, and the second he did, I let him circle the sheep again. Then Lie Down and Stay, then Lie Down and Come to me. Every time (except the last of course!), those behaviors were reinforced by letting him work the sheep again. Works like a charm.

Of course, with Skip’s cat obsession, I’m working on reinforcements that don’t have anything to do with cats. Staring out the window at the cats is not a good long term strategy to teach your dog to stop obsessing on the cats. (And I so look forward to the days when we can stop pulling the drapes down . . . ) But I’m ever so grateful for the principle of “most probable reinforces least probable” for now.

I’m looking forward to hearing from you about your experience with this concept. How have you used it? Or how could you use it in the future? On your dog? Or yourself? The person you’re living with who could use some behavior adjustments. (Ha, those will be fun to read about!). It’ll be great to hear what you have to say.

MEANWHILE, back on the farm: The 400 + daffodils are starting to fade, but here are some late bloomers that I planted last fall over Willie’s grave. Hard to believe that he died just about a year ago. Seems like forever . . . and last week. 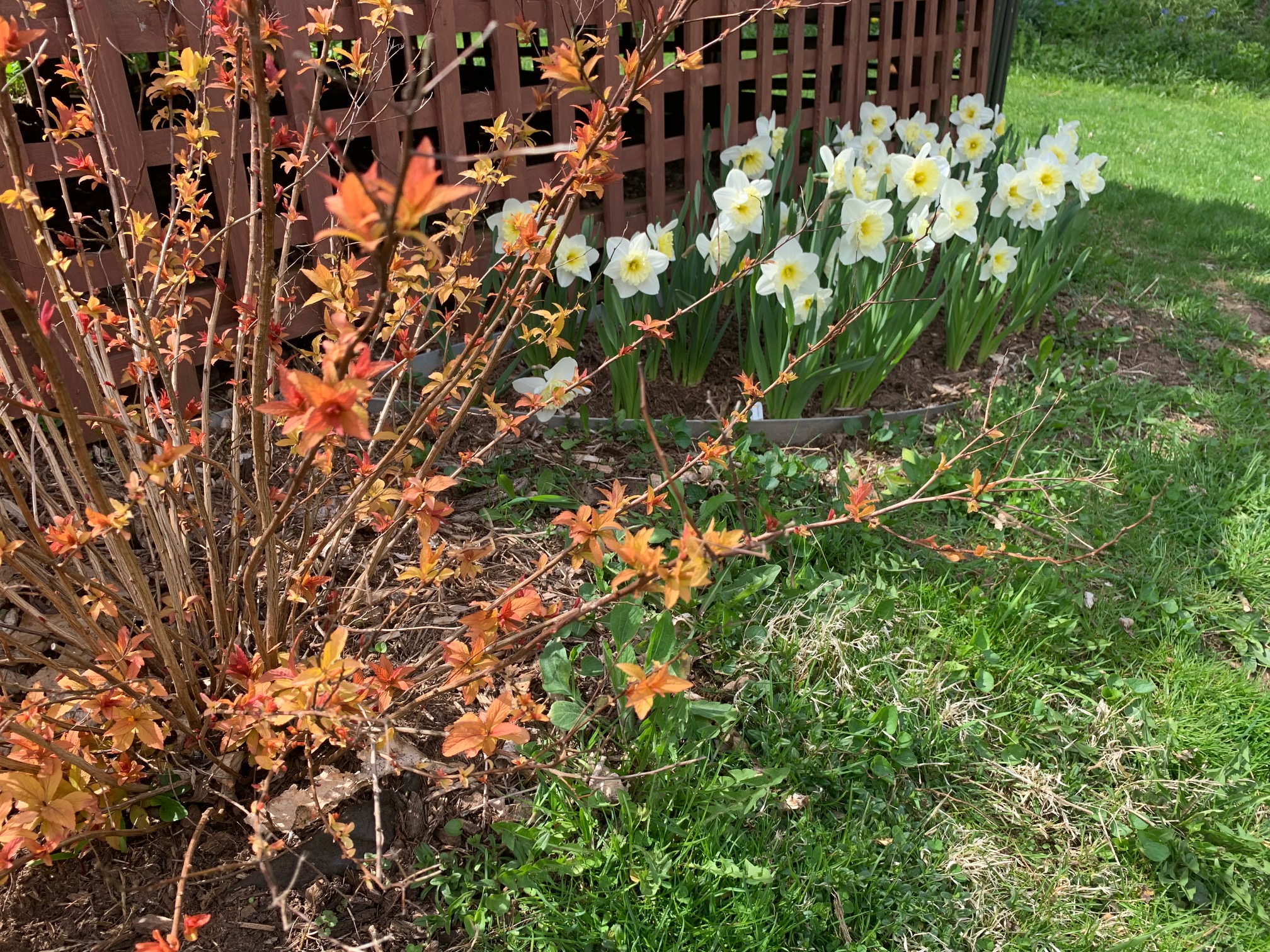 Skip has progressed to 35-45 minute leash walks, which has us enjoying many of the local trails and native wildflowers. Jim and the dogs patiently waited while I shot some photos of one of my favorite spring ephemerals, Bellwort. 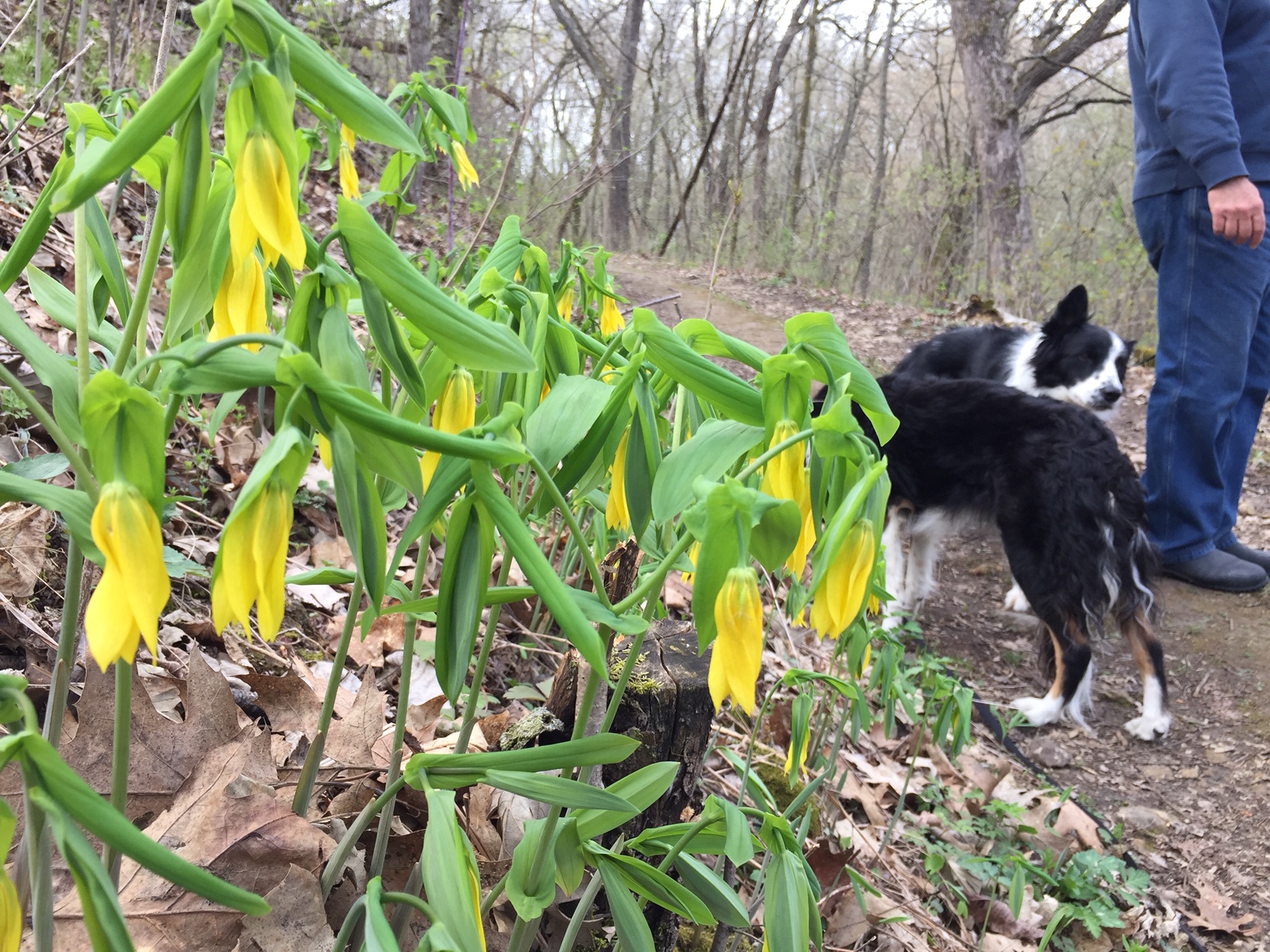 I love this shot of the moon peeking through the trees. Last month’s full moon looked huge, and I hear that the next “super moon” will be on May 7th.  What fun. Last week Venus was so bright it looked unreal. I hope you managed to see it, it was gorgeous. 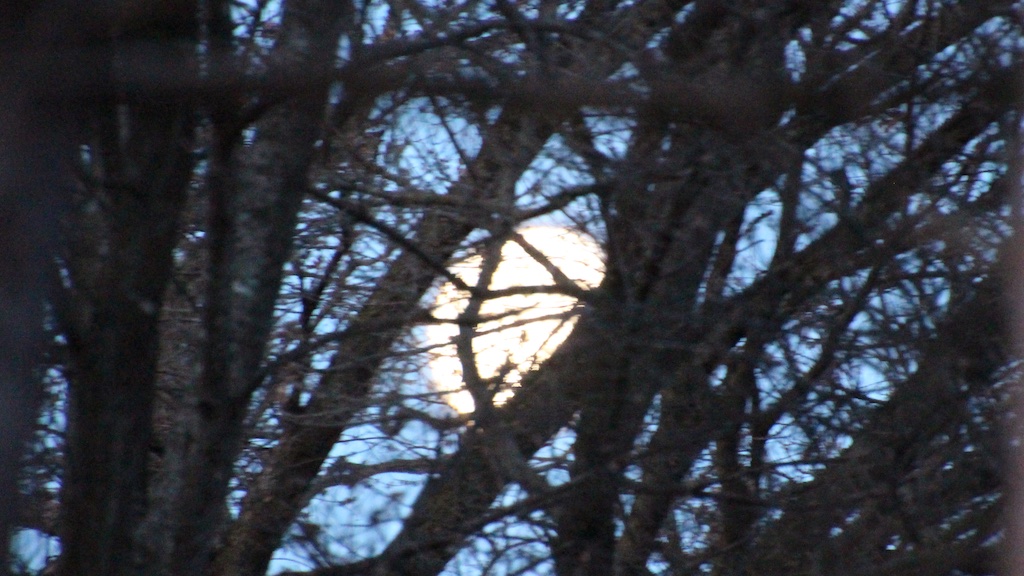 And, from last night, a fried chicken and buttermilk biscuit picnic we took to Brigham Park. The park has gorgeous views of the Baraboo Hills, and the chicken and biscuits, if I do say so myself, were about as good as food can get. Thank you Bon Appetit (chicken) and Melissa Clark from NYT Food (biscuits) for the recipes. Scrumptious. 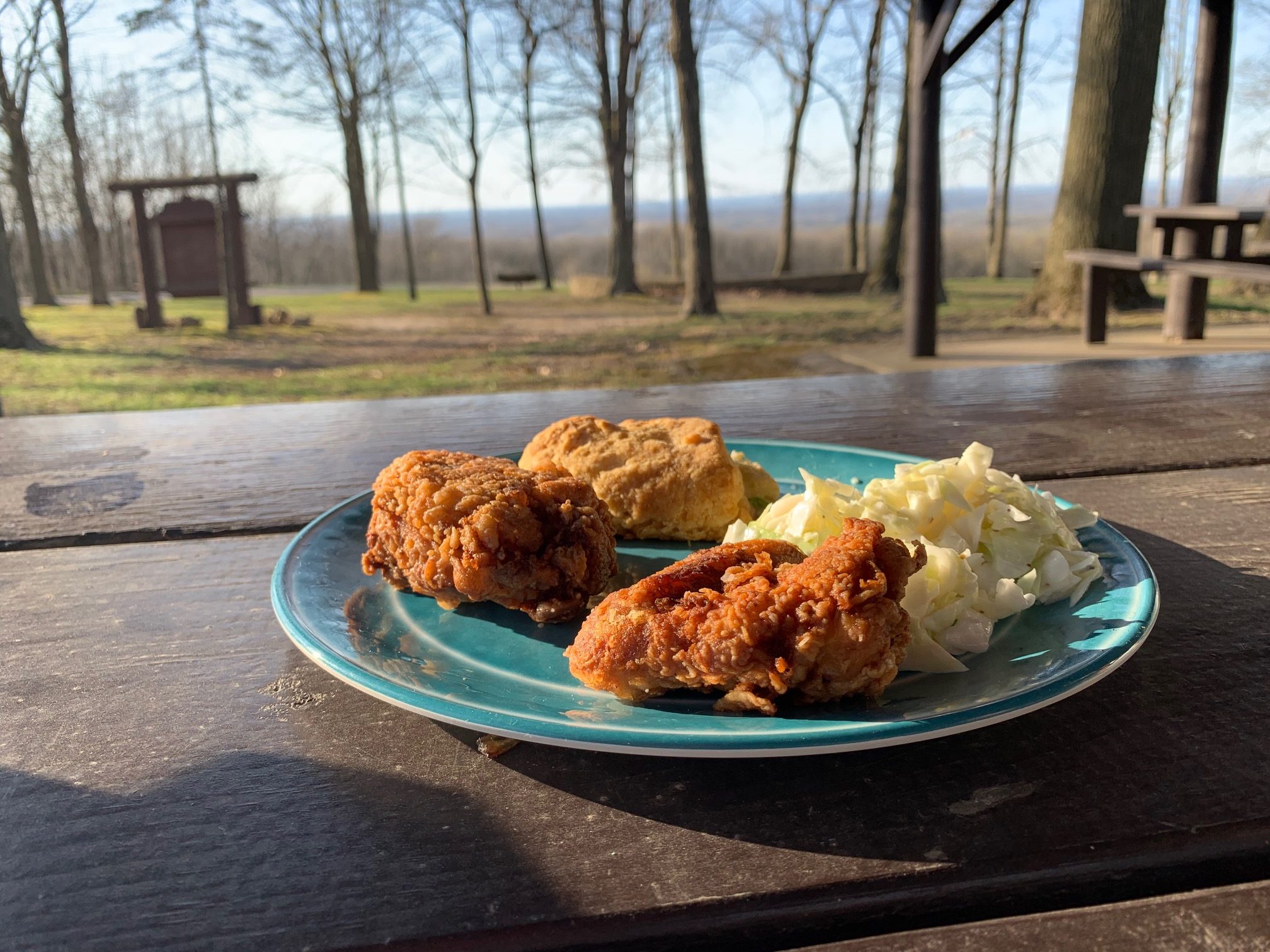