Welcome to an ongoing inquiry about the behavior of people and dogs.
Blog Home >> Animals and the People Who Love Them >> The Puppy Culture DVD & Early Development in Puppies

You gotta love a woman who names one of her Bull Terrier puppies “Betty Pork and Beans.” But there’s a lot more to love about Jane Killion’s latest work, Puppy Culture DVD. I’ve watched every minute of it, and highly recommend it. I’d get it and watch it whether you will ever raise, or even get, a puppy yourself. You’ll learn a lot about dogs by doing so.

The focus of the DVD is the effect the first twelve weeks of a dog’s life on its emotions and behavior as an adult. In the introduction, Ms. Killion correctly argues that many of a dog’s genes can switch on or off, depending on the environment in which its raised (including in utero). The video (all 3.75 hours of it, not counting the hour-long ‘recap’), follows Jane and her Bull Terrier bitch, Daphne, as they together raise seven puppies. The program is divided into sections, correlating with the development of the pups. Starting our journey with the very pregnant Daphne, we listen to Jane talk about research that suggests females who receive “caressing and affection” will give birth to more docile puppies. Watching Daphne’s face as Jane rubs her belly and talks about the importance of affection is almost worth the price of the DVD. [Note: Julie Hecht and I looked for a study that validated this claim and couldn’t find it. There is good research that shows gentle handling has positive effects on pups after birth (Gazzano et. al. 2008, Appl An Beh Sci 110.), but nothing we could find on an in utero effect.]

After the pups are born, we listen as Jane describes the importance of low light and a quiet atmosphere, arguing that too much of either, even though the pups can’t see or hear yet, can cause permanent damage. (She doesn’t mention the research that supports this, but it makes sense, given the evolutionary background of bitches birthing in an underground den.)

Puppy Culture continues through each stage of the pup’s development, 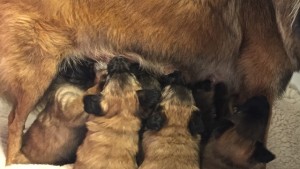 emphasizing how the right environment can interact with genetics to create a stable, inquisitive pup who learns well, is resilient after surprised or when faced with novelty, and is affectionate to both people and dogs.

Jane emphasizes that a true “socialization period” is only from 3 to 12 weeks (give or take a week, depending on the puppy). It is a specific period in neural and physiological development during which the brain is programmed to take in certain information. Taking a dog to meet other dogs when it is six months old may be “socialization,” but it has a much different effect than if it occurred during the “socialization period.” Make sense?

We viewers continue watching the puppies grow and develop, as Jane shows us how she makes the most of each state of development. The puppies get new objects and toys in the box starting at three weeks, to help them habituate to novelty. At three weeks, once their ears are functioning, Jane begins habituating them to loud, abrupt noises–a perfect time to help them learn resilience, because their fear period has not begun. The puppies startle briefly, then recover, taking 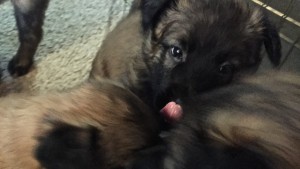 surprises in their stride. (If three -week old puppies can be said to have strides.) Contrast this with the fear period, (beginning around five weeks of age in most pups), when pups are now mobile enough to get themselves into real trouble. I love that Jane advises breeders to continue to introduce new things when the pups are five weeks old, but never to push pups, and to always give them a secure place to escape to. Excellent advice. I do have a small quibble when she says that both “sides” are correct when each argues that you can can or can’t reinforce fear. I’d put it another way: You can’t reinforce fear, but you can reinforce ways to cope with it. I do like her advice to let pups figure things out on their own, unless they are truly frightened, in which case, of course, they should be rescued and soothed.

There’s a great section on preventing resource guarding. Around six weeks of age, Jane suggests that all pups should be conditioned to feel happy anticipation when someone takes away their treasure. She interviews Jean Donaldson, who wrote Mine! A Guide to Resource Guarding in Dogs, 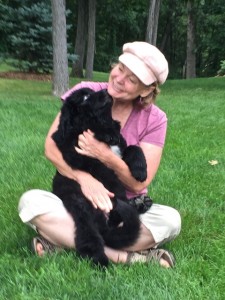 who describes the standard “take away and give something better” routine. I’ve used it myself with hundreds of dogs, and can attest that it can be extremely successful. But doing it at this critical stage of development means, at least theoretically, that just a few sessions can be enough to prevent resource guarding for a lifetime in an adult. (Next minor quibble: At one point it is stated that conditioning the pups to prevent RG is “100% successful.” My ears pricked up and my skeptic radar began flashing, but then later both Donaldson and Killion say that nothing in behavior is 100%. Whew. Flashing red warning light went off.)

As long as I’m on quibbles, I’ll mention my only other one: Several times Jane states “Research shows that…” without giving us any information about the study, who did it and where to find it. I suspect that many of the people who are going to take this DVD to heart are the kind that would love to see the study them selves. Second, it’s standard in science that if you’re going to summarize a study, or quote from it, you  have to refer specifically to it. I found it frustrating that there was little detail about what study was being referenced.

That said, the DVD is full of good information. It has many invaluable sections, including a detailed discussion of why the pups should start learning polite behavior through the use of positive reinforcement, not force-based punishment, how to have a good puppy party, and the real value of “puppy testing”. Jane does a particularly good job here, making it clear that puppy tests, as commonly done, aren’t necessarily predictive of an adult dog’s behavior, but a good diagnostic to see what a pup might need help with during the important first twelve weeks of life.

Overall, the production values are off the charts, watching the puppies grow and development is beyond charming, and Jane includes interviews with a variety of experts. Well done. Besides the wealth of information about the development of the domestic dog, here are my favorite two parts:

1. Watching puppy Betty Pork and Beans learn to go around a barrier rather than through it. The rest of the litter figured it out within seconds, but Betty P & B couldn’t consider an alternate strategy for the longest time, and began ramming the barrier with her bull terrier ram-like head. I laughed so hard I had tears in my eyes.

2. When Jane Killion sits with a puppy at the end of the first disc and explains why it is so important to teach pups how to tell their humans they want something. (She uses a clicker to teach a pup to sit when it wants something, rather than jumping up or barking.) I got all gooey eyed when she explained how important it is for any social animal to have a way to be heard, to have a voice. That’s why I got into the field myself, to give dogs a voice, and her words melted my heart.

Why should everyone watch this video? Especially, one might say, since there are so many homeless dogs in the world who need homes? Why highlight a DVD that focuses on breeding yet more dogs? Ah, I’m glad you asked. Here’s the reason: Because this video, as much as anything one thing I can think of, highlights how important early development is to a dog’s health, happiness and behavior as an adult, and how important it is to raise puppies in the best way possible. No matter how many adolescent and adult dogs need homes (see Love Has No Age Limit: Welcoming an Adopted Dog into Your Home), the fact is that some people will always want a puppy instead of an older dog. Puppy Culture sets the gold standard for responsible breeders, and illustrates why good, responsible breeders should be celebrated, not castigated.

Thanks, by the way, to Dawn S and Beth V for letting me take photos of their pups, and spend the morning in a bath of oxytocin. It’s a tough job, but someone has to do it.

MEANWHILE, back on the farm: Home Sweet Home in the Walnut Grove Tent Camp! Jim, son Zach and partner Sarah and I spent Saturday afternoon putting up the tent and bringing in the furniture. We are up and running! A few glitches, of course, but overall it is a great success. After we were done we grilled out steaks from the fire pit that Jim built, and munched on cole slaw and potato salad, made of veggies all from the CSA down the road. And brownies. Did I mention the brownies?

Maggie was afraid of the fire at first (a reasonable reaction one might argue), but soon decided that hunks of steak outweighed her concerns. Willie took to it like a duck to water, and by the end of the evening the dogs took over the tent interior as if it had been built for them. (The old rug from the living room is now in the tent, no wonder it feels so homey.) Tootsie hasn’t been up yet. The hill is too long and steep for her, so soon we’ll carry her up, let her sniff around, and then settle her onto the bed, her natural habitat. Then Jim and I will try our first overnight in the tent; it’ll be so fun to see how the dogs react. I expect they are going to love it there.

Here are the BCs on the tent “porch.” 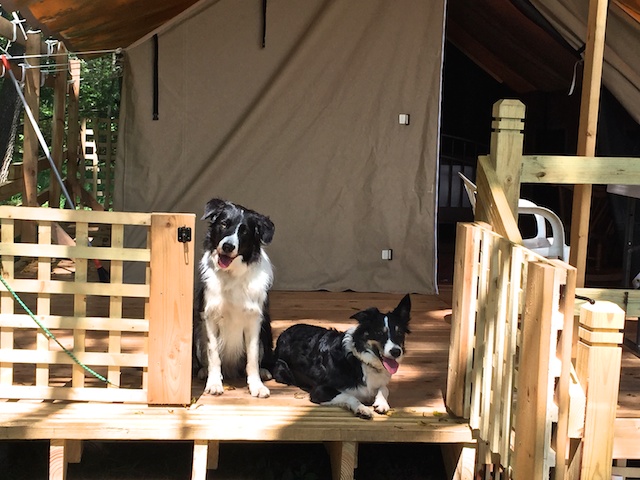 The sheep were afraid of the tent, not surprisingly. Maggie helped me move them around it in circles so they wouldn’t avoid the good grass close by, and overgraze in other areas. Can’t wait for our first night in the tent! 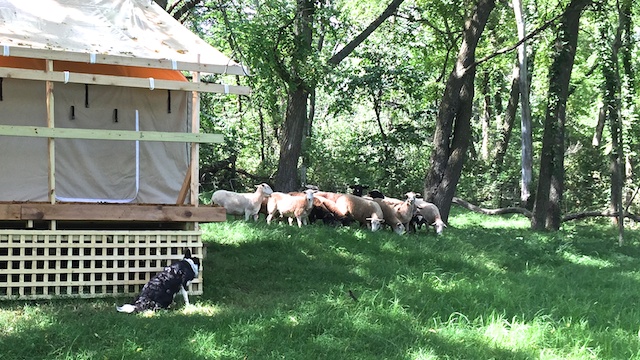 « Meanwhile…
Accepting That Your Dog Might Be In Pain »