Welcome to an ongoing inquiry about the behavior of people and dogs.
Blog Home >> Animals >> The Redstart Rollercoaster; Lambs in Winter

Has it just been two days since Snicker’s lambs were born? Or two weeks? Here’s the good news: the lambs, at the moment anyway, are doing well. Here’s the bad news: since I last wrote, Snickers tried her best to kill the ewe lamb, both lambs got diarrhea, both lambs began bawling non-stop as lambs only do when they are not getting enough food, it sounded like the white lamb had pneumonia, my car threatened to break down so we had to drive it into Madison in a snowstorm at rush hour, and then go back in to get it at rush hour later that day.

I should start at the beginning. Having lambs at all in the depth of a Wisconsin winter can only be described as an agricultural whoopsie of major proportions. Our lambs are supposed to come in early April, when it’s warmer and the grass will be lush and green by the time the lambs are ready to leave the barn. It became apparent that this plan had a glitch when I noticed that Truffles and Snickers were, what can only be described as, rotund. Once their bags began to enlarge in December I knew we were in trouble. They were apparently bred by last year’s ram lambs, who couldn’t have been much over 3 months of age. I have never castrated the ram lambs.. it’s stressful on them (okay, me too) and intact ram lambs grow better than neutered ones. I’ve never had a problem with it, just moved the ram lambs away from the ewes in mid-August when the ewes started to cycle and the ram lambs became old enough to breed.

Well, that was then, and this is now. Truffles and Snickers are a new breed for me, 1/2 Katadhan and 1/2 Dorper, each of which is known to breed out of season. Little did I know that they are also shockingly precocious… the ram lambs that bred them (one of their sons no doubt, ouch) couldn’t have been much over 3 months of age. That’s equivalent of an 8 year old boy… well, never mind.

About two weeks ago it became clear that the lambs were coming soon. Truffles seemed to be coming due first, so I kept all the flock in the barn pen, assuming Truffles would have her lambs in a safe place, perhaps in the straw inside the barn where most of my ewes give birth. I came home from a movie (Milk, fantastic) to find a tiny white lamb standing outside in the sleet beside Truffles. I did not say “oh boy.” Truffles has always twinned, and I knew there should have been another lamb. Sure enough, I found a cold, wet body lying outside, a poor little dead lamb who would have been a lovely, beautiful lamb if he had lived. I have no idea what happened… did Truffles just not attend to it fast enough and it died of hypothermia? It seemed to be barely licked off, perhaps she got so busy with the first one that she ignored the second. Jim and I both felt sick about it. It wasn’t a good night. Raising animals teaches you a lot about the inevitability of death, but it still comes hard.

That was a week ago. Here’s the good news on the one that lived: He is huge now, fat and lively. I swear he’s doubled in size. It’s beginning to look like he is an albino. My my. Here he is at the milk bar. 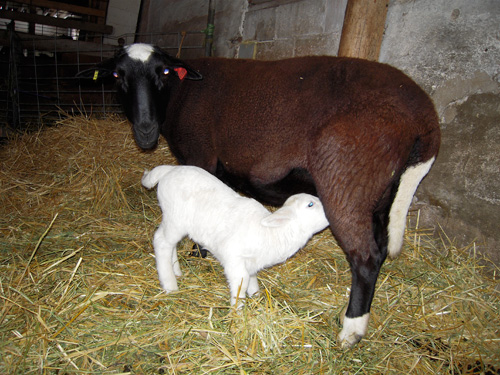 On Thursday, Snicker’s bag filled up and I knew she’d be having her own lambs soon. Luckily I was working at home, and just happened to check the barn my way out to yoga. As I walked in, the little black ewe lamb slid out of Snicker’s onto the hay. Snickers seemed far more interested in the white ram lamb, who was already up and active, so I helped clean off the little ewe lamb while Snickers alternated between the two. When I left the barn they were both up and looking for milk. I came back about an hour and a half later, and found both lambs with warm mouths and milk in their bellies. That’s when I came to Black Earth and sent my last post (dial up at home… urrrrggggggh). When I returned, Snickers was busy smashing the ewe lamb around the pen, rejecting it as if it was an alien.

Since then she accepted the lamb, rejected her, accepted her again, rejected her again and finally, as of last night, decided that both lambs are indeed her lambs. Whew. Jim and I were working on building a ‘crush pen’ (no one is crushed, honest) that basically prevents the ewe from turning and butting away the lamb in hopes she’ll finally accept it. I spent a lot of time smearing the white lamb on the black one, in hopes that the smell would transfer enough so that she’d accept them both. (It’s all about smell if you’re a ewe.) We had also gone early Friday morning in the snow storm to a dear friend and country neighbor, who amazingly enough this time of year, had goat milk. The lamb had clearly, thank god, gotten enough clostrum, but was just as clearly in need of more food than she was getting. She took to the bottle easily, so we were able to start supplementing her yesterday. Good thing too, because last night, the white lamb was bawling his head off…. clearly wasn’t getting enough food. Soon he was joined by a bleating black lamb, and now we had two lambs starving, even though Snickers let them nurse. To cap it off they had a bad case of diarrhea and I didn’t like the way their lungs sounded. What else?

I treated them w/ Vit E and gave them medicine for scours (lamb trots) and we began bottle feeding both of them with goat milk. They need feeding every 3 hours. Suffice to say I didn’t get to bed very early last night.

This morning, glory hallelujah, Snickers was happily offering her bag to both lambs, they both had fat, full bellies and warm mouths. We’re still supplementing them, it seems the smartest thing to do. It’s supposed to get brutally cold, highs zero or lower, 15 below and windy at night. I want the lambs to put on as much weight as they can and develop a layer of fat (newborn lambs are little more than skn and bones… there must be muscle there because they stand up in minutes, but to say its minimal is a understatement.) If we can get enough food in them and get them stabilized they should be okay, but it’s hard not to be a bit concerned. Here are the twins now, trying to get milk out of the bottle by themselves: 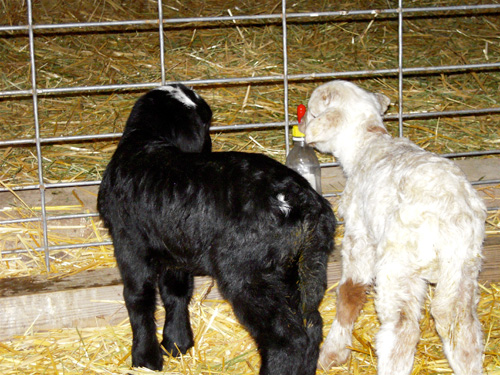 One last photo, can’t tell you how good it is to see Snickers accepting this lamb! It is pathetic to watch a lamb only a few hours old being rammed away by its own mother. We are SO happy that Snickers had a change of heart…… 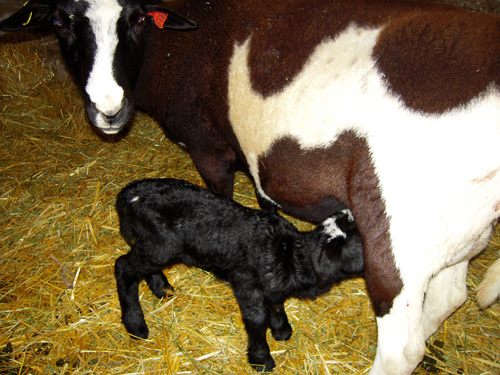 Got to go… company for dinner, and time to finish the blueberry/raspberry pie…