Welcome to an ongoing inquiry about the behavior of people and dogs.
Blog Home >> Animals and the People Who Love Them >> The Right Dog

We’ve been in a conversation about helping others (and ourselves) if and when we get frustrated by our dogs. It’s been a great one, thanks for all your comments. I thought of something important that I haven’t mentioned yet, and I thought it deserved it’s own forum.

It seems to me that an important part of whether a dog frustrates someone is based on whether their personalities match. Look at all the comments on earlier posts that said “…. and then I got THIS dog…”.

Lassie and Willie are wonderful dogs for me. I’m a bit of a Border Collie myself: I like the cold, I hate hot, humid weather, love working sheep, love working, and am so sound sensitive that I’d rather starve than eat in a noisy restaurant. Granted, I wish that every once in a while I could yell “naughty words” without them looking concerned, (Liz F commented that her grand mother actually said the words “naughty words” when she was upset, in place of saying real naughty words. I’m going to take that it on, just thinking about it makes me laugh.) but they are responsive, and fun-loving and social and smart and I love their fresh, perky faces and commitment to connecting with me.

I took care of a dog once for about five months who was an absolute star at pushing my buttons. I think it’s the only dog I’ve ever had that really got to me. I figure I’ve had at least 15 dogs here for at least five or six months, and she was the only one who I literally had to stop, take a breath and count before I responded to her. She just plain and simply made me mad, I think because she was such a “player” and seemed to have so little interest in any real social interaction. She was stubborn, and wily and downright mean to my other dogs. She’d hold a grudge and wait until she could get back at them for any imagined slight. And so, what I’ve been thinking about is the importance of matching the right dog to the right owner. So many of my clients over the years were good people who simply had the wrong dog. Or a special dog who deserved special people, and was stuck in an impossible situation.

That’s why I loved hearing about a new project outside of Philadelphia called Main Line Mutt Match. Meg Boscov and partner Liz Maslow recently had an article written in the Philadelphia Inquirer about their match making services, and I wish there were more places in the country who offered the same service. So much of what makes a dog a good match isn’t obvious to the general public. Many of us know how commonly it is believed that any wagging tail is a sign of friendliness, even when the rest of the dog’s body is stiff as a board. One of my clients refused to take any dog at a shelter who wouldn’t return his gaze and stare back directly into his eyes for a prolonged period of time–and the guy had five kids under the age of eight.

We need to do all we can do to use our knowledge to help people get the right dog. I know that there are other ‘matching making’ services around the country: I think it would be a great service to add to the repertoire of a dog training business. Meg and Liz work with a large number of rescue and shelters, and the organizations love the help. What a great thing to do.

Dogs need the right buddies too. This is a photo of Willie’s girlfriend, Mishka. Although Will is always more nervous around dogs larger than he is, he fell for Mishka pretty hard. She’s perfect for him, playful and able to stand up for herself (when Will tries to play “Let’s herd the Dobbie by nipping at her chest”). And she’s mellow and non-reactive and able to keep Will on his best behavior. Will got a bit nervous when she was in the house last, when she ran up and over him, and as his mouth began to pucker (and as I said “Will Will” to re-direct him to me), she pulled away and let him be. What a girl. Mishka’s house mate, a male Doberman, is exactly like Willie: playful but nervous, controlling but fearful, and there’s no question they’d be a terrible match. His owner and I laugh that if we ever get them together it’d be an Anderson Cooper moment (host on CNN, a station famous for loving drama). Not gonna happen. Look at Willie’s eyes carefully–the image is a little dark, but you can still see that he has his eye on the prize: the beautiful Mishka. 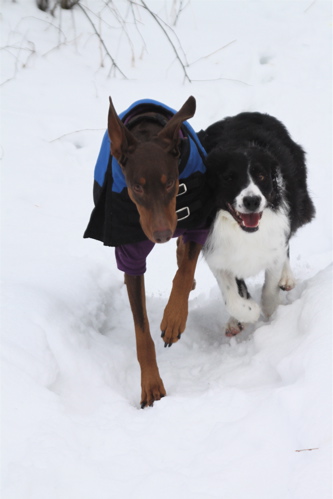 « Helping Owners with the Inevitable
Lassie »