Welcome to an ongoing inquiry about the behavior of people and dogs.
Blog Home >> Dog Behavior >> Three Ways to Confuse a New Dog

“Three days, three weeks, three months.” That’s the mantra of many dog trainers and behaviorists, when welcoming a new dog into their household. The “magic of threes” is especially relevant when adopting an adolescent or adult dog into your home. Dogs, especially non-puppies, are often in a bit of shock for the first three days in a new home, and don’t show you too much about who they are until they’ve been there a few days. After three weeks many dogs have settled in such that they behave as though they feel like they are “home” now, but don’t fit into your routine until about three months have gone by. The number three has another relevance to new dogs: See below for the three ways we most confuse new dogs, and how to prevent it.

I’ve thought about this a lot lately, for a couple of reasons. First, it is the three-year anniversary of Love Has No Age Limit: Welcoming an Adopted Dog into Your Home. I co-authored the book with Dr. Karen London, a great behaviorist and author in her own right. She shared my experience of seeing multitudes of people who had gotten an older dog, often from a shelter or rescue, and were struggling with the transition. We wanted to write a concise but thorough booklet to help adopters, and make it priced so that shelters and rescues could hand it out to everyone. The book’s success has been beyond our expectations (it’s sold over 40,000 copies so far) and makes us both all oxytocin-y inside.

In honor of the book’s three year anniversary, we’re offering a “Buy One, Get Another One Free” sale. The hope is that dog lovers will buy one for themselves or a friend, and then donate the free one to their favorite shelter or rescue group.

The second reason I’ve thought about this lately is that our new dog Maggie is coming up on her three-month anniversary here. And just like clock-work, last night I asked Jim if he had noticed how well Maggie has settled in. Everything is so much easier now, for all of us. She knows the routine and has adjusted her biological clock to it. She has learned a lot about what is chewable and what isn’t, where to go potty, how to tell me if she’s desperate to go, and has worked out a great relationship with Willie. She has a great deal to learn, lots and lots, but it almost feels like we can all breathe a big sigh of relief now that we’ve hit the three month marker.

The exact same thing happened with our Cavalier, Tootsie, when we adopted her a few years ago. Tootsie, having been rescued from a puppy mill, had little idea about where to potty, to come when called, or to do much of anything on cue. I think it took a full year for her to totally settle in (I think it takes most dogs at least that long) but the three-month marker was a big one for us.

In celebration of the magic of threes, here are three biggest mistakes people make when adopting an adolescent or adult dog:

One: “Oh, good, he’s house trained.” Not in your house he isn’t! Dogs don’t necessarily generalize from one place to another until they’ve had a lot of experience in different places, so treat your three-year old dog like a puppy for the first few weeks. That took three weeks with Maggie and three months with Tootsie, who learned to potty where she ate and slept while confined to a cage in a puppy mill.

Two: “We’ll have everyone over to socialize him!” (Variant: “We’ll take him to training class tomorrow night!”) Your new dog didn’t spend weeks or months deciding to move to a new place, so he or she is probably in a bit of shock. New dogs need quiet time to adjust to their new surroundings, so go easy on the visitors or the new experiences for awhile. Remember that your new house is as big a “new experience” as is possible.

Three: “Oh No! We’ve had him two weeks already and now there’s a behavioral problem!” It’s true that some behavioral problems are so serious that they can’t be treated, but it is much (MUCH) more common that whatever is going on will be resolved with some simple training, patience, and yes, faith. I know well what it feels like to have “adopter’s remorse,” even with my background there have been moments I asked myself what the heck I was thinking after Tootsie and Maggie came. But all dogs, just like all people, need time and good coaching to be the best they can be. Most problems are fixable, so it’s okay to take a breath and think through the solution. Most importantly: Think long term, as in, it is going to take three months for my new dog to begin to settle in, and a full year for that to happen completely.

What about you? What has been your experience when bringing an older dog into your home? FYI, if you’d like to read more, go to the Adoption page in the Reading Room on my website.

MEANWHILE, back on the farm: Wheeee! Could you please put more hours in the day? There is SO much to do this time of year in the country, but not enough daylight to do it. Yes, I know, we’re moving toward the days with the most hours of daylight, but it’s still not enough!

Will you all forgive me if I cut this short so that I can get outside in the garden, and thus have time later tonight to work my dogs on sheep? Here, by the way, is the swing we never sit in this time of year: (Don’t take this as a whine, we love working on the farm and the garden. It’s just with 12+ acres and a late, late winter, there’s more than enough to keep us busy right now.) 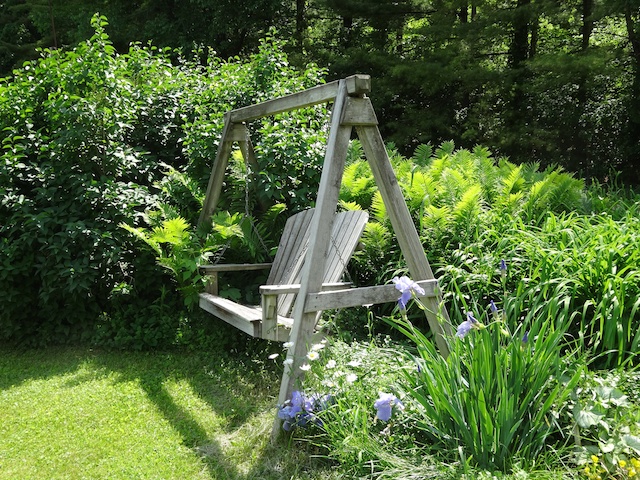