Welcome to an ongoing inquiry about the behavior of people and dogs.
Blog Home >> Dog Behavior >> Thunder Phobia and Your Dog: Good Sounds, Bad Sounds

5 AM. I wake up to Lassie’s nails clicking on the floor (wasn’t I going to trim them last night?) as a boom of thunder shakes the farmhouse. Damn.  Why is it that Lassie’s slight discomfort of storms has become more serious as her hearing degrades?  Surely it should go the other way around.

We pad downstairs and lay down together on the carpet, she spooning against me as I stroked her head. (And no, it won’t make her more afraid of storms…. check out my column coming out in Bark magazine soon.)  “Eaa-a-a-a-a-a-a-sy” I crooned, using my voice to help her calm herself.  Why didn’t I bring the CD home from “Through a Dog’s Ear,” a new and fantastic book about the effect of sound on dogs? The CD has music
designed by the authors to calm dogs, and both it and the book are invaluable resources for anyone who is interested in dog behavior.

The authors know what they are talking about.  Susan Wagner is a veterinary neurologist and Joshua Leeds is an expert in psychoacoustics. They got together to investigate the effect of sound on dogs, and to create music that could act to calm nervous canines.  Their work is ‘music’ to my ears (sorry), given that my dissertation research was on the effects of different types of sounds on the behavior of domestic animals.  In brief, I found that short, rapidly repeated notes increased activity, while two different types of notes were used all around the world to slow or stop animals. Long, extended one-noted signals (like “Whooooooooaaaa” and “Staaaaaaay”) were used to slow or calm animals, while one, sharp highly-modulated note (think up and down in a brief period of time) were used to stop fast moving animals (‘DOWN!” or “WHOA!).

The research in Through a Dog’s Ear’s follows those same general principles, but adds more, including “harmonic complexity” as well as carefully designed tempos and note intervals.  The authors did research (I can’t wait to see it) that suggested that their calming CD really did settle dogs down.  I talked about this at a seminar I gave in Madison, WI and one participant said her shelter had been using for a while, and it was extremely successful. (So  much so that the dogs who wanted to play chose to go outside, presumably to avoid the effects of the music.) We all listened to the CD, and I swear I had to stop because we all would’ve have gone to sleep. (The authors address that too… they found that dogs settled after just a few minutes, and they could pick up the beat after that to keep the people awake without disturbing the dogs!). I’d love to hear if you have tried it yourself.

I was so impressed with the book that we offer it on our website now (patriciamcconnell.com), but you can get it in lots of places. I haven’t finished reading it yet, but this morning’s storm put finishing it at the top of my reading list.  I’m putting it and the CD in my “take home from the office” bag right now, so that I’ll have it at the farm tonight and tomorrow if the storms come back.

At worst, maybe the  CD will help ME go back to sleep while I cuddle with Lassie through the next set of storms. Here’s my Lassie girl, all fourteen and a half sweet-as-cream years of her. 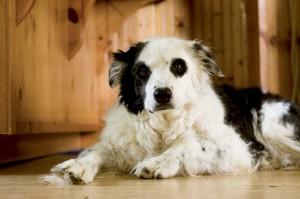 Us, Our Dogs and Sound Pollution »