Welcome to an ongoing inquiry about the behavior of people and dogs.
Blog Home >> Dog Behavior >> Thunder Phobia in Dogs

I promised I’d write more about treating thunder phobia in dogs, beyond the earlier posting that it won’t make things worse if you try to comfort them. It’s such a serious problem for some dogs (and their humans), and everyone who has a dog who suffers from it deserves some help (or just support!).

All I can do here is to summarize some of the treatments I have known to work.. a thorough discussion of treatments requires a booklet unto itself . I encourage you to send in comments to let others know what has worked for you, because if there’s one thing I’ve learned, it’s that there is no one treatment that works for all dogs.

Counter Classical Conditioning: This is the first treatment I recommend, and it is especially effective in mild or moderate cases. I’m doing it now to prevent thunder phobia in Will, who is one of the most sound sensitive dogs I know, but so far has not reacted with any anxiety to thunder. In this paradigm (described in a a general sense in The Cautious Canine), you pair something the dog adores (food or play best) with a damped down version of what scares him. Your goal is to condition your dog to associate thunder with something he loves, so that his emotional response to the loud noise is “Oh boy!” rather than “Oh No!” To get this to work:

Pheromone Therapy: I’ve had several clients who had good success with Dog Appeasing Pheromone, or DAP, which is an artificial replicate of the pheromone produced between the mammary glands of a lactating bitch. It is species-specific and has no detectable odor and has the huge advantage of requiring you to buy it and plug it in. Period. Perhaps the easiest behavioral treatment known to science. It has some good research behind it and I’ve recommended it to clients for several anxiety-related problems in dogs and cats (Feliway is the brand name of one of the feline versions) and I’d estimate that it appeared to be helpful in at least half of them.

Acupuncture/Acupressure: I’ve never used this specifically for thunder phobia, but as I’ve said earlier, have used it for a variety of problems with good success.

Wraps: I’d be curious about reader comments on their success with wraps (originally developed by Linda Tellington of Tellington Touch). The theory is that in a general sense, swaddling provides a sense of comfort and safety. More specifically, the speculation is that the continuous neuronal stimulation of the wrap on the dog’s body at minimum distracts him from his fear (a process often called “overshadowing,” in which one stimulus modality dominates an animal’s nervous system) or at best, creates the production of endorphins that de-activate the amygdala and create a sense of calm.

I tried a wrap on Pip and she certainly appeared to be “calm,” but then, that was because she pretty much stopped moving altogether. I wasn’t sure if she was relaxed or in what’s called “tonic immobility,” (or frozen with fear) but after about 10 minutes she lay down and went to sleep, so I relaxed myself and tried it the next time a storm came up. (Use it first before a storm.) It seemed to work miracles at first… she slept right through the next two storms. But wouldn’t you know, the next storm was a barn burner, and it never worked after that. Have you ever tried wraps? (I should add that Pippy looked adorable in an old pink T-shirt! It made me smile anyway!) There are many commercial products available now, but I’ve never seen any research that they would be more effective than wrapping a la Tellington Touch or using an snugly-fitting T-shirt.

A Safe Place: I wrote in For the Love of a Dog about a dog whose job was to protect acres of vegetables from deer, and who became so afraid of thunder he’d run through the electric fence and risk his life on the county highway. I designed, and the owners built, a ‘safe house’ for him, and his dedicated human, Barb, spent many a wild night hunkering in his straw covered cave giving him chicken in storms. It worked incredibly well, but it took one amazing woman about two months of dashing 200 yards across the lettuce and beans to get to the safe house before the thunder started!

Safe houses can be created inside houses too… I’ve had several clients who did the counter conditioning in a roomy closet or sound-insulated dog house, and ended up with a dog who was still a bit nervous about thunder, but simply went to her safe house and curled up and slept through the storm.

Sound Therapy: I’ve talked before about the interesting work of Leeds and Wagner in developing music specifically designed to calm dogs. Their work is based on solid biological principles, and I’ve seen many cases in which anxious dogs appeared to be calmed by playing their music. You can read more about it, and get a CD of the music by checking out their book, Through a Dog’s Ear.

Eliminating Static Electricity: Nicolas Dodman suggested a few years ago that part of a dog’s fear of thunder storms could be due to static electricity. One of the blog readers commented that she, in desperation, wiped her dog’s coat with an anti-static dryer sheet, and that it seemed to help. Interesting… I know that Tufts was doing a study of Storm Defender (a wrap that is designed to dispel static electricity), but I haven’t seen the results yet. Any one seen any studies on this yet?

The list goes on.... there are so many things that people have tried. Claudeen McAulifee has a good booklet on treatments from homeopathy to flower essences to melatonin, etc. It’s called the Big Bang! and it’s the only booklet I know of exclusively on the topic of noise phobias. She doesn’t talk about counter conditioning, but goes through many different kinds of non-intrusive treatments (including the use of pink light…… interesting!).

And last, but not at all least, Medication: Serious cases of thunder phobia can be life threatening. I’ve had clients whose dogs ran away, and weren’t found for days, and clients whose dogs jumped out of second story windows, mutilating their bodies in the process. I wouldn’t hesitate to suggest that someone talk to their veterinarian about using medication as a supplement to counter conditioning or other methods if their dog has a serious case of noise phobia. In the most serious cases the veterinarians I’ve worked with have prescribed both a tricyclic antidepressant (like clomicalm) and a fast-acting tranquilizer (like diazepam). In many serious cases, I’ve found over the years that a combination of meds, counter conditioning and a ‘safe house’ led to a successful resolution, but I would now add in music from a Dog’s Ear without a doubt.

That said, again, every dog is different, and not all dogs can be cured. As John Paul Scott said to me once, (of Scott and Fuller, and yes, I’m dropping names, I was thrilled to meet him!) not long before he died “Of course dogs are afraid of thunder, to them it sounds like GOD IS GROWLING.”

Meanwhile, back at the farm: Spring is glorious, gorgeous, wonderful and exquisite. it’s amazing how few days like today one needs to make an entire 5 months of winter worth it! There is also so much to do (besides grading 300 pages of essay exams and supevising the grading of another 900) it is overwhelming, but I”m going to focus on the good part!

Here are Tulip’s tulips from the window in the living room, showing the view she had as she overlooked the farm: 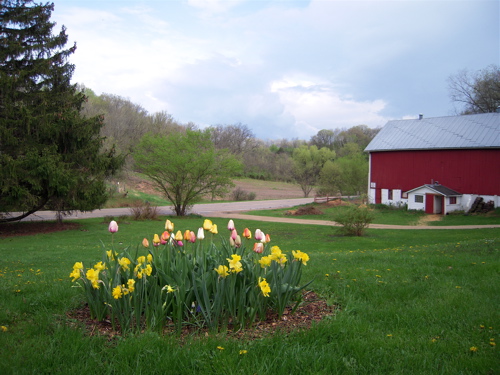 I fear you will all get tired of yet another photo of Mr. Will’s bright, expectant face, but it does remind me of spring! (This was taken a week ago, and wow is it different now. The leaves are coming out, the size of a squirrel’s ear, and right on schedule, or a little late, the warblers have arrived this morning. As colorful as any tulip (but too hard to get good photos of for me!). I’ll post more photos of spring at the farm as soon as I can get outside again…. 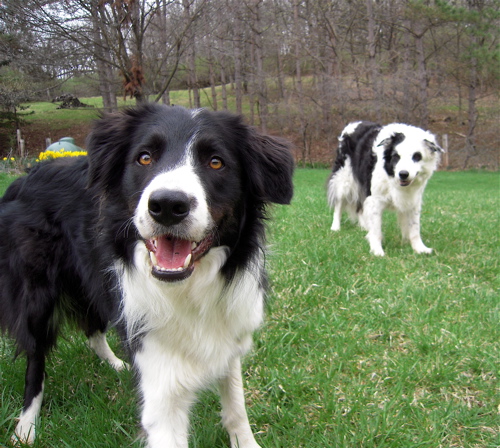