Welcome to an ongoing inquiry about the behavior of people and dogs.
Blog Home >> Animals and the People Who Love Them >> Thunder Treats. Or, The Woman Who Mistook Her Dog for a Hat

Saturday night we slept in the tent, the Border Collies on their sheepskin rugs, and Tootsie in bed with us as usual. It was a lovely night, until it wasn’t. Somewhere around dark-thirty the wind came up, lightening lit up the sky and the thunder began to roll. When Tootsie first came to us years ago she was terrified of thunder, and expressed her fear by attempting to crawl into my mouth. At least, that’s what it felt like. She seemed driven to crawl around and on top of my face. Nowhere else would do, and no amount of tucking her into my shoulder, or beside my torso, or petting or soothing helped.

I pulled out the easiest noise phobia treatment in the toolbox, and began giving her a tasty treat every time it thundered. This doesn’t work for all dogs, but it works well for many and because it’s so easy, it’s always worth a try. Tootsie responded well; apparently her noise phobia was not so intense that it squelched her appetite, as it does in some cases. Toots did not become a dog who snored through loud thunderstorms, (as my thunder phobic BC, Pippy Tay eventually did) but she became calm enough that I discontinued the treats last summer.  It helped that we discovered, mutually it seems, that she could completely relax if allowed to drape herself over the top of my head during storms. I’d push my pillows up as if I was going to read, lay Tootsie over top of my head like a lumpy, furry scarf, and we’d both sleep soundly unless the thunder was so loud it was impossible for anyone to ignore. Thus, with apologies to the memory of Oliver Sacks (The Man Who Mistook His Wife for a Hat), I became, The Woman Who Mistook Her Dog for a Hat.

Things were different Saturday night in the tent. It’s one thing to be in a house with the drapes drawn in a storm, another altogether to be in a tent with the flaps open and the noise and lightening seemingly right on top of us. (We were also on the highest point of our land, and next time that happens I think we’d be wise to dash down the hill into the house.) All the dogs were nervous. Willie kept putting his front legs up on the bed to solicit comfort. Maggie withdrew into herself and curled up into a hedgehogian ball. Tootsie resurrected her need to begin archeological excavations into my mouth. But, lucky us, I had a bag of dog treats with me, and sure enough, within minutes Tootsie morphed into a tail-wagging, drooling, treat-crazed fool for food. Gradually I decreased the frequency of the treats, and she settled against me while we rode out the storm.

I’ve written before about how to handle noise/thunder phobia (Thunder Phobia in Dogs) but that was awhile ago, and I’m curious what your experience is now. Do you have a dog who is afraid of thunder? Or fireworks? If so, what method have you used to treat it? We have such a large range of options now, including classical counter conditioning (as I was using), wraps, western medicine, “adjunctive/alternative” medicine, TTouch™, pheromone therapy, acupuncture, sound ‘therapy,’ safe houses (as I wrote about in For the Love of a Dog), and… what else? Given the timely nature of this topic, at least here in the northern hemisphere, I’d love to hear about your experiences with this issue. If you want to read more about the threatment methods I listed, see Thunder Phobia in Dogs.

MEANWHILE, back on the farm: Forgive me my flower obsession, but it’s peak season for my garden flowers and they give me more pleasure than I can say. This area of the garden was hard won–Jim, farm helper Stephanie and I spent many hot, sweaty hours digging out box elder and raspberries and heaven knows what else to create this garden over the new retaining wall. This is year three, and the daylilies, cornflowers and daisies are truly coming into their own 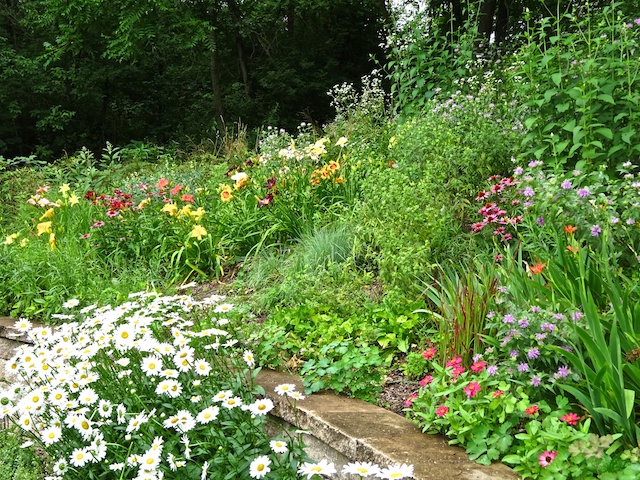 The dogs got lots of cuddle time because Jim and I watched the British Open. (Amazing! Anyone else see the final day?) Maggie loved all the couch time, and has become a pro at sitting beside me to maximize her belly rubs. 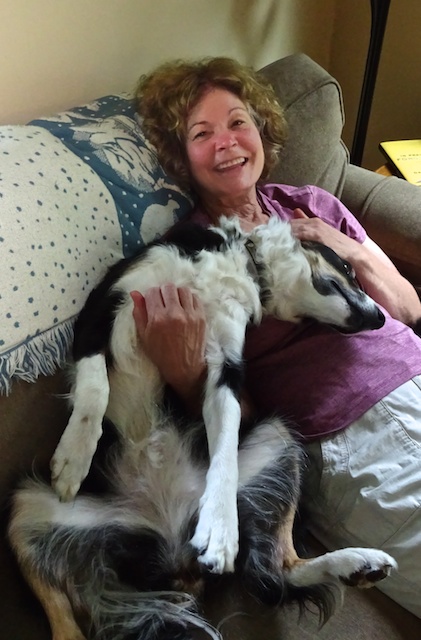 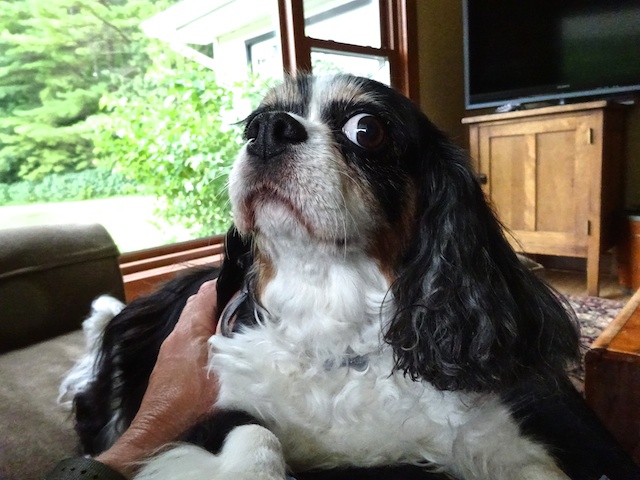 « Presence–Don’t Let Your Dog Leave Home Without It
Stress? Fear? Or “Displacement Behavior”? »