Welcome to an ongoing inquiry about the behavior of people and dogs.
Blog Home >> Animals and the People Who Love Them >> Tiny Signals, Big Responses

This is, in part, a repost of one of the very first blogs I wrote, from August of 2008. (Almost 11 years ago? Wow.) I am posting it again for several reasons–we have a lot of new readers; it’s always fun for me to see if I still agree with what I wrote in years past; and most timely, I’ll be speaking on a similar topic on Vashon Island, WA, Saturday June 8th, about “Lost in Translation — What Your Dog is Trying to Tell You”. 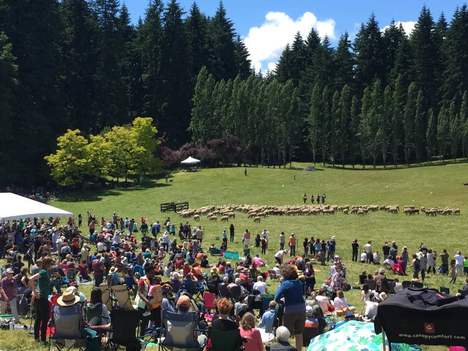 This trip is going to be super fun in so many ways. After spending much of the day at the Vashon Island Sheepdog Classic on Saturday June 8th, I’ll lead off my talk at the Vashon Center for the Arts with videos illustrating that sheep are brilliant at reading subtle visual cues from dogs, and vice versa. Dogs and sheep make it clear that you don’t need language to say lot, and you don’t need big movements to convey a lot of information if the signals are salient.

Example: Here’s an old photo from the very first sheepdog event I ever attended. This is Jack Knox’s Craig dealing with Suffolk ewes who have never seen a dog before and had not read the chapter that describes them as “prey animals”. It’s pretty obvious who is intimidated here, and it sure isn’t the sheep! 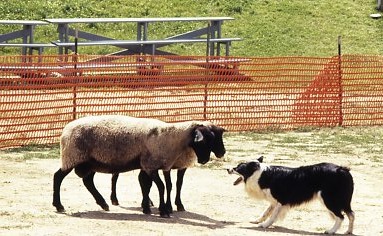 I’ll also be at the trial on Sunday, and will do a lunch-time interview with the awesome Julie Forbes, formerly of  The Dog Show (but now about to launch a new project called Discovering Dogs). I hope you can come to the talk and the trial both. If you get to the trial, I’d suggest bringing binoculars, because some of the communication between the sheep and the dogs at the top of the field is fascinating. (And be forewarned, I hear the ferry gets super busy on Saturday and Sunday–10,000 people came to the trial last year!)

Here then, is from August 2008, after a seminar in Ann Arbor, Michigan for the Ann Arbor Dog Training Club:

One of my favorite parts of this seminar (Both Ends of the Leash) is its focus on signals, or cues. The question we looked at in depth was: what sound or movement is actually the one that is salient to your dog? You may say “Sit,” and think your dog is responding to it, but so often it’s the tightening of the leash or the nod of the head to which your dog is responding.

We had a great example of that in Ann Arbor. A lovely Golden (perhaps the most perfect example of “Life is good if you’re a Golden” I’ve seen in a while…. I mean, this dog was HAPPY HAPPY HAPPY!) was being asked to sit and stay. The dog was young, and was just in the beginning stages of understanding stay. We were working on practicing body blocks as a response to a break. Two women, great observers, noticed that the dog broke, every time, when the otherwise almost motionless owner let the leash unravel just the tiniest little bit. After saying stay, she backed up one foot and didn’t move, keeping eye contact with the dog. But without knowing it, she let the coils of the leash in her hands unravel an inch or two, and every time she did the dog broke.

That was an especially interesting observation, because I had just suggested to the owner that the only change I would make in her training was let her body loosen and move a bit while the dog was on stay, because otherwise the stillness would become the cue to stay, and any motion would cause the dog to break. Sure enough….

What a perfect example of a wonderful dog and a super trainer communicating on slightly different planes. It’s just amazing how tiny a movement can be, and still get an effect out of a dog sometimes.. .  Sometimes I wonder how we ever manage to communicate correctly at all!

Well, I haven’t changed my mind one bit about the impact of tiny but salient visual signals. I’m working on my own related challenge now. Maggie and I are learning how to shed, and just the tiniest shift in my direction or gaze can influence the sheep and mess up our ability to separate the flock into two parts. ( In a “shed”, the handler holds the sheep on one side, the dog on the other. The handler moves in such a way to create a gap between the sheep, sometimes just inches, and calls the dog in between, to turn on one group and move them away from the other.) There’s a lot to attend to, and I’m very much in the beginning stages of getting it all sorted out. Not surprisingly, Maggie is already progressing faster than I am, being far better than me at reading subtle visual cues from sheep. Sigh.) Sheds are fascinating to watch at sheepdog trials by the way, I hope you can see one soon. (Save the date for the Wisconsin Midwest Championship Sheepdog Trial in Hudson, WI over Labor Day. It is a phenomenal trial!

MEANWHILE, back on the farm: On Saturday Jim and I were honored to walk with the good people and dogs of Pet Pals to lead off the “Inspire Hope” walk of Czar’s Promise, which raised over $80,000 to fund research at UW-Madison on cancer prevention and treatment, as well as support for people whose dogs are fighting it. You can imagine how special it felt. Here are some photographs from the day:

Top row: adorable dog portraits, middle left are the wonderful people from SAVE (Sheltering Animals of Abuse Victims), middle right the awe-inspiring Beth Viney who organized Czar’s Promise after losing the noble Czar to bone cancer, bottom left my kick ass graphic artist and website designer Julie Mueller (Jam Graphics) and partner Joan, and me and Courtney Arnoldy having a moment–she is the one who rehabilitated Willie after his massive shoulder surgery and has done wonders with Maggie after her leg injury last summer. Willie and Courtney had a special bond, and well, we couldn’t make it through the day without a hug.

Thank you to everyone who generously contributed to the cause. The day was a great success and hopefully will lead to people and dogs leading longer lives.

On another note, today Maggie and I moved the sheep from one pasture to another. We are doing “controlled grazing,” in which the sheep get moved every few days to fresh grass, while the ‘old’ areas are left alone to grow back up. This forces the sheep to eat all that’s edible, rather than just their favorite species, which creates healthier pastures in the long run. It’s one of the many benefits of having a great sheepdog. 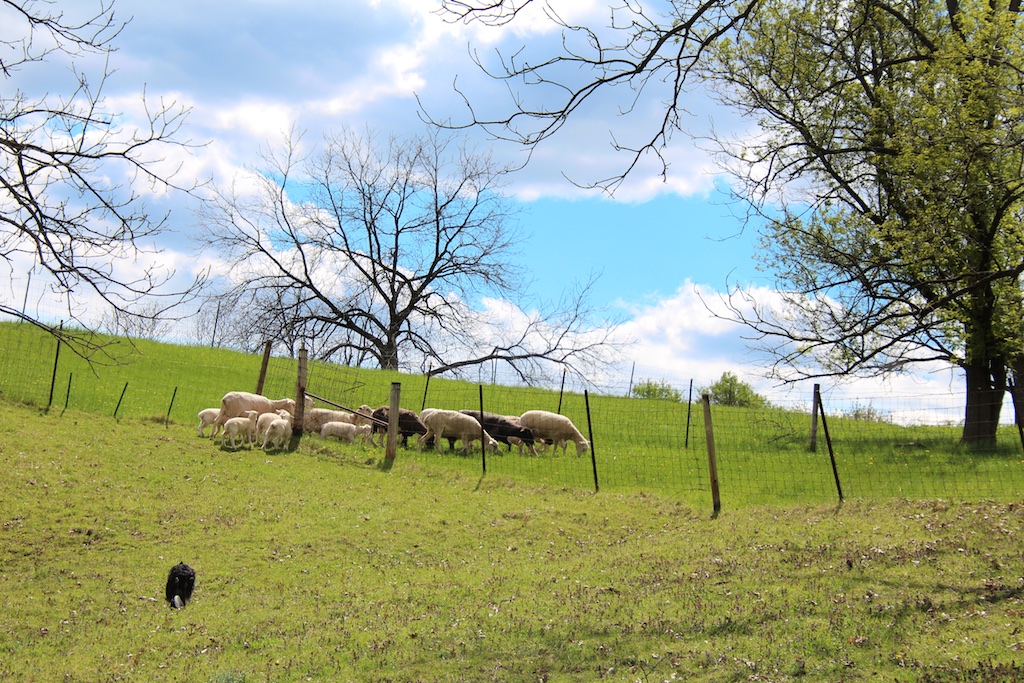 That’s it for today. Hope to see you in Vashon island if you can make it. If you do, please be sure to come up and say hello.