Welcome to an ongoing inquiry about the behavior of people and dogs.
Blog Home >> Animals and the People Who Love Them >> Tired Dog? Good. Overtired Dog?. . . Not so Good.

I can’t begin to count the number of times I’ve heard “A tired dog is a good dog.” We all know the point is that under-exercised dogs often get themselves into trouble… chewing, pacing, or pondering ways to get online and order dog toys with your credit card. True, as far as it goes (except perhaps the online part). However, I also can’t count the number of times a client came in with a tragic story about the “best dog in the world” who snarled/lunged/bit at a child/neighbor/other dog after a long day at the dog park/picnic/family reunion. 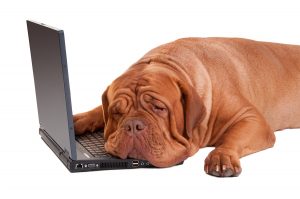 The fact is that dogs can become over tired, just as we can. And just like us, dogs can lose their ability to be their “best self” when that happens. There’s no reason we should be surprised at this, but the concept often seems to surprise people, even those who deeply love their dogs and care for them in a multitude of ways.

Some situations seem obvious, once we acknowledge that even the best dog can lose patience if it is tired enough. For example, say a dog has been at a family picnic for three hours. Imagine lots of little children playing, screaming with joy and excitement, uncles who throw the ball five times longer than the dog is used to, lots of petting, requests for tricks, etc. Dinner is over, everyone is talking and enjoying the sunset. . . This is when I want someone to take that dear, patient dog and put her into a back room to sleep, or into the crate in the car, or wherever she will get some quiet time, BEFORE the three-year old crawls under the picnic table and grabs her head in his hands.

This knowledge that dogs too lose patience and self control when tired is more than common sense. There is some solid research to back up our experiences with over tired dogs: See, for example, the research on Self control depletion that shows both people and dogs have a limited amount of energy to control their impulses. 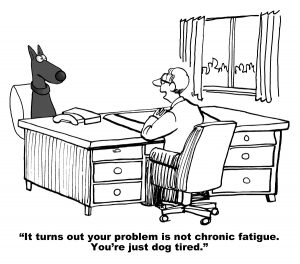 Other situations are not always so obvious. Here’s an example from my own dogs: Recently I was working Maggie at a friend’s, and after just a few minutes of work she began mixing up her “go right” and “go left” whistle signals. I said “She does that when she’s tired,” and my friend and sheepdog trainer, someone with lots of experience, said “But she hasn’t worked that long, she couldn’t be tired.” At first I answered that she’d lost condition when I was away, but it’s not just being physically tired that depletes Maggie’s ability to simultaneously  focus on the sheep and respond and respond to my signals. That’s a kind of multi-tasking that all sheepdogs have to learn to do, but it takes a lot of mental energy when you’re throwing signals at them every few seconds, when a dog can tire out quickly. Maggie has improved a great deal, but she still gets confused on her whistles after practicing precision driving for awhile (and thus lots of directional signals, or “flanks” as they are called), and I’m learning to switch to verbal signals when I think she might be mentally overwhelmed. (Whistle signals are easier to hear from a distance, but have been harder for Maggie to learn than verbal ones. That’s not true for all dogs, it’s just true for her.)

I gave that example because I think there are many situations in which dogs don’t behave up to our expectations because they are over tired–whether physically or mentally. Many examples are obvious once one learns to consider the dog’s energy level, like a dog at a noisy, busy picnic. But others are not so clear, and I suspect that the more we all read about contexts in which a dog’s energy level interfered with being his or her “best self,” the better we’ll be at sympathizing and helping the dog through it, rather than getting angry because the dog was “disobedient.” Or heaven forbid, “being dominant.” Please add in your stories and examples from your own dogs–the more the better. I look forward to hearing from you about your own experiences. (Hey, why limit yourself to dogs? How about times you were over tired and. . . )

MEANWHILE, back on the farm: Back again from being away at Maggie’s last sheepdog trial of the summer. And my how timely, given the topic of the post above–Is my being tired from my nasty chest cold a good excuse for sending Maggie through the WRONG panels on the first leg of her drive after a darned near perfect outrun, lift and gather (47/50 points)? Ah, my, well, let’s use that as an excuse. Once I realized my mistake, we both were discombobulated, but I was pleased that the two of us eventually managed to pull ourselves together and she did a pretty nice cross drive and was finishing the drive when we ran out of time. The good news is that I know we have to work on this winter: My brain being engaged while running the course, Maggie listening under pressure on the drive, and learning that she can shift rude, pushy sheep.

One of the reasons I trial is because it forces me to get better at doing something I love, but another reason is because it’s often just so flat out beautiful. Here’s one of the competitors moving sheep back onto the main part of the course. It was a tad chilly, but overall it was a gorgeous fall weekend.  Thank you Margaret, Pattie, Gordon and all for putting on another great trial. 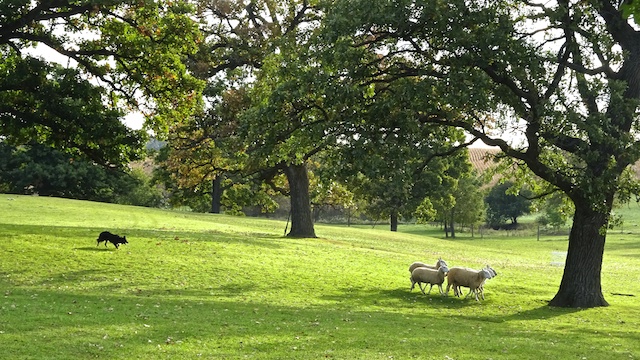 Here’s from the farm this afternoon–look how big the lambs are! That’s Lady Baa Baa on the left, and her two lambs in her right. The handsome lunker in the middle is her ram lamb. 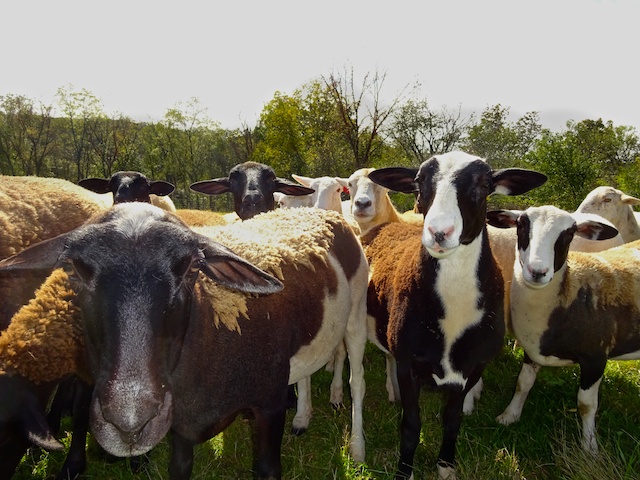 « First look at my memoir: The Education of Will
Sheepdog Heaven »