Welcome to an ongoing inquiry about the behavior of people and dogs.
Blog Home >> Animals and the People Who Love Them >> Tom Turkey (& Okay, a Sale)

So Katie Martz, Client Services Coordinator at McC Publishing, came into my office this afternoon and said: “You’re going to hate me for asking, but would you mention the sale on your blog?” She knows that 1) I’d rather not mention business-related things on my blog and 2) that people really do appreciate hearing about a sale, and 3) I’d rather have a trust fund to support myself and my staff, but one is not forthcoming in the near future. Given all that, here’s official notice that 1) I could never hate Katie (she’s absolutely a joy to work with and, besides, what would I do without her?) and 2) There’s a March Madness sale on at McConnell Publishing for 20% off of everything, good through this coming Friday (March 23rd) at midnight. I hope it comes in handy for some of you.

Here’s my other news: (or Why Does the Title Say Tom Turkey?) FaceBook readers know this story, but I know everyone on the blog doesn’t read FB so I thought I’d relate it here. Last Saturday, Jim, me, Willie and Tootsie are in the car driving back from the market. Our plan is to spend most of Saturday cooking and cleaning for the Univ of Wisconsin vet students coming out to learn to do ultrasound pregnancy checks on my flock. Dr. Harry Momont of UW is a reproduction specialist, and each year the Ruminant Club comes out with him for ultrasound training, good conversation and my homemade pie. I wanted to make them a nice lunch too, so we were on our way home from picking up what we needed for Sunday’s lunch. (Menu = home made chicken salad made from one of our local, grass-raised chickens; cheese, kale and roasted tomato sandwiches with home made bread for the vegetarians, and most importantly, home made pie (this time a mix of strawberry, cherry, black raspberry & rhubarb).

We’re almost home on a local busy highway and run into a traffic jam. Cars are slowed because smack in the middle of the road is a turkey. He’d been hit by a car, but his head and neck were up, his eyes alert, and a string of cars veered around him as we approached. This was not something I could just drive by and forget, so I asked Jim to stop, and he pulled over right away. Extremely mindful of the danger (it is very dangerous to walk into the middle of a highway, please keep that in mind if you are in a similar situation), Jim took one side and I took the other and we stopped traffic completely. Thankfully everyone had already slowed down, so it wasn’t too difficult or risky. Then Jim, another man and I attempted to capture Tom. To our amazement, he stood up and woozily began to walk. So we herded him off the road into an adjoining corn field, and because he seemed pretty spry, decided to leave him there to recover. But as we walked back to the car I found myself unable to drive away. After we left he had crumbled down into the field, and was lying in the hot sun. We knew he was badly injured, but he seemed to be a long way from death, and I just couldn’t bear the idea of leaving him there to suffer.

“Jim….,” I began to plead. “I just can’t leave him there, can we go back and get him?” Without an eye roll or objection of any kind, Jim stopped the car, and we went back with a blanket to catch him. We had little trouble this time, Tom Turkey was not able to outrun us. His injuries were starting to catch up with him. While I cautioned Jim about the danger from his feet (huge nails for digging in the ground), he swooped a blanket over him and we paraded to the car. (Notice my brave, supervisory role here.) My biggest worry was getting Willie out of the car and putting the turkey into his crate; ever since Willie’s injury and treatment he’s been less obedient about not leaving his crate until I say. (He HATED me picking him up and carrying out of his crate, which I had to do for months.) He is much better now, but I wouldn’t say 100%, I’d say maybe 95% reliable. That wasn’t good enough now that traffic was screaming along at full speed right beside us. I told Willie to stay (and yup, I guarantee I repeated myself just like we’re not supposed to), while I pried open the crate door with my heart in my throat. He did stay, bless him, but I kept the door almost shut while I wormed my arm inside, took his collar and held on while he jumped out, pretty much into the wing feathers of Tom Turkey. I wish I had a video of Willie’s face when he discovered the turkey. Or maybe of the turkey’s face? Within about one second or less, I got Willie off the road and into the back seat of the car, (smack on top of Tootsie who was in a body harness attached to a seat belt), I lost my perscription sunglasses and Jim got the turkey into Willie’s crate. Everyone got re-arranged, the turkey settled down in the crate, Willie got off Tootsie’s head and we searched unsuccessfully for the sunglasses, then gave it up and drove home.

The rest of the story is a bit sad, but perhaps predictable. We took the dogs home, took Tom Turkey to a Wildlife Rehab Center in Madison, who promptly told us that Tom was too badly injured to save. I wasn’t surprised, I had heard him begin rattling with every breath on our trip into town. So we gave them the go ahead to euthanize him, and drove home again. Facebook readers have been so incredibly kind about what we did, but as I mentioned there, we did this as much for me as for the turkey. I just hated the idea of him dying a long, pain0-filled death. And as a zoologist, I should mention that in some ways it would have been better to leave him for the coyotes and hawks. They need to eat to after all. Perhaps it might have been kindest to kill him by the side of the road, but I didn’t know at that time how badly he was injured, and it’s probably not even legal anyway.

So we tried our best, and the house & barn got cleaned, and the food got cooked, but the dogs never got brushed. And, of course, I had planned to do a good grooming of the dogs on Saturday, but it never got done. Heaven only knows what the vet students thought. Ah well, what’s more important, an injured turkey or groomed dogs? So here’s to Tom Turkey, who made it through the winter but not the spring. The cycle of life… and so it goes.

Here’s a photo of Tom before he was euthanized; A handsome lad he was: 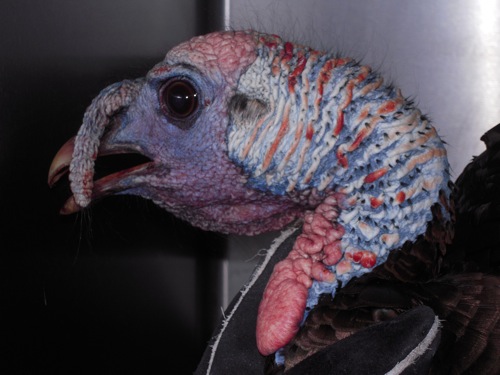