Welcome to an ongoing inquiry about the behavior of people and dogs.
Blog Home >> Animals >> Too cold; Feed the birds

It was 26 below this morning on the thermometer by the kitchen window, 36 below at a neighbor’s. I suspect the temperature in the barn, which is down the hill from the house, was somewhere in between. Good grief. I was born in Arizona, and the concept that it is MUCH warmer in the freezer compartment of my refrigerator than it is outside just doesn’t compute. It seems so very, very wrong.

Lassie couldn’t handle it at all. I took her out this morning, hoping she could urinate or defecate in seconds, but she stood outside for a few seconds and than ran inside and pooped on the dining room floor. She looked up at me while she did so as if she was concerned about what she was doing…. Am I being problematically anthropomorphic for thinking she felt unease about going in the house? (She has urinated in the house several times over the years, usually associated with her off and on again bladder infections, but never pooped.) Of course, I said “It’s okay Lassie, you’re a good girl.”

She truly can’t handle this weather… a few days ago, when it was a balmy 5 below, she ran outside for a few yards enthusiastically, and then stopped in an unnatural posture and stood still.  I called her to come and she continued to stare at me with a strange look on her face.  I ran over to her and she honestly seemed as if she was ‘frozen’ in place. I don’t think she could get her legs to work, so I nudged, half carried and coaxed her back into the house. Poor old girl. At least 3 people have died here because of the weather in the past week; two whose cars broke down and one poor woman who probably fell and couldn’t get up. I have to admit that this weather feels scary, in a primal, down-deep kind of way. Perhaps that is why this weather is tiring me out so much, even though I am only out for short periods of time. Everything seems harder now, and I find myself not wanting to work or think seriously about much of anything. Eating, cooking:  yeah, that’s what I should be doing.  Emphasis on the eating part…

Even Willie was affected this morning. Until then he’d seemed oblivious; no, that’s not right–I’d say more like overflowing with enthusiasm. This is the dog I can’t work in summer if it’s over 75 degrees, he is so heat intolerant.  But lately he’s never seemed happier.  15 below? Yeah, it’s finally cool enough!  Wheeeee, let’s play some more! But even Will started picking up his paws as soon as we went out this morning, so much so that I didn’t even take him to the barn with me. Andrea, the Marketing Coordinator here in the McConnell Publishing office, took her little dog Zooey out this morning and Zooey’s paws were so cold she shrieked and threw herself on her back with all 4 paws sticking up in the air. Andrea of course picked her up (luckily she’s small!) and ran her inside so warm her up. With apologies to  Zooey, it’s hard not to laugh thinking of her throwing herself on her back to get her paws off the snow. Surely even dogs know how to be drama queens.

The sheep are okay, amazing animals that they are. I am feeding them huge quantities of hay and supplementing the twin lambs with goat milk. The hardest part is getting water to the lactating ewes. The main flock has a big water tank with a heater in it, but the ewes w/ lambs are in small pens in the barn with rubber water buckets. This morning each bucket had over 4 inches of solid ice in it… takes no small amount of energy to smash it out and replace the water. I run back and forth from the office to the farm to get them fresh water at least 5 times a day… you just can’t let a lactating ewe run out of water, not unless you want  her milk production to decrease and that’s the last thing the lambs need. The single, White Dude, seemed his usual bouncy self this morning, but the twins seemed a little hunched and quiet. I think this weather is borderline for them. Thank heavens Jim built them such a cozy den out of straw bales; I suspect it may have saved their lives last night.

Speaking of feeding the birds, if you do live where it’s cold and you put out bird seed, you might be interested in the research of Stanley Temple and colleagues here at the University of Wisconsin. They found that during normal weather supplemental feeding has little effect on wild bird populations, neither helping nor hurting (unless you allow the feeders or seed to become rotten or dirty and convey disease). However, in weather like this, feeding birds high fat seeds like black oil sunflower seed, thistle or suet actually decreases mortality by 50%. That’s a huge number, so I am keeping the suet and seed feeders as full as I can.

It’s supposed to moderate tomorrow, thank heavens. I truly am ready. It’s only 4 right now, but the wind is up and it feels brutal.  Predictions are for temps in the 20’s tomorrow… I can only imagine how warm that will feel! Meanwhile… it’s gorgeous outside (especially if you are inside, looking out.) 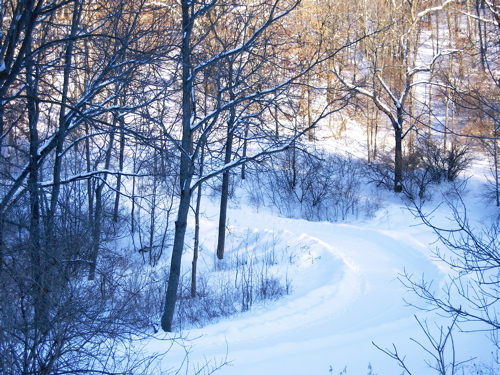 « Willie versus Redford, Round 3
Lambs Thriving, Dogs Playing Is Warming My Heart »