Welcome to an ongoing inquiry about the behavior of people and dogs.
Blog Home >> Animals >> TOOT TOOT TOOTSIE, HELLO!

Little Bit, Mini Me and my favorite, Mop of the Woods.

There’s a new kid on the block, or at the farm I should say. Meet Tootsie, a 7 year old King Charles Cavalier who was rescued by Lucky Star Cavalier Rescue from an Amish Puppy Mill, after the owners had used her up. Her mouth and ears were horribly infected; she had twenty teeth extracted.  She also was fat as a tick, so you couldn’t say she was starving. She weighed 22 lbs (now she weighs 15 and is still a bit overweight).

And what, you might ask, is a Cavalier doing at Redstart Farm? Doesn’t every farm need a Cavalier? (What, you think we farmers don’t have laps?)  Seriously, there is logic to all this. Here’s a brief version of the back story:  If you have been following the blog for awhile, you know that after Lassie died I had my heart set on getting back up to 3 dogs–Willie, a little lap dog from a shelter or rescue, and another Border Collie. I had wanted the lap dog first, but then a litter of BCs came along that looked too good to pass up, so last summer we raised Hope, a Border Collie pup with great herding lines.

It’s a long story, as you know if you followed the bouncing ball last year, but it turned out that Hope and Willie brought out the worst in each other, and I decided it was in both of their best interests to place Hope in another home. It was a brutally hard decision for me to make, and I was roundly criticized by some for it, but I did what I believed to be right for both of the dogs, took some deep breaths, and went back to looking for the next dog. If you know Willie’s history (extremely uncomfortable, and at one time aggressive, to unfamiliar dogs) you know that picking the right dog for him was a challenge, and not as easy as it would have been with any other dog I’ve ever had. But early in the year, a dear friend and I found a little fluff-ball-oxytocin pump from a rescue who sounded perfect, and was about to come out to the farm when Willie was badly injured.

And so, the next dog was put on hold for many, long months while we worked through Willie’s injury in February, his surgery in May and his first 5 months of PT. Once Willie was able to have a bit of off-leash time I began looking again. One of the places I looked was at Cavalier rescue, because Willie has had some great experiences with them. One of my sitters has two females who come to the farm often, and Willie gets along beautifully with them. In addition, one of his best friends when he was younger was Brody, a sweet little male Cav, who used to love to wrestle play with Willie on the living room floor.

After consultations with two wonderful women in rescue, Nancy and Leslie, and two super rescue groups, Lucky Star Cavalier Rescue and Greater Chicago Cavalier Rescue, we all agreed that Tootsie might be a great match. She is a small female (least likely to make Willie nervous), quiet (good again), deferential to Willie (good again) and great around cats (and yet again). After a trial period Tootsie became a  permanent member of Redstart Farm and I can’t tell you how happy it makes me. She is great for us–she does need a lot of training, but she’s going to be a good, good little dog, and will fit in well. It also feels good to finally be able to bring a needy little dog to the farm. I’ll talk in a later post about how this adoption relates to my concerns about the problems that occur when breeding dogs for our sake rather than for theirs, but for now, it’s all about integrating Tootsie into the farm.

As you can imagine, Willie’s feelings about all this are paramount to me. I am happy to say that so far things are going well, given how little time has passed. She and Willie are not buddies, and I don’t know that they ever will be. But that’s okay; he can’t have a playmate now because he is still on a great many restrictions, so I couldn’t bring in a dog he wanted to play with. At first he was a bit uncomfortable about her in the house, but less so than he normally would be with a new dog in the house. Willie does well with unfamiliar dogs in the great outdoors (a huge change from his behavior 2-3 years ago) but he is nervous with new dogs inside the house. As expected, he was not 100% comfortable with her in the house at first, although he was still pretty darned polite. Mostly he made what I call “snake face,” hard flat eyes, flattened ears and a sour look that made it clear he wasn’t thrilled with the addition. But he was appropriate, and in very few days he appears to have accepted her presence. He still seems happy and relaxed and seems to think of her as part of the ‘new normal’ of life.

Of course, I’ve worked hard hard hard on counter conditioning him around her getting food and petting, and now he’ll even let her eat out of the same plate when they get snacks after our dinner. Resource guarding was one of my primary concerns with Willie, and that is going extremely well so far. She pushes in between us for petting and he puts up with that too, although he clearly doesn’t like it. Who could blame him? She’s the one who needs work here; she is super pushy and will be learning some manners soon. (Thus the name, Mini Me.)  A good sign I think: he is starting to sneak in sniffs when he can, as if pretending he just happened to find his nose in the area of her belly and groin. “Oh my, did my nose end up under your tail? I have no idea how that happened.”

She, on the other hand, pretends he isn’t there. She is an especially small Cav (her legs are ridiculously short) and he must look like a giant to her. I suspect they will become more and more comfortable together, and who knows, maybe they will learn to be buddies. It’s very very early …;

I’ll write updates about how things are going when I can. Weeks one and two have been all about:

1) House Training: She is a mill dog after all–but Leslie at Lucky Star made a GREAT start. I took her out every 10 min for the first 2 weeks. Seriously. She is still in shock that she gets a treat every times she pees. She’s doing great, but I am still on it all the time.

2) Teaching her to respond when I say Tootsie. That was her name when she was in foster care, but she had no idea what it meant when I said it. Around day 15 she literally had a Helen Keller moment when (I think) she realized that the noises I made meant something. I would give a lot to have had a video of her face when she made the connection.

3) Leash Manners: Not charging away at 20 mph when on a leash. I never trust her off leash now, so we worked hard on teaching her to stay close to me when the leash is on. It’s taken a lot more treats, but she’s making fantastic progress.

4) Barking: I was warned she barked in the morning at 5:30 until she was let out of her crate. Oh my, not good for me and Willie and our super sensitive ears. We’ve worked very  hard on this too (began by setting the alarm for 5 am, then slowly later etc etc.) She does NOT bark in her crate in the morning (the goal is no crate at all, but the house training issue with a mill dog takes priority) YEAH! But she does bark at other times when she wants out, sounding something like a huge, operatic mouse. We’re working on it and she’s making progress on that too.

Best of all? She is super friendly and is much less shy than most mill dogs. She loves people, men and women both. She has some health challenges; a minor heart murmur and subluxated knee (also minor), and of course there’s her heart to worry about given that she’s a Cav. I don’t know how long her life with us will last, she is already seven years old, but she’s found a home at Redstart Farm, and in my heart forever. 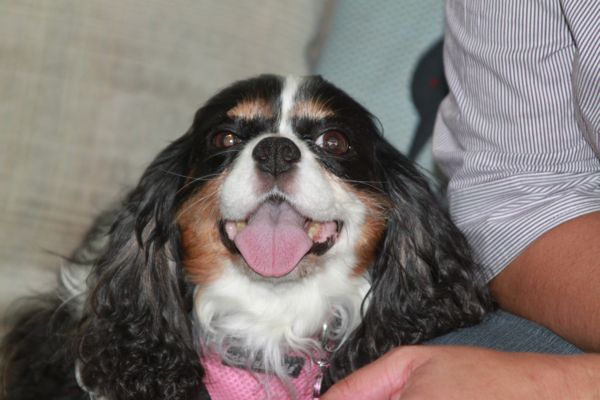 And on one of her first walks in the country, my goodness this exercise stuff can tire a girl out! 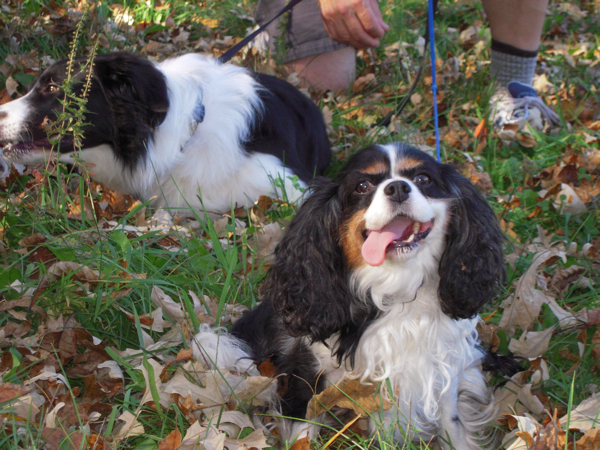 « Hi from the Madison Seminar
What Emotions Do You Share with Your Dog? »