Welcome to an ongoing inquiry about the behavior of people and dogs.
Blog Home >> Animals and the People Who Love Them >> Travelogue 1: London & First Talk in Milton Keynes

Is there a more wonderful city in the world than London? You know I’m not a city girl, at least I’d never want to  live in one, but I love visiting vibrant cities, and surely London is one of the best.  The only city I can think of that could compete with London is Sydney, Australia. Sydney has the best views, but London has the best architecture by far. What fun; I wish I could come back somehow without leaving the dogs. (Let me know if you figure that one out–but no, I’d never ship them. I’d be a wreck worrying about them.)

We stayed at a Bed and Breakfast in Chelsea that defines “English charm” in the best of all possible ways, visited with my English cousins, and spent the day Monday traipsing around the city. Actually, that’s not quite accurate. We spent most of the day at the Museum of Natural History in the dinosaur exhibit. If you get to London, and you are at all interested in animals and zoology, this is a Must See. I give the curators my highest regards for creating such an interesting, relevant and biologically sound exhibit. Beyond the crazy impressive collection of standing dinosaur skeletons, and beyond the dramatic and realistic re-creations of full-fleshed, moving members of several different species (the T. Rex exhibit is the gold standard of same), what I liked best was the exhibit’s comparison of the vast diversity of dinosaurs with that of today’s mammals. From herbivores (food easy to get, hard to digest) to carnivores (food difficult and dangerous to get, but easy to digest), from solitary species to pack hunting wolf-like dinosaurs, the entire exhibit is a biology lesson in adaptation and the interplay of environment and behavior. Brilliant. The exhibit makes it clear that dinosaurs were the equivalent of today’s mammals 65+ million years ago. (My university major professor Jeffrey Baylis used to joke: Don’t worry too much about things–the age of mammals is almost over anyway.)

Here’s a re-creation of a nest of dinosaur eggs, complete with hatchlings emerging from the shell. You can almost hear them start to squeak. (Did they squeak? Who knows? One exhibit showed a species with an elaborate air filled structure on its head that looks as though it was used as a resonating chamber. How cool.) 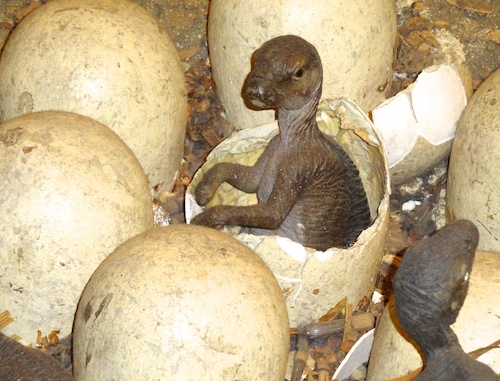 And here’s me in front of a giant sloth skeleton (an extinct North American mammal). No comment about the choice of animals that I paired up with. 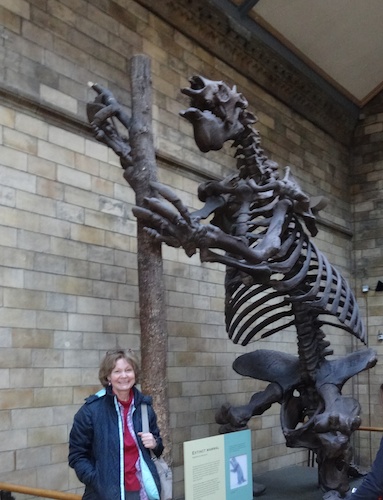 Later in the day we hopped the quintessential British double-decker bus and found our way to Neal’s Yard, a tiny shopping area my friends had suggested as a “must see” that most Londoners had never heard of. We finally figured out it was in Covent Garden, wended our way through a massive flea market, lines of street performers and throngs of other tourists and found ourselves in a tiny triangular courtyard surrounded by shops called things like Hair by Fairy. Our raison d’etre was The Neal’s Yard Dairy, a shop selling some of the best cheese in the world. Either heaven on earth, or a lactose-intolerant nightmare, this tiny shop made me want to try a sample of every single cheese they displayed. We “oooo’ed” and “aaaah’ed” our way through samples from all over the world, and finally selected a lovely Irish Collea cheese and a creamy chevre for relatives and hosts. 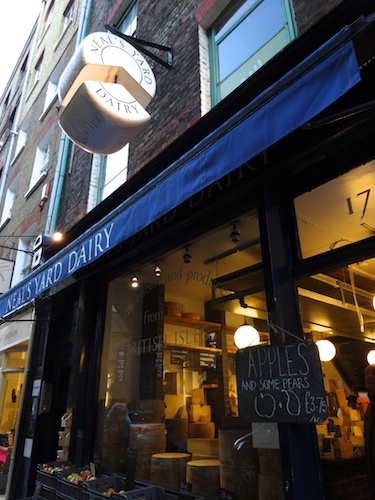 Yesterday we took the train to Milton Keynes and I gave my first talk last night for the Association of Pet Behavior Counsellors. True confessions: I was quite nervous (“quite”? Do I sound British already?). I’ve had a ridiculous amount of technical difficulties in the past week, including none of my talks playing at all, my Kindle breaking (it’s officially dead) and raft of computer problems too endless and boring to mention. What a relief to have the talk go well! Best of all was the audience and some of the APBC members. The audience could not have been more delightful, they made it great fun. I was speaking about “The Internal Life of Animals,” a subject I dearly love, and they seemed to share my enthusiasm. Thanks especially for APBC Board member Karen Wild for her warm welcome.

Today it’s on to Newcastle for another talk tonight, then a tour of the Waltham Foundation on Thursday where I’ll give a short lunch-time talk, and then the final English speech on Friday night in Bristol. English blog readers be sure and come up and say hello, I’d love it. Then it’s four nights in a tiny cabin in Wales, just me and Jim.  Ummmm. Lots of hiking and eating and hiking and more eating. They will have to ship me home on a cargo plane, because I suspect that eating will trump hiking every time. (Best kept secret: The food in England is fantastic.) I’ll keep you posted  when I can on all our adventures, the next blogs will continue to be travelogues from the UK and then Germany.

« “The Laugh’s on Me” Story Contest Winners
A New Photo Contest! »