Welcome to an ongoing inquiry about the behavior of people and dogs.
Blog Home >> Dog Behavior >> Unexplained Fears & Lambs Coming Out of Our Ears

I’ll be working on a post about social status and dog training this week, keep your eyes peeled. Meanwhile, something happened on Saturday that related to our discussion about fears . . .

I mentioned last week that Willie has become fearful of being in the bedroom with me at night. He is better, although he still leaves the room when I get into bed, but he is not slinking out anymore as if he saw monsters sitting on my shoulder. (And yes, by the way, it appears that whatever scared him is associated with me–all of his tongue flicking and slinking was directed toward me, but only once I get into bed. The issue seems to be specific to Trisha + Bed = Scary. (Oh lordy, one could construct a lot of jokes out of that. Sigh.) Speaking of unexplained fears, here’s an explained one that might shed a little light on the ones we can’t figure out.

On Saturday a dear friend came to visit from northern Wisconsin, and after driving 4 hours let her Akbash, her Golden Retriever and a Lab she is babysitting out of the car to relive themselves. Unbeknownst to us, my cat Sushi was sitting on the porch, and the Akbash and GR took one look at her and began lure coursing with her as the rabbit. Luckily she was only about 30 yards from a tree, and she got up it when the dogs were only a few feet away. She must have climbed 25 feet up, but got herself down within a few minutes once it was safe. (We didn’t see her come down, we were busy rounding up loose dogs at that point.) We found her soon after, shaken up and with what looked like a minor eye injury, but otherwise still intact. However, she clearly had been terrified, and for the next 48 hours she panicked every time she saw Willie. Now, Willie had been in the house, and had no part in chasing her. But he’s a dog, and apparently that was enough to set her off.

Fears are like that: When we, or any mammal, is truly frightened, the change in neurochemistry in our brains creates a state of hyper awareness. It is as if the brain is saying “I need to pay attention to everything, because I don’t know yet what it was that related to the danger, so I’ll take it all in and sort it out later.” In the famous story told in all animal behavior classes, an entomologist who was struck by a car in a pedestrian cross walk can still tell you the species identification of all the insects plastered onto the grill of the vehicle that hit him. Apparently he’s never felt the same way about moths again. The downside of this hyper awareness is that we can develop conditioned fears to things that had nothing to do with the actual trauma or injury. In Sushi’s case, it made some sense: Willie wasn’t anywhere near her when she was being chased, but he is a dog after all. But the association can be illogical and meaningless, and still have tremendous power. We can get nervous when we hear the song that was playing on the radio when we had a car accident, or our dogs can associate us with something that happened in our presence that had nothing to do with what scared them. But we were there, and sometimes that’s enough.

As readers have wisely commented, it could be related to smells (I think that is often over looked in dogs, because we as a species are so oblivious to scents), or sounds that we can’t hear ourselves. I think it often has to do with pain; I’ve seen many clients whose dogs had an abrupt injury and associated their owners or another dog with it. I also wonder about barometric pressure, stray voltage (I had a case of “Separation Anxiety” that turned out to relate to a huge power surge by a nearby power generating plant right next door) and who knows what else. Temple Grandin talks about a horse afraid of anyone with a black hat on, because the man who beat her wore a black hat. I’ve had clients whose dogs were afraid of anyone who smelled like pepperoni (abusive pizza delivery man), anyone with bushy, blond hair (who knows why!), and Hereford cows (not Holsteins) because the dog was looking at Herefords when he got hit by an electric fence. Sometimes we can figure out the association, sometimes we can’t, but it does help a bit to remember that the association is often illogical.

Meanwhile, back in the barn: Lambs lambs lambs. On Saturday morning, Truffles had triplets. She’s a 4 year old ewe who has always had 2 great lambs every year, but this time she had triplets, 3 little lambs, with 2 of them marked like Border Collies. Her cousin Snickers looked like she would lamb too, having an udder that blew up like a balloon on Saturday morning, and she became less and less interested in food as the day went on. Sunday morning it was clear she’d been digging, a sign of early labor, and she even left a rare chance at fresh grass to run back into the barn as if her babies were imminent. But, then . . . nothing. Hour after hour, nothing. Sunday morning it was also clear that Truffles wasn’t producing any milk. Her lambs were hunched and cold, and her bag was hard as a rock. Thus, much of Sunday was phone calls to the vet, visits to pick up goat milk, teaching the lambs to nurse out of a bottle, picking up medicine at the vet clinic, herding the flock with older lambs onto the front lawn for their first fresh grass in weeks, herding them back into the barn and taking the lambless sheep onto the front lawn (pasture isn’t grown up enough, needs to be rested), massaging Truffles’ bag with warm towels, feeding the lambs every few hours . . . (Don’t take any of this as a complaint. Except the worrying part, I love lambing season and was so grateful that I was home and not needing to work most of the weekend!)

Late Sunday afternoon, just when I was getting truly worried about Snickers and her blank-eyed, listless look and lack of any signs of labor, Jim, bless him, drove to the vet clinic to get oral calcium that might help her along.  I went into the barn to do another round of cleaning and feeding, and there were 3 little lambs with fat, full bellies, all standing beside Snickers. She had had them all in just minutes, cleaned them up and got all 3 fed in about a half an hour. This morning Dorothy (finally!) had twins, 2 lovely little boys (but wouldn’t you know that’s who I wanted to keep a ewe lamb from, she is my best ewe hands down….), one white and one grey & white. That’s 17 lambs out of 7 ewes. Holy moley. And there is one more to go, Explodo Ewe Barbie. Still no milk from Truffles though. She doesn’t have mastitis, and I actually wish she did. Then I could give her antibiotics and milk her out and use warm compresses and probably pull, her udder and her lambs through. But this hard bag is worse–the bag is full of fluid and the ducts are blocked, and the milk can’t get through. It might resolve in another few days and it might not. If it does, she still might not be able to provide enough milk, even for twins much less triplets. Looks like I’ll be constructing a self feeder soon.

Here are some of the older lambs, with the front runner impersonating a Border Collie. 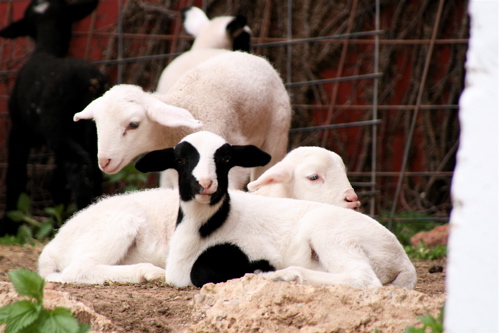 Here are the 9 older lambs (there are 8 others in the barn), checking out Willie. Notice that Lady Godiva, whose lambs are the two in the front on your left, has come over to lure her babies away from the wolf lying in the dirt. She came a little closer, nickered, and her black lamb followed her away. The black and white ewe lamb ignored her completely, and continued to check out Willie, who bless him, stayed quiet and calm throughout. 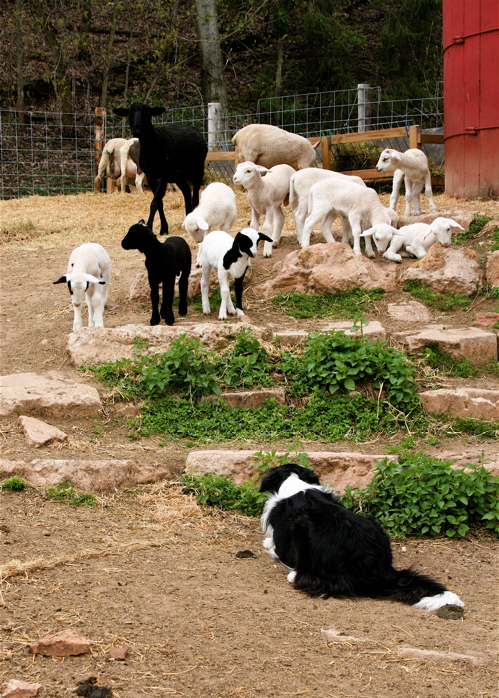