Welcome to an ongoing inquiry about the behavior of people and dogs.
Blog Home >> Dog Behavior >> Using Play to Treat Aggression

The last great talk in the Play Symposium at APDT was a wonderful presentation by Karen B. London. She begin with the belief that play is under-utilized as a reinforcement and tool to treat aggression-related problems in dogs. Several types of behavioral problems were listed as being amendable to using play, including over-arousal, frustration-related aggression, the fear of strangers and reactivity to other dogs.

Dr. London reminded us that play is so useful because it 1) is a high energy exercise that can motivate dogs and channel their energy in positive ways, 2) play is a skill if you think about it, and it can be used to teach incompatible behavior (go get your ball instead of barking at the stranger) and also can be used to help dogs learn emotional control, 3) an increased amount of play can improve the quality of life of many dogs (and their humans too!), 4) play has a positive effect on emotions (there’s some great research on this, see “Affective Neuroscience: the Foundations of Human and Animal Emotions” by Jaak Panskepp and 5) being able to play with their dog as a ‘treatment’ can increase client compliance. This last point I think is especially important. As Karen noted, so many of us see people who are deeply ashamed of their dogs, and who are nervous and afraid of their dog’s behavior. Creating a scenario in which they can channel both their dog’s and their OWN energy toward play gives them a chance to feel happy when they are with their dog–which is, after all, why most of us have dogs in the first place!

Speaking of happy, here’s a happy story! The photo below is a dog who came to the Humane Animal Welfare Society in Waukesha, WI and ended up, for a few hours, at my farm last Saturday. Khris Erickson, the Director of Behavior at HAWS, had suggested that he might be a great therapy dog for a friend of mine. She declined, but I fell in love with “Fluffballs” face, and hoped he might make a good play mate for Willie. (Okay, yes, I am talking about getting a pet for my dog. Will has his own chiropractor, his own chinese medicine vet (well, they are shared with Lassie) and now I’m looking for a dog for him to play with. I know, I know. . .) Truth is, I don’t really want another dog right now, and Will plays at least once a day with Lassie, but it is SO good for him to run run run run with other dogs. He gets to on ocassion, but I know it would be good for him to do so on a daily basis…

And so, Fluffball came to the farm to see if he’d be a good playmate for Will (and me too, I’ll admit…), and proceeded to ignore Will and ignore Lassie and walk on perfect heel, off leash in a distracting woody and pasture environment, beside Khris and I. This dog wanted people people people, he had little interest in other dogs, but was exceptionally sweet and biddable around anything with two legs. I’m thrilled to say that’s just what he got. Andrea, aka “The Book Queen” here at the office, was looking for a dog for her dear mum, and the rest is history. Mum and “Charlie Murphy” are now cuddling together every night, cozy as cozy can be. 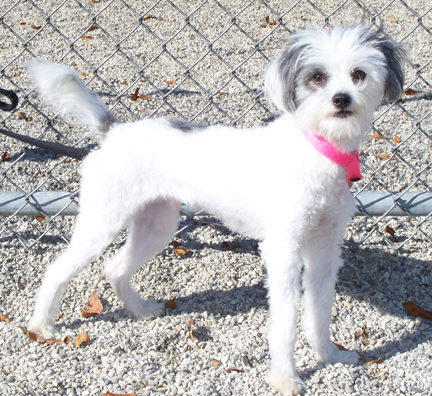