Welcome to an ongoing inquiry about the behavior of people and dogs.
Blog Home >> Border Collies >> Video Analysis: What’s Up with Willie?

Here’s an interesting video for you to analyze. Katie and I were taping one of my favorite signals, “Get Back.” I use it in a variety of contexts, and can’t imagine life without it. You can see some of the ways I use the cue on the video below, and I’ll talk more later, if you’d like, about why I love the cue so very much.

After we taped, Katie and I were watching the video and I said “Oh wow, did you see how he [—] right after [—] happens? (Fill in the blanks!)

And so, that’s your assignment (should you decide to accept it Agent 99): Watch this video and tell us what we might have found interesting in it. I’m giving no more instructions than that… Who knows then what you might find that we didn’t! I’ll jump in early next week (and will answer comments sooner) about what we found so interesting, and as importantly, what we think it might mean. I’m guessing that this could lead to a very interesting discussion!

MEANWHILE, back on the farm: Willie clearly lost some confidence after working the almost immovable sheep at the trial last weekend, so I’ve been working on building it up. I’ve been encouraging him to come up, come on, keep them doggies moving… (This is where you burst into song, singing “Raw-hiiiiiiide” at the top of your lungs.) I’ll let you know how it’s going. Poor Mr. Willie boy, you know how much I love him; and that includes knowing who he really is: A slightly crazy, people-loving, hyper-reactive, sound-sensitive, fun-loving creature who lacks confidence in a variety of settings. I’ve always known he’ll never be a national level sheepdog trial competitor, but I love him more than I can say, and love him even more than that for trying so hard. 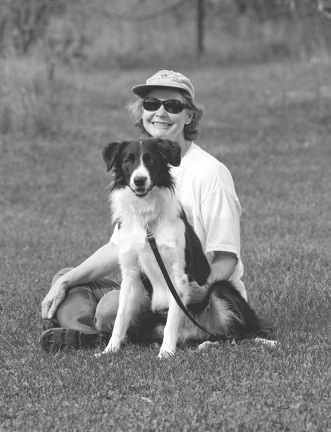 Here’s a photo of me and Willie a friend took (thanks Rich!) several years ago when we were at a sheepdog clinic (the first time I was able to let Willie greet unfamiliar dogs.. what a huge step that was for him!) It’s hard to imagine that he was out of the game for over a year and a half since then!

« Barbie & Willie, Mad Dogs and Englishmen
Willie and Tongue Flicks and What it All Means »