Welcome to an ongoing inquiry about the behavior of people and dogs.
Blog Home >> Animals and the People Who Love Them >> Visits from former owners: Good for Dogs?

A few months ago I got an email from someone with a great question: Would it distress a dog to have his former owner come visit? I’ve been mulling on it ever since, and my answer, of course, is It Depends. But that leads to the question, “Depends on what?”

Although I’m only speculating, I suspect it depends on how settled and stable the dog is in his or her new home. Here are a couple of examples, one from my own life:

CASE ONE–SCOTT: Scott was the son of my first Border Collie, Drift. I loved him dearly, and then I gave him away to another owner. I did that because I was sure he wasn’t happy here on the farm. Yes, he was loved and well cared for. Yes, he got to work sheep and take long walks in the country and enjoy belly rubs at night. But Scott was an anxious dog, and he hated change. I was traveling a lot, had a lot of different farm sitters, and had a lot of visitors–two and four-legged–when I was home. As he matured, he became more nervous about any kind of change. I ran him in sheepdog trials and, every time, his first run was a disaster, but his second run was so good that people thought he was a different dog. Not theoretically, literally.

I finally realized that Scott was deaf in one ear, a condition that is often never diagnosed because dogs who are deaf in one ear can still hear. Scott simply had no idea where I was on a new field at a new trial, but after he’d been around once he knew where I was and could compensate. Like all unilaterally deaf dogs, Scott couldn’t locate sound, and that tends to make them anxious, if not downright paranoid. Very understandable if you think about it–we count on our bilateral hearing to be aware of the world around us at every given moment. Eventually I decided that love was not enough to keep Scott happy in a home where the only constant was that everything always changed. I needed to find him home where he could work sheep everyday on the same fields, and live a life with a predictable routine, with people who cherished him.

It took awhile, but I eventually found him the perfect home, on a quiet, beautiful farm owned by a lovely couple who were thrilled to have a dog to work their large flock of sheep . Even so, I cried so hard after delivering him that I had to pull over on the way home because I was crying too hard to see. But this story has a happy ending. Three days later I stopped over to check in on him. Scott ran exuberantly to me, tail circle-wagging, eyes glowing, dancing beside me full of joy. Then he dashed back to “Gary” (I’ll call him). Right before Scott ran into Gary, he flipped around 180 degrees to face me, leaned his body against Gary’s leg and beamed at me, tail thumping. I’d bet the farm that if he could talked he would have said “This is Gary. He is my new human. Isn’t he great!!”

Three days, that’s all it had been since taking Scott to his new home, before a visit from his former owner. Would I recommend this in most cases? No. Way too soon for most cases. But Scott wasn’t happy at the farm, and I think he was relieved and thrilled to be in a quiet place where he got all the attention, where he could count on a daily routine, and work sheep in the same place every day. (Note: I have no digital copies of Scott, but am working on it. Sorry I can’t add a photo!) 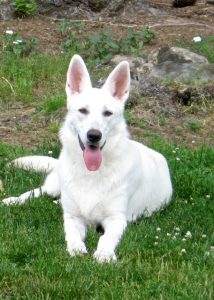 CASE TWO–PEBBLES: Pepples is a lovely, German Shepherd who was adopted by Maggie early last winter. She had taken Pebbles in as a foster, and moved heaven and earth to heal the dog’s several medical conditions. After a few months together, what often happens with foster dogs happened, and Maggie decided that Pebbles had found her forever home. [Update on Feb 19, 2017: I originally called the dog Pepper, in order to provide anonymity to her owners, present and former. But, sad to say, soon after this was posted in January, Pebbles died of an aggressive, fast moving cancer, and Margaret and her former owner asked if I could pass on her legacy by using her real name. Nothing would make me happier. . . ]

Maggie reached out to me asking if it would distress Pebbles if one of her original owners came to visit. This particular owner, I’ll call her Beth, had been forced to involuntarily say goodbye to Pebbles, and was yearning to see her. But would it upset Pebbles? I answered that I thought it depended on how settled Pebbles was in her new home. Did she seem comfortable with her new routine? Happy and contented, or restless and nervous? Of course, some dogs are simply naturally nervous, but usually you can tell the difference between a dog who is in transition (just as we feel when we travel or move) and a dog who is naturally anxious.

Maggie decided it was worth the risk to have Beth come over to visit. Beth, the original owner, hadn’t seen Pebbles in a couple of years, due to a nasty divorce, and she missed her terribly. I’m happy to say that things could not have gone better. Pebbles clearly recognized her first owner, and was happy to see her. However, she showed no signs of upset when Beth left, which was Maggie’s primary concern. (And in case you are wondering: No, Beth can’t take Pebbles back. Not our business why, but clearly not for lack of loving her.)

A couple of other wonderful things happened during and after the visit. Beth finally was able to stop worrying about the dog she loved, and saw that Pebbles was happy in a wonderful, new home. Pebbles also benefited. The insights that Maggie gained after watching how Beth and Pebbles play together has strengthened their relationship. After watching Beth sitting on the floor and playing tug with Pebbles, Maggie began to do it too, and Pebbles soon became cuddlier and more affectionate.

Do all re-homing stories end so well? No, they don’t. Sometimes it’s just a bad match–a square peg trying to fit into a round hole. But, in terms of visits from former owners, I think what is most important is our best guess as to where the dog’s heart is. In Scott’s case, within just three days he was happily relieved to be in a place that felt like a good fit. In Pebble’s case, I think three days would have been far, far too soon. But after she was settled, the visit appeared to be a win/win. Of course, we can’t ask the dogs what they think. We can only do our best by observing their behavior and making our best guesses.

What about you? Have you had experience adopting a dog and having a former owner come to visit? Or been on the other side of it? I know we all wish that all dogs go to their forever home first time, and never have to move. We all also are aware that life is busy making other plans for us. If you do have a newly adopted dog, let me know if Love Has No Age Limit is helpful to you. It’s a booklet that Karen London and I wrote about bringing a dog of any age into a second home. Some shelters, bless them, are giving them away to all adopters.

MEANWHILE, back on the farm. Strange weather, sometimes it feels like January, sometimes like March. Today we’re living in a farm house surrounded by an ice skating rink. A hilly one. If you’ve ever ice skated, you know how that would go. It rained/sleeted last night, and the entire farm is now one big, horrible accident waiting to happen. The sheep went up the hill to graze on dried grass, but now find themselves stuck in a low area that requires going up hill to get out of. I simply can’t help them. (Want to carry each one of them up a steep, ice-covered hill and then carry them down a steeper, icy trail through the woods? No?) They are well-fed (okay, fat) and all I can do is hope that they don’t get too chilled in this horrible weather and can get back down the hill tomorrow. I’m letting the dogs outside on leash only, which has them looking all slumpy and miserable in the house. I’m going out only with yak tracks on my old boots, and even then it still feels ridiculously dangerous. Hopefully it will change soon. It’s supposed to be in the 40’s by Wednesday, which is both a relief and a disappointment. Forty degree weather in January is going to play havoc with animal and plant life. But at least I won’t have to teach the dogs to ice skate.

Ah well, nothing I can do about the weather outside. But I can enjoy the garden that’s blooming inside, which is in full bloom right now. I obsess over it hourly when I’m home. I’m considering buying some new bulbs for February/March. Heaven help me. 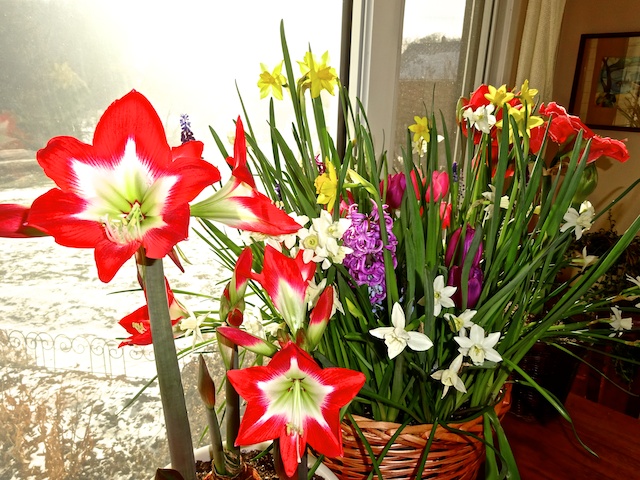 Here’s a close up of my forest of flowers: 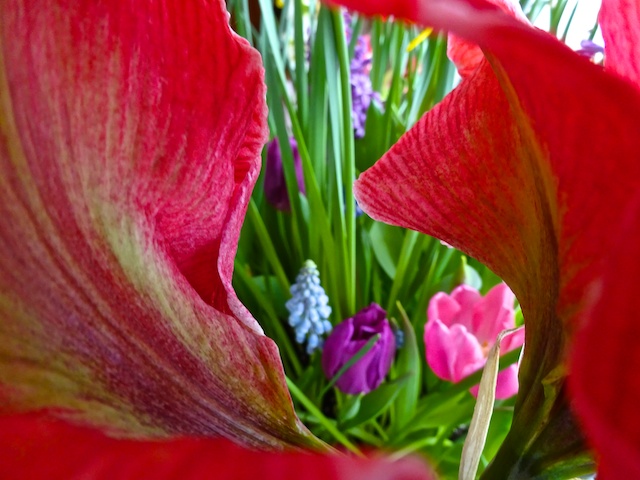 Maggie has given up on having any fun today. Poor kid. It’s a tough life. 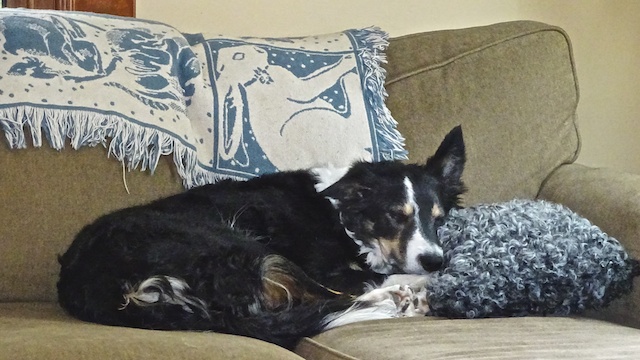 Here’s hoping that the weather is better where you live. And I’d love to hear about your experience with re-homed dogs, from whatever perspective you have to share. Meanwhile, be safe.

« Great Photo of “Hard Eye,” & What to Do When You See It
Resource Guarding, Dog to Dog (Repost) »