Welcome to an ongoing inquiry about the behavior of people and dogs.
Blog Home >> Animals and the People Who Love Them >> Well, Stuff Happens.

That could actually be a great title for a content-rich blog, but I’m afraid the blog I was working on got trumped by 1) the blog site crashing for several hours, 2) Tootsie’s recurrent and unexplained UTI and need for an X-ray, and 3) Nellie the kitty showing up limping and clearly very, very unwell.

Thus, instead of a blog about the questions to ask when someone (like me) says “It Depends,” I’m just going to go right to a report on the farm and the sheepdogs. But keep your eyes out for a blog on “It Depends,” and one on a survey on resource guarding in the near future.

MEANWHILE, back on the farm: Everyone but the sheep and the cats piled into the car yesterday to go to the Laughing Frog Sheepdog Trial in Kansasville, WI. Put on by hosts Tresa and Don Laferty, the trial is designed to be a small, supportive trial that welcomed people and dogs who may not be the “big hats,” but want to learn more about good work with sheepdogs. It was a great opportunity to take Maggie to a first trial, and fun for Willie too.

Who would have guessed that Tootsie would turn out to be the winner of the first competition run? I suggested to Tresa that she radio the judge (the helpful and benevolent Lori Perry) that there was a last minute entry, so Tootsie and I trotted out to take our place at the post. Imagine our surprise when she turned out to be the winner of the run due to some creative scoring! Ha!

Here we are getting “High in Trial” for our efforts. (Tootsie was awarded the only perfect score of the day. Amazing what you can get when you’re cute.

Maggie had three runs. Her first was best described as “Eeeee Hah!” I was hesitant to stop her because she can get sticky, but after being encouraged to push the sheep at Derek Fisher’s clinic last weekend, Maggie came on full bore, and pretty much ran the sheep down the field to me. We slammed our way around the course, but managed to complete some of the exercises with some dignity. We placed second. When I showed Jim the ribbon he said “You’re kidding.” Yeah, it wasn’t exactly smooth.

She kicked butt on her second run. This time the sheep (a different group) began to run down the field like race horses before Maggie was halfway done with her outrun. This time I didn’t hesitate to lie her down. Needless to say, these sheep were fast and flighty, and reactive to a dog even 50 yards away. Perfect for Maggie’s personality, which explains in part why she did so well this time. (I deleted “she was brilliant,” because it sounded too much like bragging. But hey, just between us, she was brilliant.). She stayed far, far back to keep control, listening to my every cue, and was on the perfect balance point for the entire course. Judge Lori generously gave us 97/100 points. (You could get an extra 5 if you pointed out the lead sheep at one point, but my brain is too small to do all that at once.)

Here she is doing the drive. You can see how far away from the sheep she needed to be, any closer and they would have taken off at a dead run. She’s not yet always 100% on her flanks (meaning, “go clockwise” or “go counterclockwise) and she’s not confident yet driving very far, but she did perfectly on this one.  Okay, yeah, I was really proud! 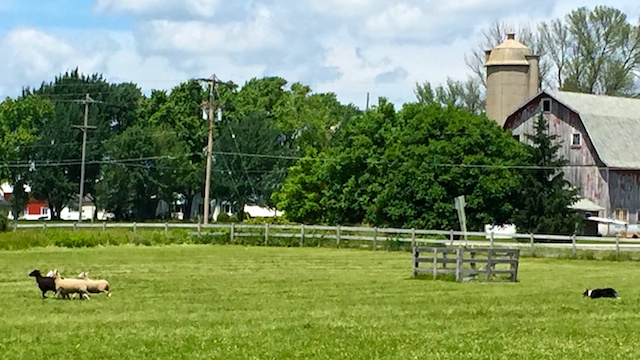 My small brain got the best of us on her third run. The sheep were busy eating grain and instead of letting Maggie do her outrun and get them moving right away, I stopped her at the back (thinking no doubt about the race horse sheep on our previous runs). She got stuck, a common problem for dogs who are “strong eyed, or who make eye contact with the sheep, get them settled and balanced between them and the handler, and stop. Job done. What else would there be to do? This is Maggie’s biggest challenge, and the type of situation in which she needs experience and more help from me over the next months. In this case I walked out to help her and we got things going again, but I knocked myself on my head for stopping her when I shouldn’t have. Hopefully I learned my lesson, and that’s what this trial was about, a good place to practice and learn away from the pressure of the big trials.

Willie got a chance to run also in the ‘non-compete’ class (non-compete because he’s run in bigger trials at a higher level) and had a great time. He’s almost nine now, and I can tell that he isn’t loving the pressure of precision flanking on long drives. But he was in his element, and did beautifully. This time I managed to squeak out who I thought might be the lead ewe, and Lori gave me the extra five points just for remembering, so Willie ended up with 103/105 points. I should be clear that Lori was more than generous, and I can guarantee you that those points would never have been posted at one of the bigger trials, but still. It’s such fun when it all goes so well!

Here’s Willie helping to pen the sheep. The sheep were not pleased about going into a strange, small wooden structure, and it took some work to pen them, but both Maggie (on her good run) and Willie got them penned. 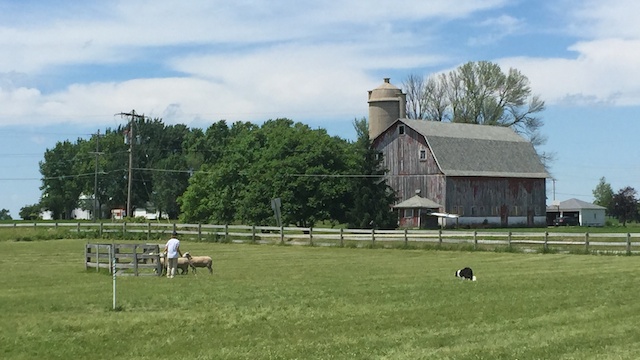 Thanks to Jim for taking the photos, and to Tresa, Don & Lori, along with helpers Nancy and Diane, for putting on such a great trial. And thanks to everyone who attended; it was great fun spending the day together.

And here’s a photo I rather like that I took not too far from our farm. The light green field is an alfalfa field that had been cut a few days before. The hay was left to dry, then gathered up for the dairy cows down the road. 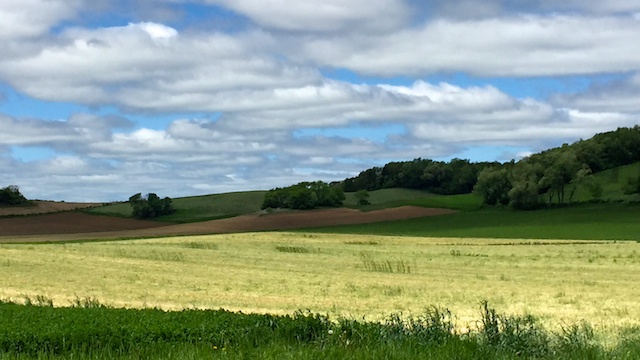 May all your own hay be cut in sunshine… By the way–Tootsie’s X-ray was clear (no stones, but still no answer to the mystery), and the vet found that Nellie had a bad bite on her shoulder. It got cleaned out, she got an injection of a slow release antibiotic, and I am considering tossing out the dog crate pad that she peed all over on the way to the vet clinic. A small price to pay if she heals up well.

« Take Your Dog to Work (or Not?) Revisited
Research on Resource Guarding »