Welcome to an ongoing inquiry about the behavior of people and dogs.
Blog Home >> Animals and the People Who Love Them >> Well, This is Awkward: Christmas Book Ideas 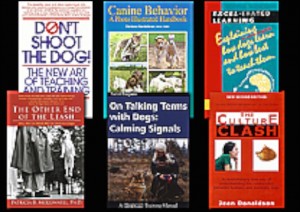 Someone just asked me what book or books they would recommend for someone who wants to learn more about dog behavior. This person’s interest is not superficial, she is serious about studying canine behavior. My friend wanted to buy her some books for Christmas to get her started. What would I suggest, she asked.

I suggested that she look at The Classics on my website, because I compiled it as an answer to that very question. I should note that the entire package of six books a tad expensive, however, and more than a person might want to spend on a gift. If you wanted to send a few books, I’d suggest two. One is Barbara Handelman’s book, Canine Behavior, a Photo Illustrated Handbook. I recommend this book because visual signals are such an integral part of canine behavior. If you can’t “read” a dog, you can’t begin to understand them.

Here’s the awkward part (she writes, taking a breath): The other book I’d recommend is The Other End of the Leash. By, uh… some slightly pudgy Midwestern woman who likes to write about dogs.  I suggest this book, awkward as it feels, because for many of us, the best way into a dog’s brain is by comparing it with ours. Given that it’s not possible to get out of our own brains, the only way I know for us to try to understand members of another species is to compare and contrast their perceptions and behavior with that of our own. Sometimes we do a great job at that, other times, not so much. I realized early on that most “behavior problems” in dogs were problems related to communication between two very similar, but also very different, species. As I say in the book, when talking about how often dogs and people fail to communicate:

Some of this miscommunication, though, results not just from ignorance about how to train a dog but from fundamental differences between the behavior of two species. After all, dogs aren’t the only animal in the relationship. We humans at the other end of the leash are animals, too, with our own evolutionary baggage of behavior that came along on our evolutionary train ride.We don’t come to dog training as blank slates, any more than dogs do. Dogs and dog lovers alike have been shaped by our separate evolutionary backgrounds, and what each of us brings to the relationship starts with the heritage of our natural history.  Although our similarities create a bond that’s remarkable, we are each speaking our own native “language,” and a lot gets lost in the translation.

I should be clear that this is not a dog training book, so don’t look to it for that. It may have an effect on how one trains a dog (I hope), but it’s not a step-by-step how to book. Right now I’m looking at the bookshelf in my office, where I can see copies of the book in 14 languages. Surely there is little more rewarding to an author than knowing there are people in China, and Poland and Finland reading what they wrote.

There are so many other wonderful books out there as potential presents for dog lovers. I’d suggest books that are memoir-ish, page-turning stories for the long nights of winter, books like Cat Warren’s What the Dog Knows,  Susannah Charleson’s books, Scent of the Missing and  The Possibility Dogs, as well as Merle’s Door by Ted Kerasote. I love so much of what Suzanne Clothier writes in Bones Would Rain from the Sky (including the brilliant title), and I’ll repeat my rave review of Alexandra Horowitz’s new book, Being a Dog.

There are a gazillion other great books out there–I’d love to hear what you are giving to your dog loving friends. (Or what you’d like to get yourself?) My ears are pricked.

MEANWHILE, back on the farm: Snow! Yay! Finally, the yes-it’s-nice-it’s warm-but-this-is-getting-creepy weather is over. Really, it’s not okay to have it this warm up here in the north. Many of my bulbs were coming up. That’s a potential disaster in spring, because bulbs can only store so much energy during the spring and summer. If they use it up in fall, or send up flowers shoots in winter, then no flowers in spring.  And you know how I love flowers.

That’s why I was so happy to see the snow early  Sunday morning when we woke up. After I took this picture we got another 3 inches or so. Picnic on the deck anyone? 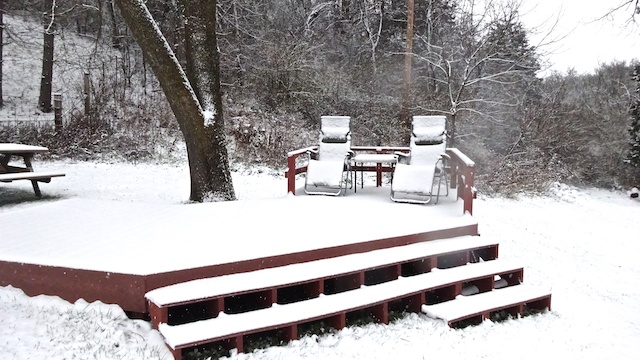 I can’t say that the sheep were equally happy, but I do love the way they look with a dusting of snow. 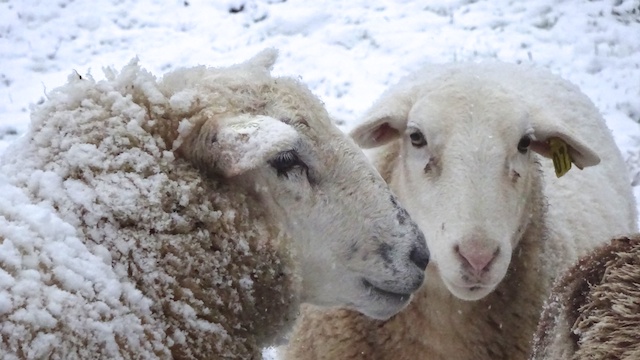 Nothing like a snowy day to call one into the kitchen to bake bread. I made “no knead” bread from the New Artisan Bread cookbook and English muffins from a King Arthur Flour mix. (King Arthur Flour–let me count the ways I love you. Now I see you have a recipe for homemade, I’ll try that next.) We had the bread with a chopped salad and Moroccan beef soup for dinner last night while the snow fell and the dogs cuddled at our feet. Sweet. 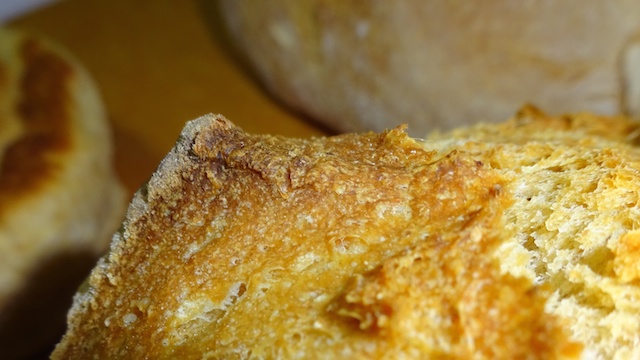