Welcome to an ongoing inquiry about the behavior of people and dogs.
Blog Home >> Animals and the People Who Love Them >> What does “Licking” Mean?

Someone once told me that her dog, Barney, was clearly anxious because she “lip licked” every time she asked him to sit or lie down. That’s seemed to be a reasonable conclusion, except that the dog’s tongue always flicked out laterally to sop up a stream of drool every time he heard the cue. I suggested that Barney was anticipating the food, and was salivating and licking in anticipation.

This incident is a great example of the pitfalls of acquired knowledge: As we improve our ability to “read” dogs, it is easy to worry about expressions or movements that might, or might not, be indicative of distress in our best friends. I thought it might be an interesting exercise to look at all the contexts in which dogs lick, and our best guesses about what it means when they do.

ANTICIPATION OF FOOD: This would seem to be a no-brainer, but can take some time to distinguish from other types. Usually, (but not always) licking in anticipation of food involves the tongue moving laterally, to the side of the dog’s mouth, while in other types of lip licks the tongue moves straight forward. Usually associated with an increase in salivation (á la Pavlov), we humans tend to do the same thing when anticipating something wonderful about to pop into our mouth. Be aware that context is key here, because I’ve seen tongues go all over the place–to the side or the front, in all possible contexts. (I do wonder sometimes if dog are lip licking both in anticipation and with one of the motivations listed below, but I’m just speculating…) 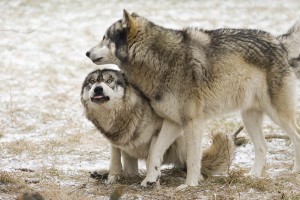 APPEASEMENT (aka Submission aka Calming Signals): In this case, the tongue usually moves out straight forward from the mouth, sometimes so far that the nose itself is licked. Often seen in social interactions, this is described as a “pacifying behavior” by Roger Abrantes (Dog Language: An Encyclopedia of Canine Behavior), or an “appeasement signal one canid uses to let others know he means no harm” by Barbara Handelman (Canine Behavior – A Photo Illustrated Handbook). Pat Goodman’s quote in Handelman’s book is one of my favorite lines about lip licking: “The canid equivalent to human fidgeting.” Many authors suggest (as do the two listed here) that this behavior originated in neonatal nursing behavior. Makes sense to me, although we are just speculating here. (Thanks to Marty Sloan from Wolf Park for this photograph.)

Here’s a good video example in a dog, making the excellent point that her dog is NOT illustrating guilt (a la the viral videos in years past), but is illustrating what the author labels as appeasement.

I think that the attribution of “appeasement” is a good one, but would add that the context and the dog’s behavior are also indicative of:

LOW LEVEL ANXIETY Lip licking is a behavior seen in many species of mammals, including horses (common) and sheep. You can find a lot of speculation about the internal state that it signifies, but low level anxiety or nervousness are common explanations. There is some good research behind this: Schilder and Borg (2004) found it to be common reaction to a shock collar in dogs, along with yelps, squeals and avoidance. In addition, Deldalle & Gaunet (2014) found that negative reinforcement (or the disappearance of an aversive stimulus) elicited more lip licks than positive reinforcement. In other species, see this blog that lists “nervousness” as one of the causes of lip licking in horses. In addition, a study on sheep’s responses to the presence of a dog (ie, potential predator) a goat, or human found that lip licking was more common in the presence of a dog.

In dogs, Rehn and Keeling (2011) looked at greeting behavior after dogs were separated from their owners for 30 minutes, two 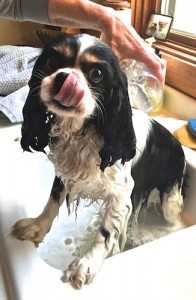 hours and four hours, and found that the longer the separation, the more lip licking and body shaking was observed when the owners returned. Body shaking is also believed to be a sign of stress reduction, and is often seen with lip licking. (As it is in the video seen above.) However, lip licking (in horses for example) is often described as occurring “after stress is relieved,” or when an animal has accepted a social hierarchy. Hmmmm…..

I find these last two categories–appeasement & anxiety– interesting, because they overlap so much. Could it be that they are expressions of similar internal states in dogs, and we just label them differently because of the context? One explanation that might cover both categories is “being in conflict.” Is that more helpful, or just more confusing? I’ll ask more about what we mean by appeasement/anxiety/conflict later in this article, because I think it’s an important question. But for now, some more categories:

REPETITIVE LICKING ONTO SUBSTRATES: “Excessive” licking be an important symptom of gastrointestinal problems. Tootsie is the poster child for this–she licks her paws and any surface (especially hard and cool ones like the floor or a wood cabinet) if I run out of Ginger-Mint drops for her tummy. There is no evidence that she has a serious medical problem, but her licking is perfectly correlated with a noisy stomach and repetitive licking of her paws or another substrate. It was a veterinary behaviorist who first told me about the link between licking and gastrointestinal problems. At that time Tootsie’s paws were salmon-colored from her licking them. We’d taken images of her paws and found some minor arthritis, and my vet thought perhaps they were causing her some pain. But once we gave her Ginger-Mint drops, the licking ceased. (The drops, labeled for dogs and cats, are from Animal’s Apawthecary.) When I run out, it begins again. A perfect correlation. There’s good research behind this: See the study by Bécuwe-Bonnet et al that found a strong correlation between dogs licking surfaces like walls and floors and gastrointestinal disturbances. But, sometimes dogs are licking themselves for other reasons besides an upset tummy…

REPETITIVE LICKING ON THE BODY: Beyond the obvious licking to clean the body, as done by all healthy cats and fastidious canines, repetitive body licking can also be related to pain or irritation. Sometimes the skin itches because of an allergy. Sometimes a minor procedure or injury has led to irritation, or perhaps it is arthritis that is bothering a dog. If your dog licks his paws or another body part often and doesn’t lick on anything else, I’d make an appointment with my veterinarian right away. We know now that “acral lick dermatitis” is often caused some type of internal discomfort (not “boredom or neurosis” as so often diagnosed in years past). Keep in mind that it can be hard to determine the cause of pain, and a “negative result” (ie, your vet can’t find anything) doesn’t necessarily mean there’s no physical cause. If the licking continues, and you are suspicious that something is causing pain or irritation, talk to your vet about trying a pain reliever on an experimental basis.

I’d love to hear your examples of how paying attention to your dog’s licking (in any context) has helped you. I wish all dog owners knew how important it was to pay attention to licking behavior. To get you started, here’s my example: I began hydrating Cool Hand Luke myself when he was dying from kidney failure, but after I did he began lip licking when I called his name. He had never done that before, and I knew that he was beginning to associate me with the discomfort of hydration, so I called the vet immediately and had them do it. That way Luke and I could spend our last few days together in peace, rather than him worrying when I was about to poke him and insert an IV into him.

One last thing that this example raises: I only knew Luke was becoming uncomfortable around me because he almost never lip licked in my presence. Willie, however, lip licks constantly, while my other Border Collie rarely does. I suspect that is because Willie is a more nervous, insecure individual than Maggie. Thus, for lip licking to be meaningful, we all need to know an individual’s “baseline.” Question for you: Beyond sharing your examples of how attending to licking has helped you understand your dog, what do you think of the “appeasement/anxiety/in conflict/out of conflict” labels. Are they helpful? Or should we be good ethologists and behaviorists and not make any attributions until we know more? I look forward to your contributions!

MEANWHILE, back on the farm: Just back on the farm actually, after a lovely long weekend in Oregon visiting grandchildren. Lucky us, the fall colors have faded here, but were in stunning in Eugene. 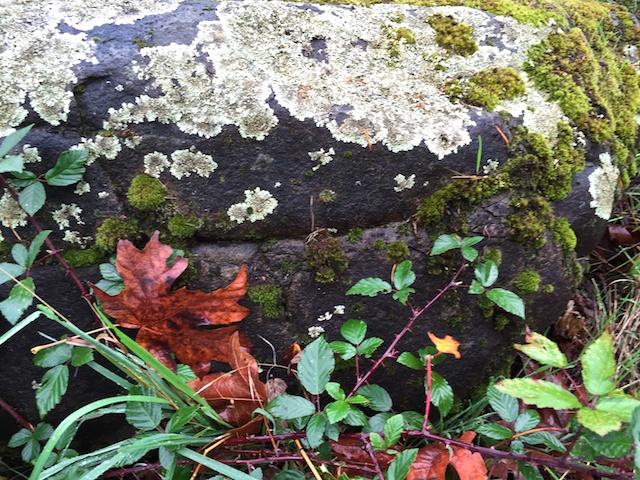 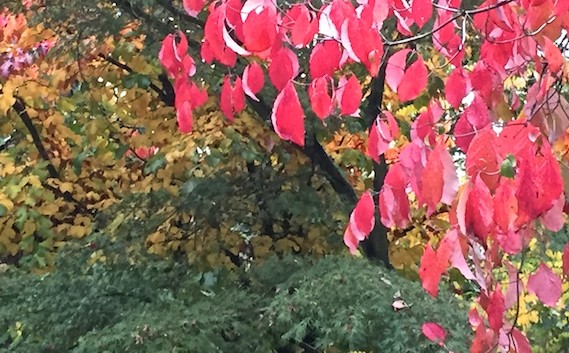 The main event at the farm this week is the arrival of Little Big Man. The ram arrived on Sunday, and got busy immediately. Lady Godiva was more than ready. I have a good photos of what happened next, but, uh, decided they were a tad too graphic. But I suspect you can make a guess. See the red on Little Big Man’s chest? That’s marking paint to let us know when each ewe gets bred. Suffice it to say that Lady Godiva’s rump was bright red this morning. Good boy, Little Big Man! 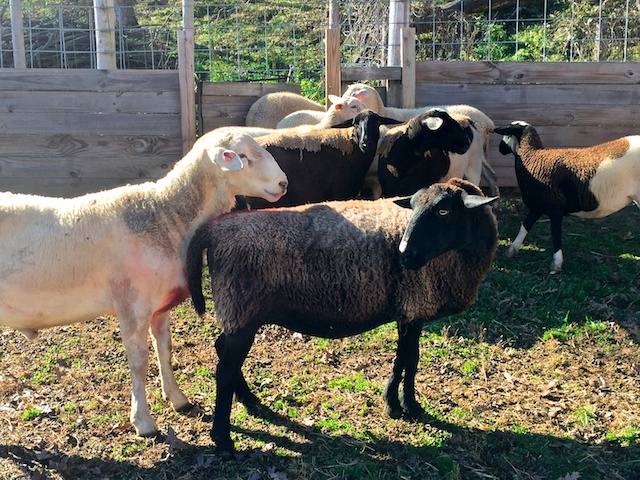 « Is Your Dog Safe Off Leash?
Cyber Solace »