Welcome to an ongoing inquiry about the behavior of people and dogs.
Blog Home >> Animals and the People Who Love Them >> What is a Dog? & Dawn of the Dog: Book Reviews

Raymond and Lorna Coppinger’s new book, What is a Dog? makes a compelling case for the “village dog” or “street dog” as THE dog, not a random collection of mongrels and strays.

“We will argue that they [street dogs] are the real dogs, the ancestral type of our modern breeds. They are unique and beautifully designed by evolution…. part of a continuous worldwide and ancient population of dogs. They are much more ancient than any “ancient breed.”

The authors support this contention, which I would agree has a great deal of merit, with general principles of behavioral ecology and their own experiences with “street, village and dump” dogs around the world. The perspective that they have gained from their travels and research around the world provides them a unique perspective, and this resulting book is well worth our attention and careful consideration. 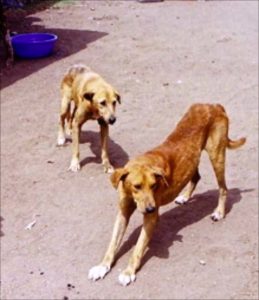 Street dogs in a village on the shore of Lake Victoria, photo by PMcC.

I was especially interested in their discussion of the behavioral ecology of street dogs and the dogs’ relationship with people. While wolves and other wild canids feed their young long after weaning, “domestic dogs” do not. The Coppingers state that although puppies in areas like the Mexico City dump are fat and well fed, and the adults seem to be in good condition, one sees few juvenile dogs. They argue that the juvenile dogs need more calories than adults, and aren’t able to obtain them unless they attach themselves to people and follow them home at night. Thus, dogs are dependent upon people no matter where they live, and no matter what age. If there’s not enough food in garbage heaps or food scraps to go around, dogs can always attach themselves to people, especially when they are still young, cute and hard to resist.

There is no question that dogs appear to be reliant on humans, whether from our food scraps, latrines, (sorry, just a fact) or commercial dog food. However, most dogs in the world can not be considered “pets.” I’ve had the same experience as the authors when asking someone in Africa (in Maasai villages in my case) “is that is your dog?” The answer is usually yes, but “my dog” means something very different from the way we generally use the phrase. As the Coppinger’s say, the weeping willow in my yard is also “my tree,” but only because it’s in my yard. I’ve no more named it than I have the weeds underneath it. Most of the people I asked had no name for the dog, and the dog looked hesitant to get anywhere near them. When I asked the Maasai why they had dogs, many of whom appeared to be starving, they said “because they bark when the lions come and threaten our cattle”. The dogs that we imagine when we hear the word “dog” are actually in a minority, and, the authors argue, are the result of artificial selection on the world’s “real dogs,” the street and village dogs of the world.

I do have some quibbles about the book. Although a discussion of behavioral ecology is important to the book, the sections could use some judicious editing. In other sections, statements are made that appear to be contradicted later in the book. (Street dogs are all said to look alike, and then, later, they are not.) The authors disagree with most geneticists that dogs and wolves are subspecies and closely related, but provide little information on their beliefs about the origin of the dog. Dogs “kidnapped” (their words) from street life and adopted to a pet’s life in first world countries are sent to an “. . .ostensibly dull life. . .” yet they say elsewhere that they don’t believe that dogs can be bored.

That said, I’d recommend reading this book if you are interested in the evolution and ecology of the dog, as well as what should be done about the vast numbers of dogs who are not pets worldwide. The Coppingers, as they often do, have given us a lot to think about. Good for them. 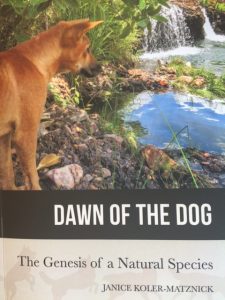 Dawn of the Dog: The Genesis of a Natural Species by Janice Koler-Matznick, just arrived on my desk recently and is a book I am very much looking forward to reading in full. I can’t yet find it on the usual book sellers, but based on a quick perusal, Ms. Koler-Matznick has made an important contribution to the question, “who and what is a dog?” It’s clear that she makes the same argument as the Coppinger’s, that dogs are not derived from wolves but are a “unique natural species” on their own. (But they still have to come from somewhere, right?) The book is richly illustrated, clearly written and appears to contain a wealth of information about the dog and its relatives. Koler-Matznick’s focus is not on street dogs, but on the dingo, the canid she’s been studying for decades. I’ll find out where you can get a copy of this book, because it looks very much like it deserves attention. Stayed tuned.

[Addendum about Dawn of the Dog, added 8-2-16] I’ve spent some time reading through Dawn of the Dog since writing this blog yesterday, and want to add that this book contains a wealth of scientific information that deserves our attention. Koler-Matznick argues that dogs and wolves share ancestors, but that dogs were generalist “predators and scavengers more omnivorous than the wolf.” In that sense her book follows Coppinger’s, but she does not agree that dogs “began” as creatures adapting to the new niche of human community, but that dogs existed, as sister species of wolves, long before humans began to live in large enough communities to create garbage dumps.

One of my criticisms of the Coppinger book is that it is light on science, and heavy on anecdotes and speculation. Dawn of the Dog, on the other hand, is well-researched and full of the kind of citations that make its arguments compelling. Having looked at both books now, I’d argue that both the Coppingers and Koler-Matznick make convincing arguments that dogs are, and have been, their own species for a very long time, but Dawn of the Dog contains the science that suggests how that might have happened. I just found out that the ISBN # of the book is: ISBN-978-0-9974902-0-6. It’s official pub date is August 15th, but you can order it from any bookseller.

MEANWHILE, back on the farm: The midsummer flowers are beginning to fade, and the birds and insects are getting all the nutrition that they can from them. One of my perennial gardens has a lot of Bee Balm in it, and the hummingbirds couldn’t get enough of it’s nectar. Two female Ruby Throats spent no small amount of energy chasing each other off in between bouts of feeding.

That wasn’t all who visited the flowers. Five or six hummingbird moths, Hemaris Thysbe, visited too, along with numerous species of bees, wasps and flies. I watched for interactions between the hummers (bird versus insect), but they each appeared to ignore each other. That’s to be expected, resource guarding is generally between members of the same species. I wonder if each species is able to utilize a different area of the flower for nectar? Whether they do or not, watching the hummers and hummingbird moths was one of the best parts of my weekend. Lucky me. 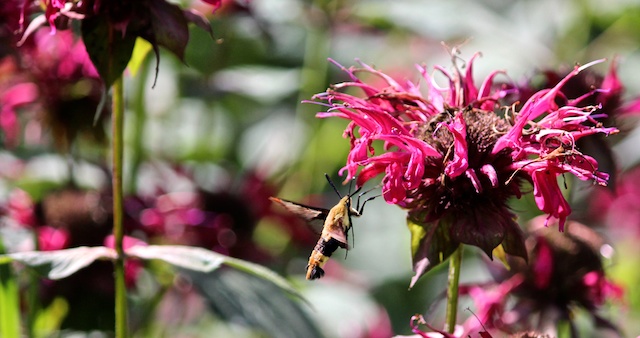